The BJP expelled its jailed MLA Kuldeep Singh Sengar, accused of raping a minor girl from Unnao and threatening her family. 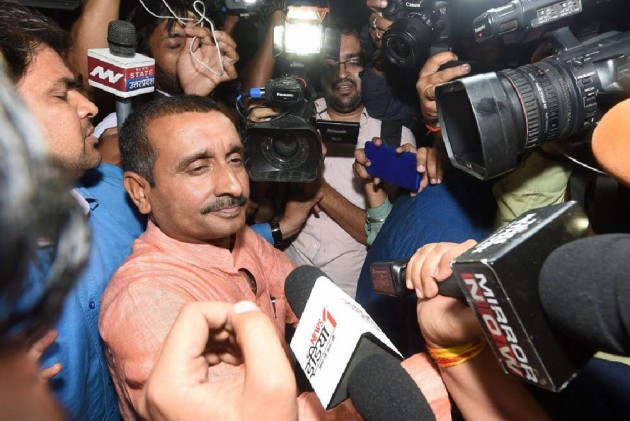 Hours after Unnao rape case accused MLA Kuldeep Sengar was expelled from the BJP, Congress general secretary Priyanka Gandhi Vadra on Thursday said the BJP has finally acknowledged having empowered a criminal and taken some action to correct itself.

Faced with massive public outrage, the BJP expelled its jailed MLA, accused of raping a minor girl from Unnao and threatening her family.

"The BJP finally acknowledges having empowered a criminal and takes some action to correct itself and move in the direction of justice for a young woman who has suffered immeasurably," Priyanka Gandhi said in a tweet.

The action by the BJP against the four-time MLA came days after the woman and her lawyer were critically injured and two of her aunts killed when their car was hit by a speeding truck in Rae Bareli in Uttar Pradesh.

The girl's family has alleged that the accident on Sunday was an attempt to eliminate her.

On Thursday, the Supreme Court also directed the transfer of all five cases registered in connection with the Unnao rape incident from a court in Uttar Pradesh to a court in the national capital.

The court also directed the Uttar Pradesh government to provide Rs 25 lakh to the rape survivor as an interim compensation.

"Grateful to the SC for taking cognisance of the 'Jungle Raj' being unleashed in UP," Priyanka Gandhi said in a tweet, responding to the Supreme Court's order.

Earlier, Priyanka Gandhi said the question on the minds of all women and girls in Uttar Pradesh is whether voices against a resourceful person, who has done wrong, will be heard.

Her remarks came after a girl student in Barabanki in Uttar Pradesh on Wednesday asked a senior police officer if she would face the same fate as the Unnao rape victim, who was recently injured in an accident.

In a tweet in Hindi, Priyanka Gandhi said, "'If some resourceful person does anything wrong then will our voices against him be heard'. This is the question posed to the Uttar Pradesh government by a girl student from Barabanki at a girls awareness rally".

"This question is on the minds of all girls and women in UP. BJP must answer," she said.