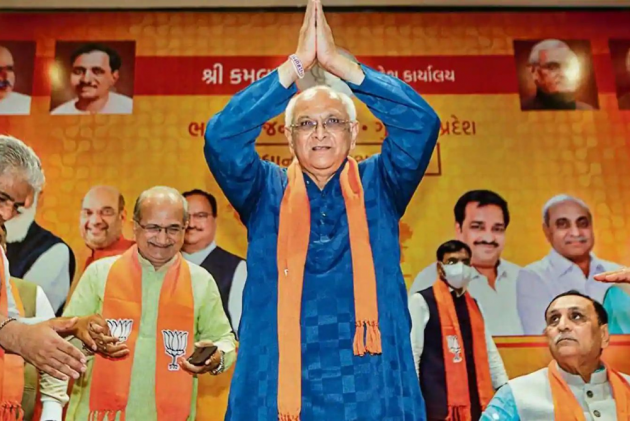 No minister from the earlier Vijay Rupani-led ministry was inducted.

Bhupendra Patel, who was sworn in as the 17th chief minister of the state on Monday, was present at the Raj Bhavan ceremony, along with Rupani, whose sudden resignation from the post on Saturday led to the formation of the new ministry.

The 'No Repeat Formula'

There has been some suspense over who will get the ministerial berth in the new cabinet, in the backdrop of the BJP's "no-repeat" formula. According to reports, the BJP has changed all the faces from the former Vijay Rupani cabinet, even some senior ones.

Many believe that the "no-repeat" formula has been proposed keeping in mind the 2022 Assembly polls as the BJP, which has been in power in Gujarat for more than two decades, wants to go to voters with a clean slate.

While there has been no word from the BJP on the matter of ministerial candidates yet, the official Twitter account of Gujarat CMO tweeted ahead of the swearing-in that the first Cabinet meeting is set to be held at 4.30 pm at Gandhinagar today.

The first cabinet meeting of the Council of Ministers to be chaired by CM Shri @Bhupendrapbjp will take place at 4.30 pm today at Gandhinagar.

On Wednesday evening, the Chief Minister's Office announced that the swearing-in ceremony of new ministers will be held at 1.30 pm at the Raj Bhavan in the state capital Gandhinagar on Thursday.

Patel (59), a first-time MLA from Ahmedabad, took over as the new Gujarat chief minister on Monday after the sudden resignation of Vijay Rupani last Saturday.

Earlier, the ruling BJP announced that the swearing-in ceremony would be held on Wednesday afternoon and preparations for the same had started at the governor's house in the state capital.

However, the plan was later dropped all of a sudden and banners of the swearing-in ceremony were also taken down.

Neither the BJP nor the state government gave any reason for the postponement.