This year, the first locust attack happened on May 11 in Sri Ganganagar and Hanumangarh districts of Rajasthan. So far, 90,000 hectares in 20 districts have been affected due to the locust attack.

Ever since the first locust attack happened in Barmer in May last year, Sher Singh Thakur is having sleepless nights. His village Tambor is only two kilometres from the India-Pakistan border. The fear of locusts attacking his crop has forced him to sleep in his farm during the nights. For the same purpose, he has made a makeshift shack there. But he does something strange too every night – he switches on a radio in full volume, for he believes it will keep the locusts away. Most other farmers in the area, too, are sleeping in the farms with loud music being blared by a radio or a speaker.

In a bid to ward off the tropical grasshoppers that have been destroying crops for a year now, farmers are trying all sorts of creative methods – beating ‘thalis’, bursting crackers, playing drums, using DJ, radio and loudspeakers, and even revving their tractors. "I have spent most nights in the past year looking out for locusts. As soon as they would arrive in the field, I would play radio at full volume and also turn on the tractor. I have removed its silencer to get more sound,” says Thakur. The technique is helpful, he adds, but next night the locusts would quietly attack the field again.

In 2019, locusts invaded Rajasthan after a gap of 26 years. Swarms of locusts, coming from Pakistan’s Sindh province, entered several districts of Rajasthan. According to experts, last year it was the mature locusts which destroyed thousands of hectares of crop. Until February this year, they had damaged crops across 6,70,000 hectares in 12 districts with an estimated loss of about Rs 1,000 crore. The figures were revealed by the State Agriculture Commission. 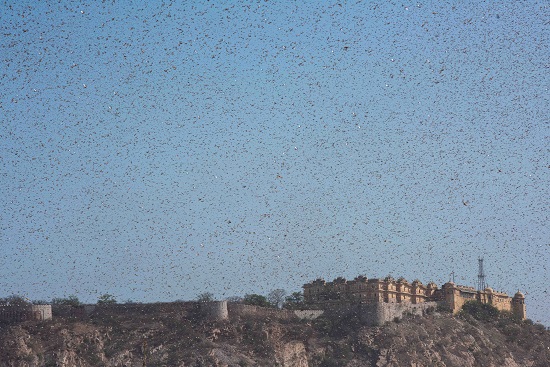 Locust invasion in walled city of Jaipur with Nahargarh fort in the backdrop. Photo by Anchit Natha

"Most of the border villages have been affected by locusts. Last year's Kharif crop was fully destroyed as we were not well-equipped to deal with swarm invasion. Now, all of us have installed sprayers at the back of a tractor and we spray pesticides regularly,” says Hindu Singh Tamlor, president of Barmer’s Zila Adhyaksh Sarpanch committee. “This year we will sow Bajra, Gwaar and Moong in the Kharif season. The cumin seeds that we had sown earlier have been partially damaged by the swarm invasion.”

As per Grameen Kisaan Mazdoor Samiti (GKS), farmers in the state are facing a shortage of equipment and pesticides to fight locusts. "The state government should seek help from the Air Force and encourage aerial spray of pesticides as it can reach places where regular sprayers cannot. Locusts often sit on tall trees and we can’t spray pesticides there,” says Ranjit Raju Singh, GKS convenor in Sri Ganganagar.

Raju, who owns five hectares of farm land in Karanpur tehsil, tried materials used in crackers to create noise in his farms and keep the locusts away.

Flying in search of Food

Om Prakash, commissioner in the agriculture department, says that this time there was minimum damage to agriculture because there was no standing crop in the field. “But the cotton crop in 4,000 hectares in Sri Ganganagar and 100 hectares in Nagaur has been destroyed. However, this year locusts are immature and when they start breeding, there will be more threat. It could lead to an agrarian disaster. Moreover, they also have a longer lifespan.”

"Locusts that entered India were about 10-12 days old and were flying great distances in search of food. Since the Rabi crop harvesting is over and the Kharif sowing season is yet to begin, they were unable to find settling grounds and crops to eat. That is why the locust swarms are travelling far in search of food,” he adds. 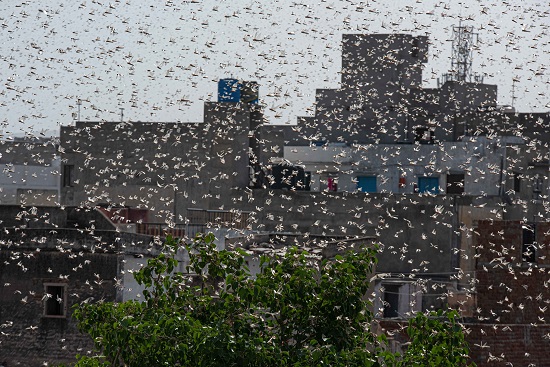 Pink Locusts attack continues in various parts of Rajasthan. So far 20 districts have been affected. Photo by Anchit Natha

Swarms of locusts can travel up to 150 km a day and with a speed of 15-20 km per hour. During the nights, they become irritable and fly away at the sound of tractors or at sight of light, when control operations are launched by the administration.

This year, the first locust attack happened on May 11 in Sri Ganganagar and Hanumangarh districts. So far, 90,000 hectares in 20 districts of Rajasthan have been affected due to the locust attack. Swarms of locusts moved from Sri Ganganagar, Nagaur, Jaipur, Dausa, Karauli and Swai Madhopur in Rajasthan towards districts in Uttar Pradesh and Madhya Pradesh.

Two drones have been deployed for the purpose. The little machines can spray pesticides over two acres of land during a flight of 12-15 minutes. As per the LWO official, the locusts attacking the crops are pink in colour but will soon turn yellow. “Now they will start laying eggs after the onset of monsoon and continue breeding for two more months. The size of these swarms can vary – from less than one square kilometre to several hundred square kilometres. A one square kilometre swarm contains about 40 million locusts. In a day, they can eat as much food as 35,000 people would, in the same time frame.”

Rajasthan chief minister Ashok Gehlot has directed district collectors of locust-hit districts to purchase 100 fire-fighting vehicles. For each district, a relief of Rs 1.47 crore will be given to buy tractor mounted sprayers and necessary pesticides. The agriculture department has carried out locust control operations on 67,000 hectares.

The Food and Agriculture Organisation (FAO) of United Naitons has warned of another locust invasion in July. Earlier, it had warned of the attack in May-June this year. The crop-munching grasshoppers emerge from eastern Africa and travel through Saudi Arabia and Iran to enter Pakistan and subsequently India.