22-year-old Ashfaq Hussain received five bullet shots in his chest, shoulder and neck, and two sword wounds, his mother said as she waited for her son’s post-mortem report outside GTB Hospital. 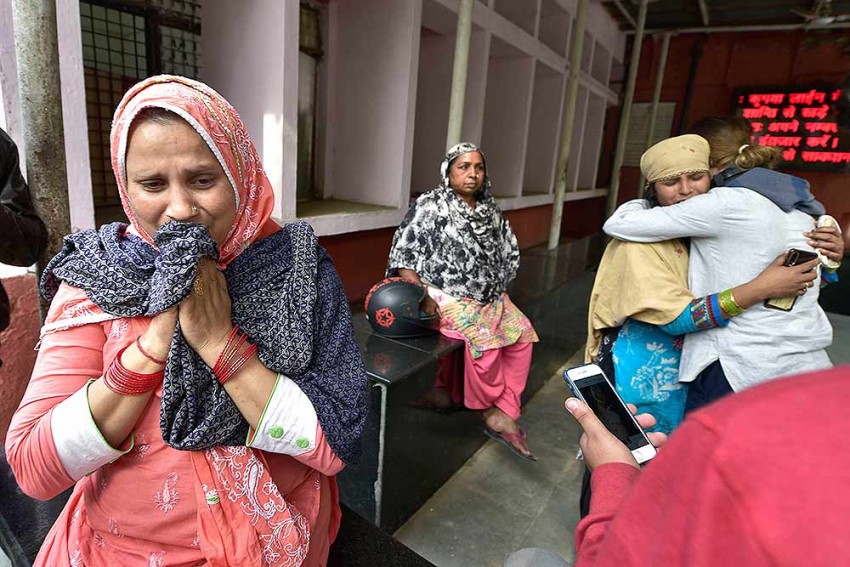 Azra Khatun weeps as she waits to receive the body of her nephew Ashfaq Hussain (22), who was killed during communal violence in northeast Delhi area over the amended citizenship law, outside the mortuary of GTB hospital in New Delhi.
PTI Photo
Aritry Das 2020-02-27T19:20:56+05:30 As Uneasy Calm Prevails Over Northeast Delhi, Victims Share Stories Of Their Ordeal 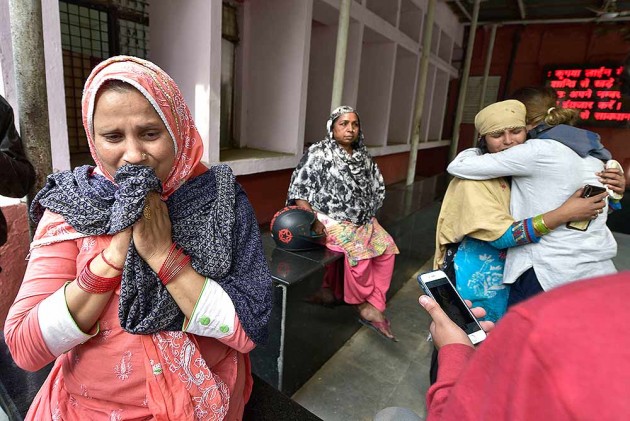 As rioters raged through neighbourhoods of Northeast Delhi for three days, killing people, burning down houses, shops and mosques, an uneasy calm has now set upon the area.

34 people have lost their lives so far after communal violence broke out in Seelampur, Jaffrabad, Maujpur, Mustafabad, Chand Bagh and other parts of Delhi on Monday. Over 200 people have also sustained injuries.

22-year-old Ashfaq Hussain is one of those 34 people. He received five bullet shots in his chest, shoulder and neck, and two sword wounds, his aunt said as she waited for her son’s post-mortem report outside GTB Hospital.

Hussain used to work at an electronics store and had gone out to work on Tuesday morning. As the family started receiving news of violence near their house in Mustafabad, they called Hussain and asked him to return home.

“But he never came back home,” Arza Khatun, his aunt, said as she broke down in tears. “He just got married on Februay 14,” she added.

At around 7 pm on Tuesday, the family received a call from Hussain’s friends, informing them of his death.

“He had been taken to the Al Hind Hospital but he had already died near the Brijpuri pool. His friends said he died due to police firing when stone-pelting was happening,” Khatun said.

Hussain’s was one of the two dead bodies that remained at Al Hind hospital on Tuesday night for hours. Due to lack of ambulance and police assistance, they could not be taken to GTB Hospital for post-mortem. Only after the Delhi High Court, in a special midnight hearing, directed the police to ensure safe passage and emergency treatment for the injured was Hussain's body taken to the GTB hospital for post-mortem.

As the family waited for Hussain’s body, they alleged that the hospital administration had not conducted the post-mortem and there were continuous delays.

However, Dr Sunil Kumar, the medical director of GTB Hospital, said the post-mortems were not delayed and they had sufficient infrastructure to conduct the procedure.

Kumar also said that there were 44 injured people admitted at the hospital with head, abdomen and limb injuries. The body of an IB official, who lost his life in the riots, was also at the hospital, Kumar said, but he could not confirm if the post-mortem had been done on his body.

Near Gokulpuri, 35-year-old Musharraf was killed by a mob of 40-50 people which entered his three-storey rented house on Tuesday evening after breaking the lock. Musharaff was on the third floor with his wife, two sisters and two children.

The women hid him under the bed and pleaded the mob to not hurt him. But they pulled him out and beat him with sticks and broke his head in front of his family.

"He was dead but they were still not done," said a family member, unwilling to reveal his identity. They dragged his body down to the street and dumped it in the canal beside the house, he said.

On Wednesday, GTB hospital authorities called the family and informed them that they found a body in the canal in Bhagirathi Vihar. Ashraf, Musharraf's father, identified the body in the morgue.

“We don’t want to fight. We want peace,” said Mohammad Shakeel, who witnessed a mob attack in Shiv Vihar.

Shakeel was in Lok Nayak Hospital where his brother has been admitted with acid attack injuries. Shakeel also suffered injuries on his right leg, which he showed to this reporter as he pulled up his trouser tattered with acid burns.

Describing the horror he witnessed on Tuesday, Shakeel said, “There were two groups of people in our lane pelting stones at each other. I was on the roof of my uncle’s house with my brother, his wife and two nephews. Someone from the mob threw an acid bomb on the terrace and it hit my brother’s face.”

He worried that his brother may never be able to see from one eye again. “Doctors are not taking much care of him. They did not even dress his wound properly,” he said. Shakeel’s brother, Mohammad Waqil, was also admitted in the emergency ward with a burnt face and a loose piece of gauze hanging from his right eye.

Following the acid attack, they all ran to the nearby Madina Masjid as they believed that its strong gates would keep the rioters out. However, the gates were broken down by a mob that brought gas cylinders and tried to burn down a portion of the mosque, Shakil said.

Most of the eyewitnesses of violence claim that all attackers were from outsiders and they did not face any threats from local residents.

“Even our Hindu friends do not know where these people came from. I live in Maujpur and mine is the only Muslim family in the area. But no one from the locality ever threatened us,” said Danish Sheikh.