This comes within hours of Priyanka accusing the Yogi Adityanath-led government of playing politics over the former's offer by demanding the buses be made available in Lucknow. 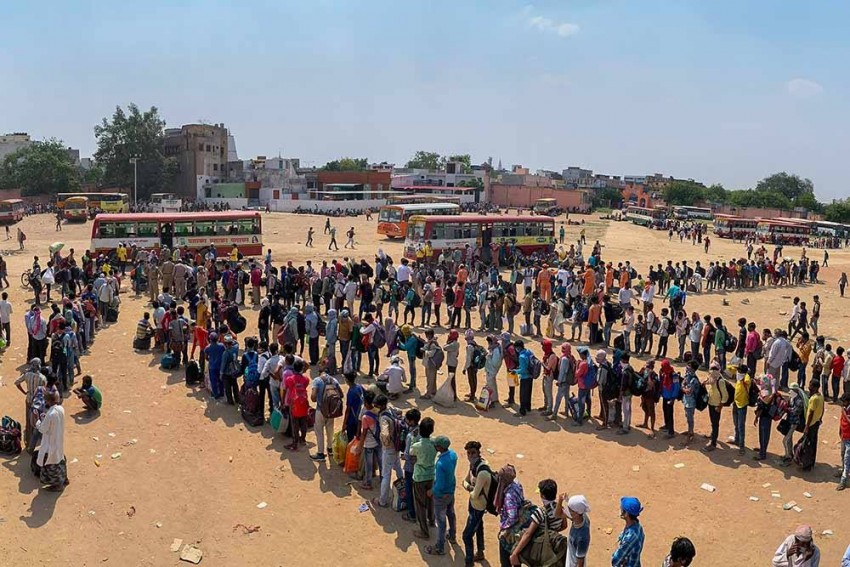 A panoramic view shows migrants waiting to board buses to reach Ghaziabad railway station as part of their journey to travel to their native places, during the ongoing COVID-19 nationwide lockdown, at Ramlila ground in Ghaziabad. (PTI)
Outlook Web Bureau 2020-05-19T11:51:41+05:30 Congress Seeks More Time After UP Govt Asks Priyanka To Arrange Buses In Ghaziabad, Gautam Buddh Nagar By Noon 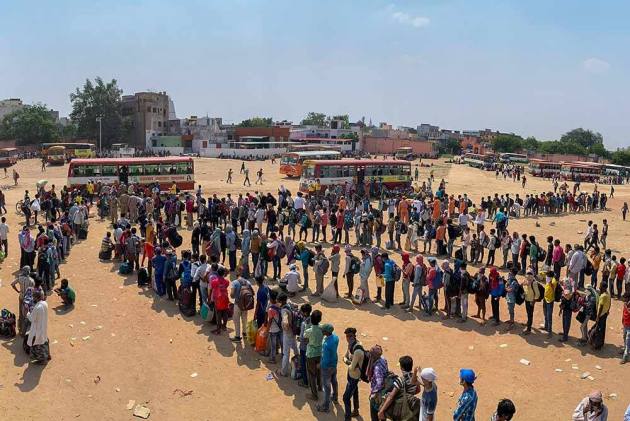 The Uttar Pradesh government on Tuesday morning asked Congress General Secretary Priyanka Gandhi Vadra to arrange for 500 buses by noon in Ghaziabad and hand over another 500 to the District Magistrate of Gautam Buddh Nagar, at the ground near Expo Mart. Now, Congress has sought more time, saying the buses are coming from Rajasthan.

In a letter written to Vadra's private secretary Sandeep Singh, UP's Additional Chief Secretary (Home) Awanish Awasthi said, "As per your letter dated May 19, you have expressed your inability to provide buses in Lucknow, and want to provide them in Ghaziabad and Noida."

"Please provide 500 buses to the District Magistrate, Ghaziabad, by 12.00 noon. The DM Ghaziabad has been informed about this. The district administration will receive all the buses and utilise them," he said.

The buses should be provided at Kaushambi and Sahibabad bus stands, he said in the letter.

He also said, "500 buses should be provided to the District Magistrate of Gautam Buddh Nagar at the ground near the Expo Mart."

Directions have been issued to the district magistrates to utilise the buses immediately after checking the permit, fitness, insurance, driving licences of the drivers and details of the conductors, Awasthi said.

Reacting to Yogi government's time-bound demand, Congress said that it needed more time to arrange for buses. Sandeep Singh, personal secretary to Congress General Secretary Priyanka Gandhi Vadra has sent another letter to Additional Chief Secretary (Home) Avanish Awasthi, saying that it would be possible for the party to get the buses by 5 p.m.

Earlier in the day, Priyanka had accused the Yogi Adityanath-led government of playing politics over the former's offer by demanding the buses be made available in Lucknow.

Priyanka also alleged that the demand showed the UP government lacked the intention to help those stranded at the state's borders.

The UP government had on Monday accepted the Congress' offer to run 1,000 buses to bring migrant labourers back to the state, a proposal which had triggered a war of words between the two sides.

Earlier, in a letter to Additional Chief Secretary Avneesh Kumar Awasthi, Priyanka Gandhi's private secretary Sandeep Singh, said a letter was received from the UP official via email, in which it has been stated that 1,000 buses with all documents be handed over at Lucknow by 10 am on Tuesday.

"In a situation when thousands of workers are walking on the streets and thousands of people have gathered at the UP borders at various registration centres, sending 1,000 empty buses to Lucknow is not only a waste of time and resources but is also inhuman and the product of an anti-poor mindset," Singh said in the letter in Hindi.

"This demand of your government seems politically motivated. It does not seem that your government wants to help our labourer brothers and sisters who are facing a disaster," the letter said.

"In the letter dated May 16, Congress general secretary Priyanka Gandhi Vadra has sought permission to run 500 buses from Ghazipur border in Ghaziabad and 500 buses from Noida border to help the stranded migrant labourers reach home. In this context, at 4.01 pm (on May 18), I got your letter (through WhatsApp) seeking a list of 1,000 buses along with details of drivers and conductors. This was provided to you after some time through email," it said.