The virtual rally has set the stage for an electoral slugfest between arch-rivals -- the NDA and the RJD-led opposition -- regardless of the BJP’s claim that it was neither a political nor an electoral exercise. 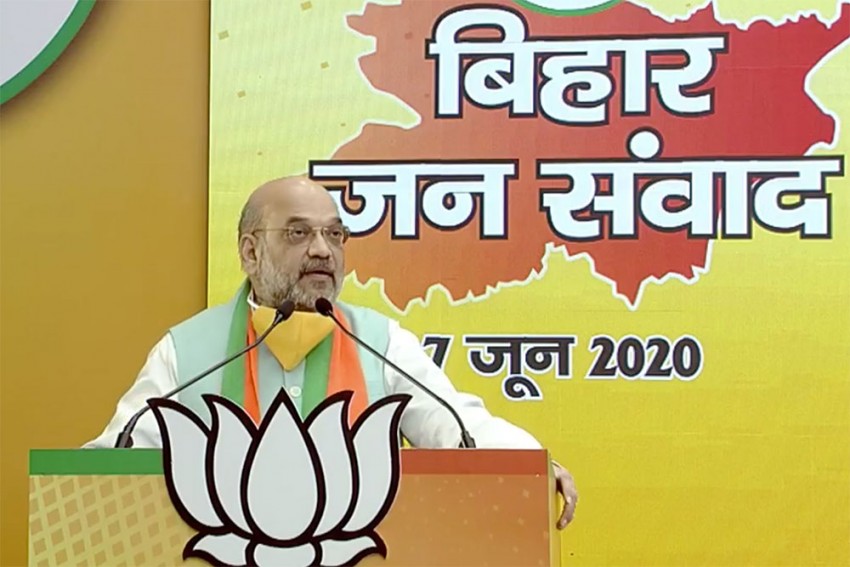 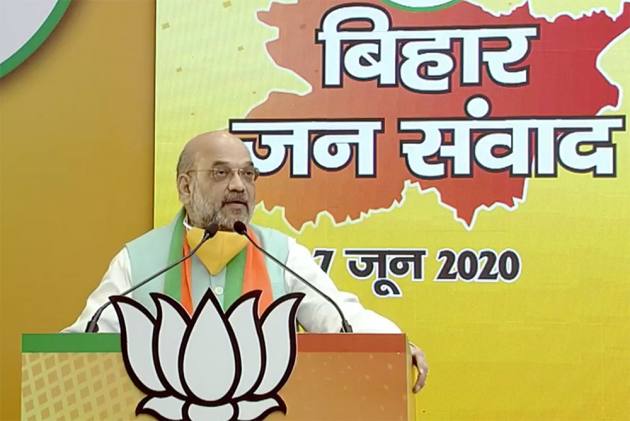 The Bharatiya Janata Party’s eagerly-awaited Bihar Jansamvad Rally, the first of the 75 virtual rallies planned by the saffron outfit as part of its mission to bring together people in the fight against the novel coronavirus, may not have been dubbed as an electoral exercise by Union Home minister Amit Shah, but it appears to have set the template for the poll campaign likely to be adapted by most of the parties in the upcoming assembly elections in the state.

In his 45-minute address to the BJP workers at 72,000 booths spread across Bihar, Shah on Sunday emphasised that the virtual rally had nothing to do with the upcoming elections in Bihar. However, he chose to read out a long list of achievements of the Narendra Modi government at the Centre as well as the Nitish Kumar government, touching upon all the key issues, from abrogation of Article 370 and 35A, Ram Janmabhoomi and triple talaq to the latest migrant crisis during lockdown.

Giving details of all the major work done by the Centre and the state government to ameliorate the lot of the poor through various welfare schemes before and during the COVID-19 crisis, Shah ended his speech with a hope that the people of Bihar would vote the Nitish Kumar government back to power with a two-thirds majority this time.

Among other things, the Union minister dwelt at length on all the measures initiated by the NDA government to mitigate the plight of migrants after they began to return home during the lockdown. He asked the Opposition to explain as to what it had done for them. Without naming Rashtriya Janata Dal (RJD) leader Tejashwi Yadav, who had remained stranded in Delhi for nearly two months due to lockdown, Shah said that certain leaders who were criticising the government should reveal where they were in this period.

The RJD had apparently seen it coming. Earlier in the day, the party leaders led by former chief minister Rabri Devi and her two sons – Tejashwi and Tej Pratap Yadav -- clanged thalis and other utensils to protest against Shah’s virtual rally. They alleged that the BJP had chosen to celebrate with a digital rally while the nation was still caught in the middle of a global pandemic.

The virtual rally, therefore, has set the stage for the electoral slugfest between the arch-rivals -- the NDA and the RJD-led opposition -- regardless of the BJP’s claim that it was neither a political nor an electoral exercise. It also seems to suggest that the polls, which are due to be held in October-November this year, may well be held on time.

Bihar is the first state in the country slated to go for polls since the outbreak of the deadly contagion but until now, the clouds of uncertainty had been hovering over whether they would be held on time.

Political observers believe that the BJP has seized the initiative to connect with the voters through this rally. It also gives an indication of how virtual rallies may play an important role in reaching out to the voters in the run-up to the polls if the threat of coronavirus does not subside in the weeks to come. The Election Commission of India has to issue a notification regarding Bihar polls latest by September and a new government has to be sworn in by the end of November this year.

Given the fact that none of the political parties will have enough time to organise public rallies because of the need for social distancing, virtual rallies are likely to be the most potent tool to drum up support of the people both by the ruling alliance and the Opposition in the electoral battle ahead.

Amit Shah Says Virtual Rally Not For Bihar Polls, But 'NDA Will Get Two-third Majority'