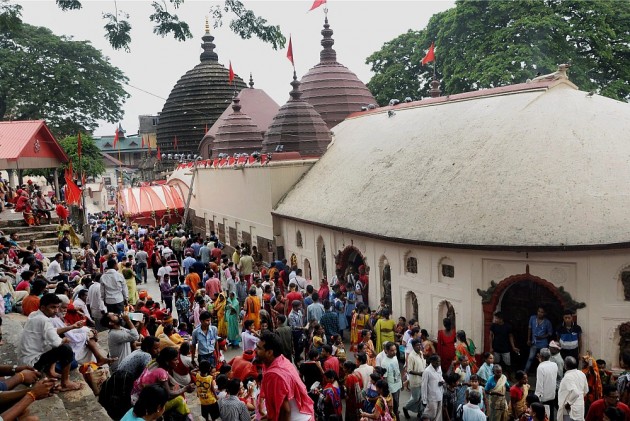 The famous Ambubachi mela, eastern India’s largest religious congregation, has begun at the Kamakhya temple, atop the Nilachal hills in Guwahati from Saturday.

Lakhs of devotees belonging to the Shakti sect of Hinduism from across the country and abroad take part in the Ambubachi mela, which is believed to be the seat of tantric cult. The festival will continue till June 25.

Menses: A Medical History In Fatuity

“Devotees from around the country and the world receive Maa Kamakhya’s blessings during Ambubachi Mela and the power of these blessings enables them to contribute meaningfully to sustain an environment of peace and harmony in the world.” Sarbananda Sonowal said.

Saying that Ambubachi Mela provided an opportunity to welcome tourists and devotees from different parts of the country as well as the world, Sonowal added that all efforts had been taken to sustain the success of last three years’ in organising the Mela on a grand scale.

Ambubachi Mela, also known as Ambubasi festival, is held annually during monsoon which is closely related to the tantric cult and is also known as Kamkhya Devi Puja. It is believed that Goddess Kamakhya goes through her menstrual cycle during these days and therefore the temple remains closed for the next four days.

When the temple doors are opened, the devotees wait outside the temple to receive the unique ‘prasad’ which is small bits of cloth, which is supposedly moist with the menstrual fluid of Goddess Kamakhya. It is considered highly auspicious and powerful.

Prahlad Singh Patel said that he was fortunate to get the opportunity to attend Ambubachi Mela as the first programme after assuming office and he stressed on the need to explore more prospects for developing tourism in the state taking advantage of vast natural resources.

Last year, more than 20 lakh devotees and tourists visited the festival and the organizers are expecting around 25 lakh visitors this year.