A total of 38 IAF aircraft and four planes of the Indian Army participated in the flypast on Tuesday. 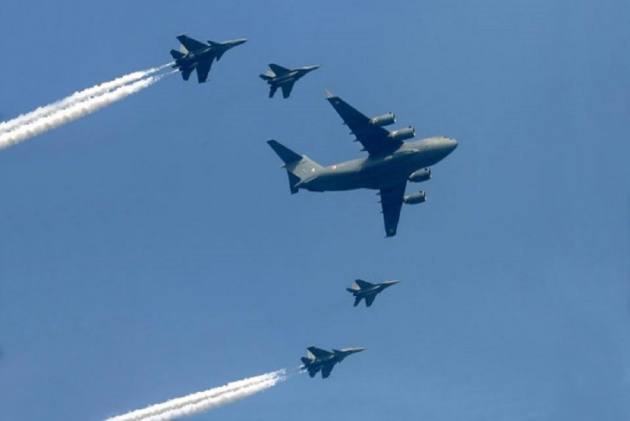 The Rafale fighter aircraft, the most recent addition to India's fleet of carriers, featured for the first time today in India's Republic Day flypast, with a 25,000-strong audience in attendance.

Also Read: Republic Day In The Time Of Covid

The aircraft carried out one formation -- the Brahmastra -- along and took part in the "Eklavya" formation along with four other fighter jets. The latter was performed at a height of around 300 metres along with two Jaguar and two MIG-29 aircraft. The five jets resembled a V shape with Rafale leading the pack.

The Rafale fighter jet was visible again when it culminated the flypast by conducting the Brahmastra formation wherein it traversed at a low altitude for some distance, then pulled up vertically at 90 degrees and conducted rolls before stabilising at a higher altitude.

A total of 38 IAF aircraft and four planes of the Indian Army participated in the flypast on Tuesday.

As is traditionally the case on Republic Day, flypast was divided into two blocks: the first was along with the parade and the second was after the parade.

In the first block, there were three formations. The first was the ''Nishan'' formation comprising of four Mi17V5 aircraft that carried the national flag and logos of all three services.

It was followed by the ''Dhruv'' formation by four helicopters of Army Aviation Corps.

The last was the ''Rudra'' formation -- comprising a single Dakota aircraft flanked by two Mi17V5 helicopters -- which celebrated the 50th anniversary of the country's victory in the 1971 war.

Dakotas played a major role during that war. On December 16 last year, India launched year-long celebrations of its victory over Pakistan in the 1971 war that led to the creation of Bangladesh.

The second block of the flypast consisted of nine formations.

Indigenously developed next-generation anti-radiation missile Rudram and anti-tank guided missile Dhruvastra were displayed on the LCA and the LCH respectively, on the tableaus.

The IAF's marching contingent at the parade consisted of four officers and 96 soldiers marching in a box formation of 12 rows and eight columns.