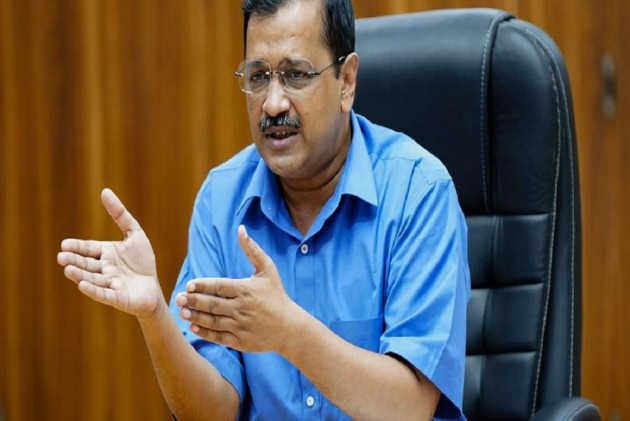 Delhi Chief Minister Arvind Kejriwal on Monday said the new farm laws will lead to immense inflation and will only favour a few capitalists, as he termed the legislations "anti-farmer and anti-common man".

Kejriwal, who joined AAP leaders, MLAs and volunteers at the party office in observing a day-long fast in support of the protesting farmers, said the new farm laws "gives license to inflate".

Farmer leaders on Monday started their day-long hunger strike against the Centre's new farm laws and said protests will be held at all district headquarters later in the day, even as more people are expected to join the ongoing agitation at Delhi border points.

'Do You Have No Shame?' Asks Amarinder On Kejriwal's Support To Farmers' Fast

Addressing volunteers, Kejriwal said this law says people can hoard as much as they want.

"I appeal to parties to stop playing dirty politics over farmers' issue. These laws are anti-farmer and anti-aam aadmi and are aimed to benefit a few capitalists. These laws will lead to immense inflation through hoarding. These legislations gives license to inflate," Kejriwal said.

Due to these laws, wheat will become four times more expensive in the coming years, he said.

Kejriwal said the AAP stands in solidarity with the farmers.

He claimed that the Centre is angry with him for supporting the farmers.

"When we were asked to give stadiums to convert them into temporary jails, we refused. I also went to serve the farmers as 'sewadaar'. This angered these people a lot. My doors were closed when I wanted to go and support the farmers' protest," he said, referring to his alleged house arrest last week when ''Bharat Bandh'' was observed.

Speaking to reporters, Deputy Chief Minister Manish Sisodia said the farmers are very unhappy with the three black laws of the central government.

"The central government should leave its arrogance and withdraw all three laws. The Aam Aadmi Party is observing fast in support of the farmers," Sisodia said.

However, the protesting farmers have expressed apprehension that the new laws would pave the way for eliminating the safety cushion of minimum support price (MSP) and do away with the mandi system, leaving them at the mercy of big corporates.