A team of NTPC, THDC and SJVNL officials will visit the project site to ascertain the causes behind the damage in the Avalanche 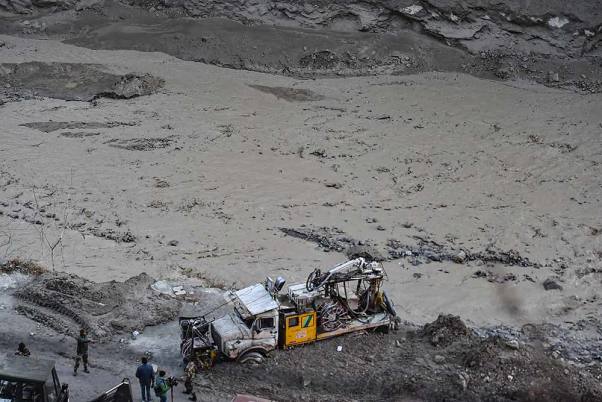 A vehicle stuck in the debris at the site of the Tapovan hydel project as rescue works undeway, a day after a glacier broke off in Joshimath causing massive flood in Dhauli Ganga River, in Chamoli district of Uttarakhand.
PTI photo
Outlook Web Bureau 2021-02-09T10:07:17+05:30 Action Plan: NTPC To Install Early Warning System At Project Sites In Hills After Uttarakhand Flood

NTPC will install early warning systems in its projects located in hill states prone to natural disasters, Union Power Minister R K Singh said on his return from an on the spot assessment of the state-run power producer's damaged hydel project at Tapovan on Monday.

He also announced a compensation of Rs 20 lakh each to the families of deceased NTPC workers in the avalanche.

Singh who was talking to reporters at the Jollygrant airport in Dehradun on his way back to Delhi said the snow slide which brought a deluge in the Rishi Ganga river on Sunday was huge but the barrage built at the NTPC project bore the brunt of it and helped save villages downstream from massive devastation.

"The private hydel project in Rishi Ganga was totally washed away while the NTPC's Tapovan-Vishnugad hydel project also suffered major damage but owing to the solid structure of its barrage, the torrents of muddy water and silt could not cause much damage to villages located downstream," Singh said.

However, drawing lessons from the calamity it has been decided to install early warning systems in NTPC projects in all hill states which are vulnerable to natural disasters like avalanches, he said.

A team of NTPC, THDC and SJVNL officials will visit the project site to ascertain the causes behind the damage done on the basis of ISRO images.

He also said people of the flood-hit villages will be given a chance to work in NTPC projects if they want.

Earlier, after inspecting the project site in Tapovan, Singh said an estimated loss of Rs 1500 crore has been done to the project.