Kejriwal said that the 2019 election is to save the nation, save the Constitution. 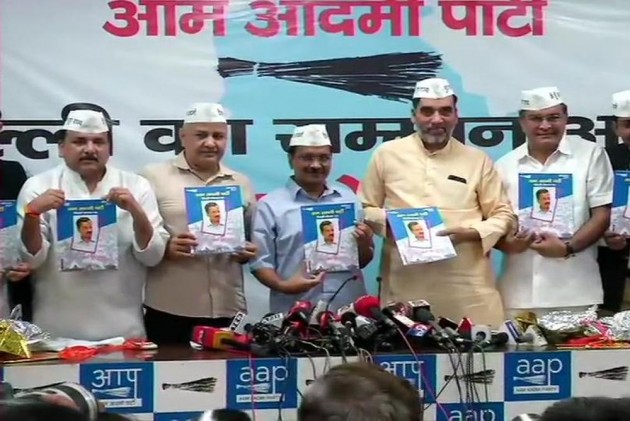 The Aam Aadmi Party came out with its manifesto for the Lok Sabha election based on the central theme of full statehood, giving a detailed analysis of what more can be done by the party if the status is granted.

The manifesto, released by AAP convenor and Delhi Chief Minister Arvind Kejriwal, has been divided into two sections -- one about what the party did without full statehood and what they will do in if it is granted.

It counters the perception that Delhi cannot be granted full statehood as New Delhi is the national capital.

"A simple comparison of powers of Delhi government and that of the local city governments of national capitals around the world makes it clear that India has the most regressive form of governance for its national capital," the manifesto said.

The manifesto has a chart that gives a comparison between Delhi and London, Berlin, Moscow, Mexico City, Ottawa and Washington City, and how all the other national capitals has power over local police, appointment and transfer of officials, land and city planning, housing, traffic and transport planning and control over local bodies while Delhi has none of it.

The manifesto also highlights the history of the struggle for full statehood.

It accused the BJP and the Congress of avoiding the question of full statehood for Delhi.

Both the parties' reason, the manifesto said, was that they do not have their government in Delhi.

The truth is that there have been opportunities when they had their government both at the centre and Delhi Assembly, it said.

"Even today, the stance of BJP and Congress has not been favourable towards granting full statehood to Delhi," the manifesto said.

Delhi goes to poll on May 12 and the results would be announced on May 23.