70 Trees Lopped Off, 170 More Could Face Axe For Road Widening Near Gandhi Ashram

Local people, among them several teachers and doctors, are agitating over the loss of tree cover and have formed a committee -- the Vriksh Bachao Samiti -- to protect the trees. 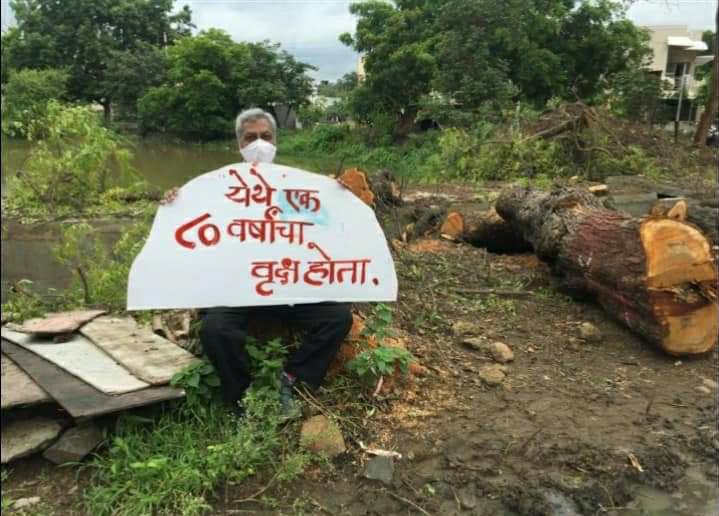 Over 70 trees have already been felled on the road leading to Sevagram in Wardha, Maharashtra -- the ashram that Gandhi made his home after the Salt Satyagraha of 1930. In a letter to the district collector, concerned citizens and residents of the area have asked that the 5-km stretch of road leading to the ashram not be widened. They have requested that any widening only occurs in the space that the trees will permit. About 170 more trees could face the axe.

Local people, among them several teachers and doctors, agitated over the loss of tree cover, have formed a committee -- the Vriksh Bachao Samiti -- to protect the trees. On the eve of Independence Day this year, the committee, in a letter to the district collector, appealed against the felling of more trees. It asked that those already felled be replanted. On Independence Day, a large group gathered and protested the felling of trees.

The road-widening is occurring in the mid-section of Wardha, very close to schools, colleges and residential areas. Widening this stretch would make for speedier traffic and increase the possibility of accidents, the committee said, appealing that the road widening plan be abandoned in public interest.

Several of the trees are over 50 years old, and may well have been planted at the time when Gandhi came to live in the area. The letter explains that local people were not consulted about the plan to widen the road or fell the trees. No assessment of the impact of the tree-felling was shared with them.

“We completely reject the model of development that is not inclusive of the ecological significance of trees and the close association between plants and humans,” the letter states. “This road should reflect simplicity, minimalism and sustainability – the very essence by which the world has come to recognise and value Gandhi.” The letter writers say the road should stand as a confluence of heritage, sustainability and modernism.

The committee said any construction work should be done with care for the roots of the trees. “The current construction activities include denuding the trees not only from one side but three sides. Moreover, these activities have been done within one metre of the tree trunk. This is likely to have resulted in 80-90 per cent destruction of the critical root mass of these trees. Even if not cut, the injuries sustained during digging and compaction would result in future mass mortality of the trees. To avoid this, digging by humans has to be undertaken instead of digging by machines. Moreover, exposed root mass of the trees has to be restored with soil and organic matter, without any soil compaction, in the two days following construction activity. All the 70+ trees that were cut should be immediately replaced by planting new trees.” Since this is the time of the monsoon, it would be ideal to plant the new one- or two-year-old saplings now, the letter suggests.

After the Salt Satyagraha from Sabarmati in Gujarat, Gandhi had decided not to return to the Sabarmati Ashram until India gained independence. He was imprisoned for two years afterwards, and travelled for a while after his release. In 1934, on the invitation of Jamnalal Bajaj, Gandhi arrived in Wardha and lived at a village called Sheogaon, about 7 km from Wardha city and 75 km from Nagpur.

With Gandhi’s presence, others too flocked to the area and soon it became another Gandhi Ashram, which was renamed Sewagram or ‘village of service’. The ashram website explains that there was another village called Sheogaon not far, and many of the letters addressed to Gandhi would find their way there; to avoid confusion, this area was renamed.

In 2018, as the state set about a tree plantation drive, saplings from a peepal tree originally planted outside Bapu Kuti by Gandhi were taken to be planted in over 200 other locations in the state where martyrs are commemorated.

Shuchi Sinha, a member of the committee that is protesting the tree felling, said, “We are doing all we can to protect these trees. Residents of this area have sentiments attached to them.”

District collector Vivek Bhimanwar said, “Seventy trees have been cut and we are seeing whether a change in alignment can save the other 170 trees. The appeal from the committee is under consideration.”