The double-decker Uttar Pradesh roadways bus was going to New Delhi from Lucknow. 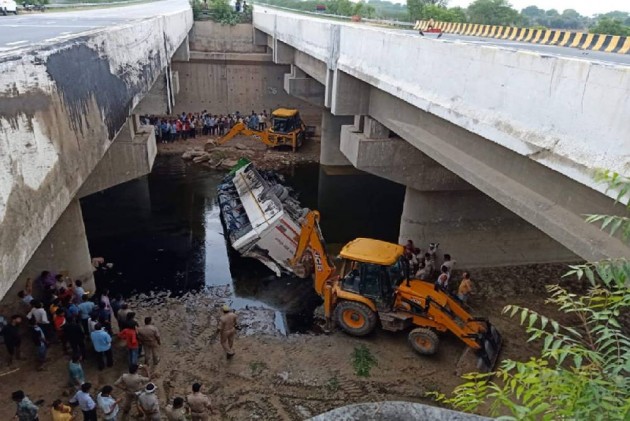 Twenty-nine people were killed and 18 injured after a bus skidded off the Yamuna Expressway and fell from a bridge in Uttar Pradesh on Monday, police said.

The bus was going from Lucknow to Delhi and had at least 50 passengers on board, they said.

"One sleeper coach passenger bus travelling from Lucknow to Delhi met with an accident on Yamuna Expressway (sic)," the Uttar Pradesh Police said on Twitter.

Officials said the bus fell into a large drain near Etmadpur and gushing water was making it difficult to conduct rescue operations.

"DGP UP OP Singh has directed to carry out relief & rescue work in full swing and is supervising it personally. All senior officers present at the spot (sic)," the state police said on Twitter.

Prime Minister Narendra Modi condoled the death of 29 passengers in a road accident in Uttar Pradesh.

"Pained by the bus accident in Agra, Uttar Pradesh. Condolences to the families who have lost their loved ones. I pray that those injured recover fast. The state government and local administration are providing all possible assistance to the affected," Modi said on Twitter.

"I express my deepest condolences to the families of those who died in the accident. I wish for the speedy recovery of the injured," he said.