The visitors lost the advantage of the toss as they struggled to come to terms with the pace of greenhorn Jerome Taylor (5-50) on a lively Sabina Park track to be shot out for 200. 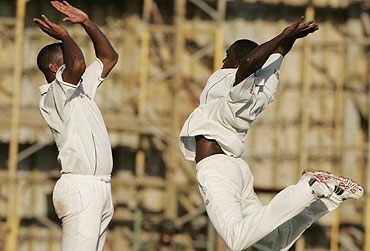 India blew away their chance to take control of the fourth and decisive Test against the West Indies with an inept batting display to be bowled out for a paltry 200 on the opening day on Friday.

The Indians, looking for their first series win in the Caribbean in 35 years, frittered away the advantage of the toss as they struggled to cope with the bounce of the Sabina Park pitch.

Only Rahul Dravid showed the craft and application needed to survive the early moisture of a track that was expected to keep low and turn as the match progressed.

The captain stood tall among the ruins with a patient 81 that consumed 215 balls spread and rescued his side from a disastrous 91 for six at one stage.

Lending valuable support to Dravid in the recovery act was fellow Bangalorean Anil Kumble who added 93 runs with his skipper for the seventh wicket. 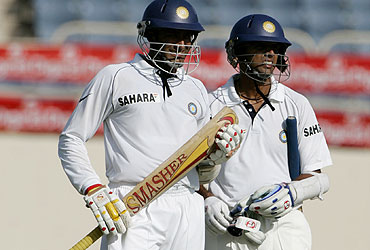 Kumble's 45 was the second highest score of the innings in which only three other batsmen touched double figures and none crossed 20.

Twenty-two-year-old Jerome Taylor, who troubled the visitors in the third Test, kept them hopping with his lively pace.

The local lad, playing in only his 10th Test, picked his maiden fiver, a handsome 5-50.

India lost its openers by the fourth over and the first six batsmen by tea before the rescue act by the seventh wicket pair allowed them to recover their breath.

Dravid batted for five and three quarters of an hour and faced 215 balls, hitting 10 fours in his knock.

His most productive period was the post tea session when he added 46 runs to the 35 he made from four hours.

Kumble was excellent at the crease and it was a measure of his new-found confidence that he smashed no less than seven fours in his 45 from 101 balls.

He departed as he has so many times in this series, going back to a rising delivery and guiding it on to his stumps.

The initial breakthrough was the handiwork of Pedro Collins who made Virender Sehwag (0) flick one straight into the midriff of Ramnaresh Sarwan at forward short leg.

India were so hard done by the juicy wicket that by lunch it had scored only 29 runs from 29 overs, 13 of which were maiden!

The afternoon session, if anything, was worse as four wickets fell for the addition of only a few runs.

V.V.S. Laxman (18) departed in the very first over after lunch when he drove at a delivery from Dwayne Bravo and was caught in the gully region.

Yuvraj Singh (19) hit a few meaty blows including two successive fours off Bravo before he missed a straighter one from Taylor and was adjudged out leg before wicket.

Mohammad Kaif (13) had trouble in adjusting to the bounce and pace of the wicket and fended off a catch in the slip cordon after surviving two earlier chances in similar fashion.

It was a day when paceman Taylor reproduced the West Indian terror of past by claiming four wickets in a hostile spell of fast bowling.

Taylor first put Wasim Jaffer (1) through the wringer before taking him out with his eighth delivery. It was a delivery which was shaped in towards the batsmen but straightened to peg back the off-stump of the elegant opener.

Taylor reserved his best for the afternoon session.

Bowling with venom on a pitch where his fellow quicks struggled to get the ball above the knee roll, the Jamaican quick made Yuvraj double up to a toe-crusher.

Taylor reared one up to Kaif so alarmingly that the right-hander had no option but to balloon a catch in the slip cordon.

The young paceman rounded up the day by making Sreesanth (0) hop and play on to his stumps and then forcing an edge from Munaf Patel (0) into wicketkeeper Denesh Ramdin's gloves.

Corey Collymore (2-17) was not too distant a second in the bowling honours as he got rid of Mahendra Singh Dhoni (3) early and then produced his trademark away-swinger which sent Dravid packing in the final minutes of the game.

It appeared for a while that Dravid would make the most of his decision to bat first on a wicket full of moisture and consequent life to put his batsmen through hell.

Dravid's association with the admirable Kumble was the cornerstone of India's resistance after its batting came apart at the seams against the all-pace attack of the West Indies.