Sports 'India Have It In Them To Succeed'

'India Have It In Them To Succeed'

Venkat's recipe for India's success in Pool A and beyond: Forget New Zealand and approach as if nothing has happened. 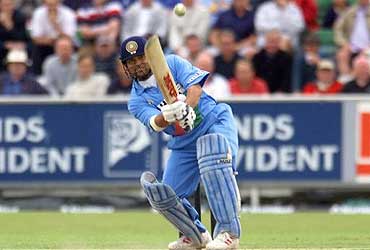 Oh, what a glorious year it was for Indian cricket in 1983. Before the tournament started, the odds were as low as 50 to one and 'Kapil's Devils' showed what metal they were made of. Indian cricket had come of age then as they beat the mighty West Indies, who were bidding for their third straight title.

It was possible for India to defend a small total mainly because of team effort and total determination as everyone put their weight together with the sole goal of winning the Cup. It has been 20 years since, and we did not have a crack at the crown after that.

If one looks at the grouping in the coming World Cup, India is clubbed with tournament favourites Australia, England, Pakistan and Zimbabwe. Teams like Netherlands, Namibia, Canada, Kenya and Bangladesh are also there amongst the 14 sides but they are there more for gaining experience and do not look to have the potential to challenge anyone.

It is interesting to note that India and Pakistan are grouped together for the first time in a  World Cup. It was a different format for the 1992 World Cup hosted by Australia and New Zealand, where each team played the other once. India defeated Pakistan by 43 runs.

The present grouping is tough mainly due to the presence of the defending champions. Australia has shown tremendous form and their reserve strength has also proved worthy. Midway through the tri-series, the services of Shane Warne, Glenn McGrath and Jason Gillespie were not available. The reserves specially Shane Watson and Michael Clarke, have come out with sterling performances.

On present form, Australia would be the hot favourites to reach the final, if not winning the Cup again. But one-day cricket being what it is, miracles do happen. It is not possible or advisable for any team to take any match easy, because on a given day any one of the lowly teams could upset the bigger ones. This has been proved in the past, albeit on sporadic occasions.

Australia have one of the best top order batting line-ups with Adam Gilchrist, Damien Martyn, Michael Bevan to name a few. If Gillespie, McGrath and Warne are fit and perform to their potential and their batsmen provide them the necessary defendable totals, the team from Down Under could match the West Indians in successfully defending the World Cup.

As for England, they have been playing well in recent times. Their record might not be all that striking but their confidence must be rather high after their Test win against Australia in Sydney.

The opening pair of Marcus Trescothick and Nick Knight seem to be formidable. Skipper Nasser Hussain, Alec Stewart and Paul Collingwood can also have a go at any bowling. They are capable of upsetting the apple cart of better teams on their day.

Zimbabwe has the uncanny ability to have the last laugh when they play at the highest level. They have in the past scored surprises over the Australians and the English and they always play to their potential. They are also one of the best in fielding.

Andy Flower is one of their key batsmen and the team, motivated well by Heath Streak, has the strength to beat the best of teams on their own soil.

I have stood in the middle officiating against all teams in Tests and in one-day games too. I have umpired many of Pakistan's matches. I must say that they have the talent in Tousif Zaman, Saleem Elahi and have couple of all-rounders in Abdur Razzaq and Azhar Mahmood.

Their record might not be as good as compared to other teams. But with Wasim Akram, Waqar Younis and Shoaib Akthar, Pakistan has an edge over others in the bowling department, even though their batting might be a suspect.

They depend very much on the experience of Inzamam-ul Haq, Yousuf Youhana and Saeed Anwar, who can take any attack on their given day. Their chance of making the Super Six is as good as any.

Coming to India, one can say that India has got the best batting -- which is absolutely true. With the likes of Sachin Tendulkar, Rahul Dravid, Saurav Ganguly and Virender Sehwag and the two young guns, Mohd Kaif and Yuvraj Singh in its ranks, India can boast of a batting order down till number seven.

It is good that Tendulkar had about 15 days rest. He is going to be ready for changing the complexion of the games. The think tank of the team should address themselves and give him the slot he wants in the batting order.

He has on many occasions expressed his desire to open the innings alongwith Ganguly. If your star batsman wants that, one has to approach with a positive mind and give him that. After all, he had opened the innings with Ganguly in over 100 matches.

It is heartening to see Javagal Srinath bowling at his best now. He has cut down the speed a bit but has improved his accuracy in great measure. With him as the spearhead and with the likes of Zaheer Khan, who has a long way ahead in one-day cricket, there will be no worry for India in its new ball attack.

As for Ajit Agarkar, he has always been an enigma. He is highly talented not only in bowling but also in batting and fielding. He will serve India for long. But he has to be consistent and if he puts his act together, we have a strong three pronged attack in fast bowling. Possibly with Harbhajan Singh or Anil Kumble, or both depending on the wicket on which we play, these bowlers can win matches for India.

Of late, Dravid has been asked to be behind the wickets in one-day games. I do not fully know whether in a tournament of this nature, it is the right decision as one mistake can cost the side a match. People generally feel that it is easy to keep wickets but it is not true.

My impression on Parthiv Patel is that he is impressive with his attitude and application. The manner in which he approaches shows a lot of gumption and determination. Indian fielding now seems to be adequate but we have to improve, first to qualfy for the Super Six and then to win the Cup. The coach has to give a lot of attention towards this and take necessary measures by talking to the players.

Mind you, we were able to win the 1983 Cup because of our fielding, mainly in collecting catches. At that time, we were considered one of the best fielding sides in the world. Some of the catches by Kaif and Yuvraj in New Zealand were below standard as compared to our performance in the ICC Mini World Cup in Colombo last September.

Most of the elder statesmen in the team like Srinath and Kumble find these things difficult. As long as Kumble or any bowler bowls 10 overs for about 35 runs, he has done his job. But the bowlers would get motivated if there are no fielding lapses.

Besides taking catches, we should be able to cut fours into twos and twos into a single. Inadequate or sub-standard fielding will cause a lot of problems and it is not going to be easy for us.

And, our bowlers should also apply themselves well and avoid bowling additional overs in lieu of no balls and wides. I am not happy with the selection of Dinesh Mongia. On bouncy wickets like the ones going to be available in South africa, we need batsmen of the calibre of V.V.S. Laxman, who is a better stayer at the wicket than Mongia. In my opinion, Laxman would have been the ideal choice.

I also fail to understand as to why Hemang Badani was not considered for this slot. Badani has done exceptionally well and he is an electrifying fielder. I feel Mongia has not proven himself enough to be in the squad. I also understand that only 15 players could go but it is a glaring omission.

Our players should approach the World Cup forgetting that we lost both the Tests and one-day series in New Zealand where it was proved that the pitches were difficult for the batsmen. Our aim should be to qualify for the Super Six. I am sure in my mind that we have the best of chances of progressing to the second stage along with Australia and Pakistan or England.

Zimbabwe is a dark horse in this group. I give better chances to India than Pakistan but they must leave behind the memory of New Zealand performance as if nothing has happened. Psychological preparation is most important. They have the talent and will be in South Africa early enough to get attuned to the big occasion.

Comparing Akram to Srinath, Younis to Zaheer and Shoaib to Ajit Agarkar, Pakistan are a better bowling side than India but in batting, we have the best combination in the world.

Winner of India's last group match against Pakistan on March 1 at Supersport Ground in Centurion might also turn out to be the team to get the berth in the Super Six.