Warming Sino-Indian relationship tells the US that India is not an unconditional ally. The US may be better off viewing India as an ally like France—one which shares many values with Americans, but pursues its own course. 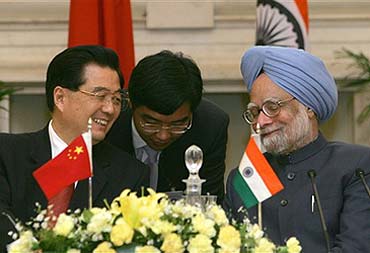 Diplomats and analysts will be watching closely as Chinese President Hu Jintao visits India this week, the first by a Chinese head of state to India in a decade. Few capitals have as much interest in the outcome as Washington. However, those in the US who see India simply as a hedge against China will likely be disappointed—for the two Asian giants have also taken giant strides toward better ties. The US may be better off viewing India as an ally like France—one which shares many values with Americans, but pursues its own course.

This week’s India visit will be a reminder of an important fact to those who focus exclusively on the US-India relationship as an alliance of democracies with shared values and ever closer economic and cultural ties: India and China are enjoying a honeymoon of their own. Long forgotten are the lows of 1998, when then Indian Defense Minister George Fernandes famously called China the country’s "number one threat" and accused it of encircling India with its missiles, navy, and allies Pakistan and Myanmar. For its part, China has modulated its position on Kashmir. Ongoing border talks have led to Chinese recognition of the Himalayan state of Sikkim, absorbed into India in 1975, as part of India—although differences continue on Arunachal Pradesh, an Indian state which China claims. But overall the language describing this relationship has taken a 180-degree turn. After Chinese Premier Wen Jiabao’s 2005 visit to India, the two countries heralded a "strategic and cooperative partnership."

Underscoring this change is a new robustness in economic ties. As recently as 2001, two-way trade between India and China was a paltry $3.6 billion, but it nearly doubled in 2004, rising 79 percent from the previous year to $13.6 billion dollars. By 2005 the figure reached $18.7 billion, and is expected to top $20 billion in 2006. The India-China Joint Study Group of Comprehensive Trade and Economic Cooperation predicts enormous growth potential because each country’s respective share of the other’s imports is still so small—both under 5%. And both countries anticipate growth in services trade, the sector in which their bilateral trade has grown faster than the sector has in each country. While some Indian commentators raise concerns about Chinese economic influence--underscored by the recent disqualification of Chinese firms from a mobile tender—this remains a mere blip overridden by economic pragmatism. Today’s talks, for example, between Hu Jintao and Indian Prime Minister Manmohan Singh produced a commitment to double trade from current levels to $40 billion by 2010.

In the past year, India and China have forged a new alliance in the energy sector—one in which both India and China require security for exponentially growing domestic demands. Onetime rivals for control of fields in Angola, Nigeria, Kazakhstan, and Ecuador, India and China agreed in January 2006 to cooperate on overseas acquisitions. The agreement grew out of their co-ownership of a Sudanese field and their cooperative bid for fields in Syria. These joint pursuits are knitting together the interests of Asian state-owned oil and gas behemoths ONGC in India, and CNPC and CNOOC in China. With the rapid growth of these economic ties in areas critical to both countries’ development, the India-China relationship has set off on a completely new path. It is this new course that the US, concerned about a worldwide scramble for energy resources, would be watching carefully.

At the same time, India and the US are drawing unmistakably closer - from joint military exercises to an American passion for yoga. A US that once sanctioned India for its nuclear tests now proposes close cooperation on civil nuclear energy. An India that famously evicted Coca-Cola and IBM in the 1970s has become a magnet for companies like GE and Microsoft.

This growing Indo-US warmth marks a complete reversal of past decades. Nominally nonaligned India had a quasi-alliance relationship with the Soviet Union. The US, of course, found a compliant partner against Soviet Communism in Pakistan. India and the US clashed on matters ranging from nonproliferation to human rights to the Nixon administration’s tilt toward Pakistan during the 1971 Bangladesh war. With India’s economy among the most autarkic in Asia, the economic relationship was equally frigid.

However, following India’s nuclear tests in 1998, US President Bill Clinton moved to craft a closer US-India relationship, highlighted by a successful presidential visit in 2000. The Bush administration has taken the relationship further. The president’s fascination with the scale and diversity of India’s democracy is well known. A willingness to rethink international treaties—including those relating to nonproliferation—has also helped clear the way for unprecedented cooperation. India’s opening of its economy has reinforced these trends. The scorching growth of India’s software and IT-enabled services sector has given it a significant role in global business. From a $150 million industry in the early 1990s, the sector now stands to exceed $36 billion in revenues in 2006, two-thirds from exports. India’s knowledge work has linked the country to American business in vital ways. In 2006 it became the fastest growing mobile phone market in the world, and its automobile sector is one of the fastest growing, too.

Perhaps the driving force in the new US-India relationship has been a shift in the perception of China in Washington, its metamorphosis from a strategic partner to a strategic rival. Not surprisingly, the new Indo-US strategic partnership, in particular the civil nuclear deal, has energized debate in the United States about what the nation will "get" in return.

The question becomes more acute when seen against the blossoming China-India economic relationship emerging over the last five years. Of course, a strong trade relationship may not indicate full agreement on security issues—the US-China relationship an apt example—but the great changes taking place within Asia as its two largest powers grow faster, and come closer together, mean that nothing can be assumed. And India’s historic wariness of US foreign policy and deep differences on Pakistan remain. Indeed, the fact that even in a phase of warming ties, the US still cannot satisfy Indian goals on Pakistan keeps at least one major roadblock in place. India-China cooperation on energy security points to others: their joint bid for Syrian fields, for example, was not welcomed in Washington. But most importantly, the emergence of a cooperative aspect to a once purely competitive relationship between the two Asian giants creates new incentives for India. So as India and the US overcome years of estrangement to craft a strategic partnership, it’s worth asking what that partnership will really look like. At the moment a deep alliance, with an extensive convergence of security interests similar to US ties with Japan and South Korea, appears unlikely.

In the context of the many rapid changes taking place in Asia, Americans should step back to recognize that a good US-India relationship will not be one where India complies with every US policy goal. Rather, the tango between Washington and New Delhi will resemble that of another problematic ally, France, a relationship of robust cooperation marked by disagreements and ideological bickering. Understanding, and planning for this kind of relationship will create expectations that can be met successfully.

Alyssa Ayres is deputy director of the Center for the Advanced Study of India at the University of Pennsylvania and managing editor of the journal India Review. She will be an International Affairs Fellow of the Council on Foreign Relations in 2007. Rights: (c) 2006 Yale Center for the Study of Globalization. YaleGlobal Online