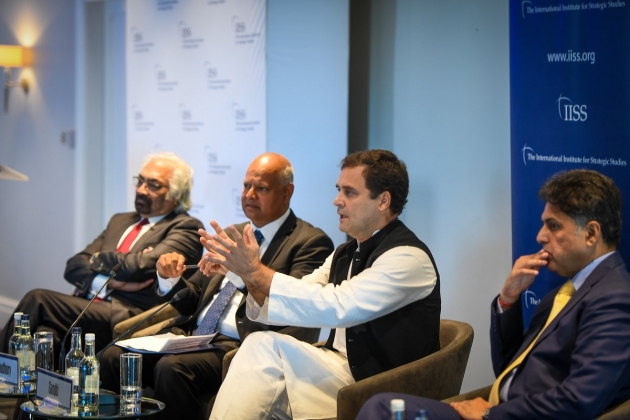 Coming down heavily on Narendra Modi, Congress president Rahul Gandhi on Friday said the Doklam standoff with China was not an "isolated issue" but part of a "sequence of events" and if the prime minister was carefully watching the process, India could have stopped it.  He also claimed that the "truth is the Chinese are still in Doklam today".

Addressing the International Institute of Strategic Studiesi n London, Gandhi said "the prime minister is episodic. He views Doklam as an event".

"Doklam is not an isolated issue. It was a part of a sequence of events, it was a process.

"If he (PM Modi) was carefully watching the process, he could've stopped it," Gandhi said at the London-based think-tank.

Doklam is not an isolated issue. It was a part of a sequence of events, it was a process. Prime Minister is episodic. He views Doklam as an event. If he was carefully watching the process, he could've stopped it: Congress President @RahulGandhi #RahulGandhiInLondon pic.twitter.com/aJDJIri9u7

Minister of state for external affairs VK Singh told Rajya Sabha last month that there have been no new developments at the site of the face-off with China in Doklam and its vicinity, and status quo prevails in the area.

"Since the disengagement of Indian and Chinese border personnel in the Doklam area on August 28, 2017, there have been no new developments at the face-off site and its vicinity. The status quo prevails in this area," Singh had said.

Tensions between India and China reached their peak during a 73-day standoff in Doklam near Bhutan over Beijing's construction of a road in the area.

The standoff ended after both sides agreed to disengage, and there have been no confirmed or official reports of China resuming any activities since then.

Speaking on India-Pakistan relations,  Gandhi said Modi doesn't have 'a "deeply thought-out strategy" on Islamabad, but acknowledged that it was "very difficult" to converse with the neighbouring country as there is no single institution there that holds supremacy.

Gandhi talked about Indo-Pak ties which nosedived following a spate of terror attacks on Indian military bases by Pakistan-based terror groups since January 2016.

India has made it clear that it will not hold dialogue with Pakistan as terrorism and talks cannot go hand-in-hand.

Gandhi said "there is no deeply thought-out strategy by Prime Minister Modi when it comes to Pakistan". He also said that it was very difficult to deal with Pakistan.

Pakistan's powerful military has ruled the country for nearly half of its history since independence in 1947.

Gandhi said: "It's very difficult to converse with Pakistan because there is no one institution that holds supremacy".

"So we wait until they come to form a cohesive structure," he said at the London-based think-tank, apparently referring to the new government in Pakistan led by Prime Minister Imran Khan.

In a letter to Khan on August 18, the day he was sworn in as Pakistan's 22nd prime minister, Modi expressed India's resolve to build good neighbourly relations between the two countries.

On July 30, Modi telephoned Khan to congratulate him on his Pakistan Tehreek-e-Insaaf party's victory in the general elections and expressed hope that both countries will work to open a new chapter in bilateral ties.