'In Free India I Was Denied Entry'

'I have travelled to Iran, Pakistan... I have been to Syria, Lebanon, Egypt but I never faced any problems there. So, how can I accept this decision?' asks the American journalist who was deported on arrival on Sept 23. 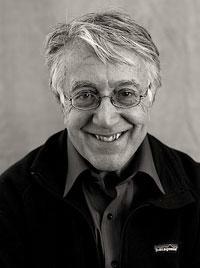 David Barsamian is an Armenian-American radio broadcaster, writer, and the founder and director of Alternative Radio— the Boulder, Colorado-based syndicated weekly talk program heard on some 125 radio stations in various countries. He was deported on arrival from the Indira Gandhi International Airport on September 23/24, i.e he was denied entry into India and was put on a return flight to the US. The authorities said the action was taken because he had been misusing his tourist visa. Mr Barsamian is a regular visitor to India, speaks fluent Hindustani, and has also been learning music from Delhi-based sitar maestro Pandit Debu Chaudhuri. Mr Barsamian has done several radio programmes criticising India's position on Kashmir and has commented on the Maoist movement in central India. He is also a fierce critic of US foreign policy and is best known for his series of interviews with Noam Chomsky, which have been published in book form and translated into many languages. According to Khurram Parvez, coordinator of Association of Parents of Disappeared Persons (APDP), Mr Barsamian was scheduled to travel to Srinagar this week to report on over 2000 unmarked graves found in north Kashmir recently. After being deported, he gave his first interview to Rajesh Joshi of the BBC Hindi service. Excerpts:

What were the circumstances under which you were denied entry into India?

I landed at the Indira Gandhi International Airport, Delhi, on Friday morning at 12:30 by Lufthansa flight from Frankfurt and I went to the immigration counter, handed my passport to the officer. He said " wait here" and went away. After coming back, he kept looking at the computer screen and my passport. Then he went away again and came back with other officers and asked me to accompany them. That is when I got worried and anxious. They put me in a room with a couch and a chair. Ten minutes went by, fifteen minutes went by, I kept getting up every once in a while and said what's going on? Kya ho raha hai? I spoke to them in Hindi and then one of them casually said you may have to go back on the same plane by which you came. I said what? What's going on here? Can I get an explanation? I had to go to the bathroom and one officer accompanied me. There were five or six officers standing outside the room I was being held in. They were not rude or anything. One of them told me: 'You have been denied entry into India. You are on the banned list and you may not enter the country'. They waived a piece of paper at me: ‘This American citizen can't enter India and he is on the banned list’. I was then taken from that room and had to walk all the way back to the gate where they photographed my passport and put me on the plane. It was a very Kafkaesque situation.

India is a democracy where people are free to express diverse opinions. There must be some reason why action was taken against you?

This is a political decision because in the view of the government I am a dangerous man. Maybe because I speak a lot about Kashmir and I have done programmes on Kashmir, Jharkhand and Chattisgarh. I have reported the revolutions that are happening in India for the people of America. I think this arbitrary action by the government of India in preventing me from entering the country is not a sign of strength of Indian democracy; it's rather a sign of weakness. A healthy, vibrant democracy should include a rainbow of different opinions, different perspectives, different points of view and it should happily embrace those kind of differences rather than seeking to impose a uniformity of thought and opinion. I remember a prominent journalist in Kashmir telling me in February — I am not going to give his name for obvious reasons because there is worry that something will happen to him — that India is in a precarious situation in Kashmir and elsewhere and that democracy is being eroded with more and more restrictions and prohibitions and the like. So, it's a sign of weakness and not a sign of strength. In the scale of things, I am an independent journalist based in Colorado; I am not a very important figure and they are spending this amount of time and energy on me. I think that's very revealing.

But the authorities say you misused your visa.

I was in India but nobody said anything to me. I was there six months ago in February. I am angry that the government of India didn't inform me that if you want to come to India, you get your visa changed. I have lost a lot of money and my work has suffered. I am deeply pained. Every week, I do one-hour special interviews on current affairs, on topics like free trade, the tea-party movement etc. I have won awards as well. The interesting thing is that I have travelled to Iran, Pakistan but in free India I was denied entry. I have been to Syria, Lebanon, Egypt but I never faced any problems there. So, how can I accept this decision? There are a lot of problems with this democracy as there are in the US. This is not a 100 per cent free democracy. This is a weakness of any government if it puts ban on freedom of movement.

Do you think as an American tourist it was proper on your part to comment on political issues?

[Speak, for your lips are free;
Speak, your tongue is still your own..
Speak, for truth is living yet --]

What are your thoughts about today's India?

India is facing a lot of revolutions. Some people want to separate from India. Others want to change the government. A lot of atrocities are happening. Especially what is happening in Kashmir is not good. Many people have been killed at the hand of government, many have disappeared. People are dying. We support freedom. People want to know what's happening in the largest democracy of the world. But it —that India is the world's largest democracy— has become a sort of advertisement to show off to the tourists.

On the other hand India is also being praised everywhere including by your president Barack Obama?

Yes, indeed. What's the reason? Obama went to India last year and he sold military hardware to India. He wants to make an alliance with India against China. This is his long term conspiracy. Obama has no idea what's happening in Chattisgarh, Jharkhand and the northeast. He has no idea.

Do you support those movements?

Yeh kahna meri auqaat naheen hai. (It's not my station to say it) I just observe these movements and report on them. If they want to change their circumstances, it's their right. Who am I to advice them?

Given a chance, would you like to come to India again?

Aur kya (What else?) I love India. I have a very close relationship with its culture, its music. I have friends there. My guruji is there. I am feeling restless thinking what would happen if can't go there.