The recently broadcast NBC footage taken by an American journalist embedded with a Marines unit attacking Falluja was unambiguous. 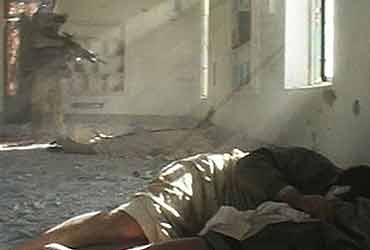 The recently broadcast NBC footage taken by an American journalist embedded with a Marines unit attacking Falluja was unambiguous. In a badly damaged mosque, a US soldier has indeed shot dead from a close range, execution-style, an injured person who, according to the journalist himself, was severely injured, unarmed and did not pose any imminent threat. In fact, several other Iraqis were reportedly found in Falluja with single-bullet marks in their heads indicating a similar fate. It can be accurately concluded that US soldiers are still committing war crimes in Iraq with frightening ease and nauseating impunity.

Coming after the disclosure that more than 100,000 Iraqis have been killed as a result of the US war on Iraq, the Abu Ghraib torture case, the wedding massacre -- in which 40 civilians, including 10 children, were killed in cold blood, as confirmed by an Associated Press Television News film -- and the onslaught of consistent, documented evidence of indiscriminate bombing of civilian neighborhoods by US forces, this new revelation should necessitate an investigation into the reported war crimes of the occupation forces by a UN-appointed committee with the intention of presenting the findings before the International Criminal Court (ICC).

Despite the fact that the US does not recognize the jurisdiction of the ICC, such an investigation may still present a crucial, indispensable forum that can exert moral and political pressure on the US and its occupation allies to better respect international law and the rules of war stipulated in it. The US armed forces cannot be trusted to conduct a proper investigation on their own. Their impressive record of lies, misinformation and cover-ups should amply explain why.

Even in the age of empire, the rest of the world should still be able to draw some red lines for Washington, impressing upon the US government that some crimes ought to be categorically banned. An American insistence on monopolizing the use of arbitrary and overwhelming force with no consideration whatsoever to international law or the UN principles will be viewed by people around the globe as the ultimate proof that the US has actually become a pariah state, putting itself above, if not altogether outside, the law. This has the potential of triggering unprecedented lawlessness and terror across the globe with no universally accepted restraints to hold either in check.

Leading American neoconservative ideologue Robert Kagan's illustrious depiction of a "Hobbesian world where international laws and rules are unreliable and where true security and the defense and promotion of a liberal order still depend on the possession and use of military might" may well turn into a self-fulfilling prophecy. A new world war of completely new parameters, rules and weapons is in the making and nothing can stop it or derail it until the US is first held accountable before international law.

The majority of humanity, including most Americans, have a lot to lose from the outbreak of such an anarchic, take-no-prisoners type of war. When no moral principles or legal tenets apply, anything goes to justify or rationalize heinous crimes against defenceless civilians. Racism and counter-racism, hate, xenophobia and utter callousness may prevail as a result, causing the rift between nations to widen and making peaceful reconciliation -- based on freedom, justice, democracy and the rule of law -- ever more unattainable. A human jungle will emerge, making beast jungles look civil in comparison.

We do not need to wait for this to happen. People of conscience around the world, opposed to all forms of terror and racism, can still take the initiative. The UN is far from ideal, but it is all we have for now to counter this fatal race into the abyss. The UN General Assembly ought to be convened under emergency regulations to debate this new imperial era and take the appropriate measures to respond to it.

Moving the UN headquarters out of US territory, for instance, may be one of the ideas that ought to be discussed. It may be derided by the neocons in Washington as a welcome confirmation of the supposed "natural" split between the US and the world; it may invite harsh retaliatory measures by the US against the architects of such a move, but it is a moral imperative that may help bring the US to its senses by attaching a real and dear price to its violations of international law.

At the very least it will stir vibrant debates in American civil society, further encouraging it to take action and reclaim its nation from the conservatives and fundamentalists who have taken control over it. The European Union, clearly, is best suited to take the initiative in this regard. It remains the US's last official ally, its partner in the conceptual "west," and a major economic competitor as well. It can count on the support of an overwhelming majority of nations that are tired of the US police baton, its economic blood-sucking hegemony and its imperial hubris.

Nations may decide to take their own legal and political measures to amplify the response, such as banning the importation of US weapons, hazardous foods, tobacco and soft drinks, just for starters. That will certainly help drive the message through the thick walls of political insulation erected around America today.

It is Iraq and Palestine today. Who knows who could be next tomorrow?

Omar Barghouti is an independent political analyst based in Palestine.