We heard about 'decompression' and other such absurdities but no coherent advocacy of the rule of law, the necessity of imposing the writ of the state, or of protecting the lives, properties and freedom of movement of the common people, found any mea 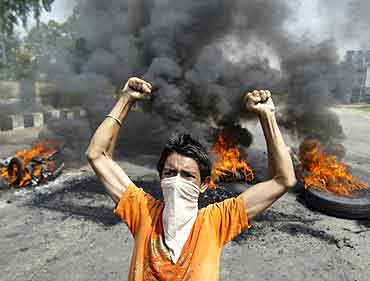 Administrative incompetence in India manifests and articulates itself in some of the most imaginative guises, and the meltdown in Jammu & Kashmir (J&K) over the past weeks, unsurprisingly, produced some disingenuous formulations. The most creative among these was a theory of ‘decompression’ enunciated by a senior state police officer, which asserted that the best way to deal with the rising tensions in both the valley and in Jammu was simply to withdraw forces and allow often-violent demonstrators free run of the state’s capital cities (Srinagar is the summer, and Jammu the winter capital of J&K). It was this ‘idiot philosophy’ of administration that resulted in sectarian and separatist mobs simply and repeatedly taking over both towns, even as the security forces (SFs) withdrew under specific orders not to confront or obstruct the crowds. As a result, separatist mobilisation produced two ‘mass rallies’ on August 18 and 22, 2008, in Srinagar, gathering crowds estimated at about 125,000 and 250,000, respectively. This mobilisation was mirrored by communal mobilisation over the Amarnath land allocation controversy by Hindu right wing organisations in Jammu. 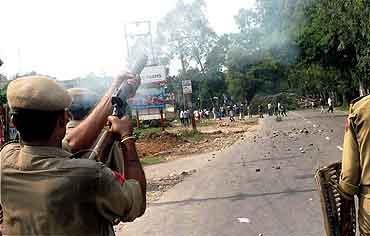 Another ‘stream of thought’ -- enunciated in two diametrically opposite perspectives -- also found sympathetic audiences at the highest echelons of power, both in the state and at the centre. In one formulation, the breakdown in Jammu was a ‘mere law and order problem’, while events in the valley reflected a ‘political problem’. Jammu was, consequently, to be ‘tackled’ through stern police action, while a ‘military’ or ‘police’ response in Kashmir would be entirely counter-productive, and the state’s agencies could profit most through conciliation of and negotiation with separatists in the valley. Conversely, in the opinion of other resident sages, the ‘street rage’ in Jammu was rooted in a long history of injury and neglect, and needed to be ‘handled sensitively’, but the separatist excesses in the valley deserved no leniency, and were to be abruptly suppressed through the use of all means necessary. While both theses were advanced by officials of impeccable ‘secular’ credentials, there are no prizes for guessing the religious identity of the respective backers of each proposal.

It is significant that no coherent advocacy of the rule of law, the necessity of imposing the writ of the state, or of protecting the lives, properties and freedom of movement of the common people, found any meaningful space in the frenetic policy discourse over weeks of crisis.

What is astonishing is that such gratuitous nonsense was not only given a hearing, it produced abject state paralysis in both Srinagar and Jammu, as well as at the centre, despite grave anxieties expressed by intelligence agencies and central security forces. It is significant that these ideas found currency within the context of a collapse of confidence that had followed the August 11 secessionist march to the Line of Control (LoC) in which severely inadequate force deployment had resulted in "murderous street clashes between Police and protestors" which claimed some 20 lives.

In any event, the government, both at the centre and in the state, celebrated the fact that the demonstrations by separatist elements at Srinagar on August 18 and 22, as also the total bandh (shutdown) they imposed in the intervening days, "passed off peacefully". It was, of course, of trivial importance that separatist mobs had taken over the heart of Srinagar town for days at end; their leaders had delivered incendiary speeches; and slogans of ‘Pakistan Zindabad’ (Long Live Pakistan) and ‘Bharat teri maut aayi, Lashkar aayi, Lashkar aayi’ (India, your death has come, the Lashkar has come, the Lashkar has come), among others, were raised.

On the same days, Jammu town was handed over to another rabble demanding restoration of the allocation of land to the Amarnath Shrine Board, which took to the streets and engaged in several acts of vandalism. Once again, the police and security forces had been ordered out of the affected areas in order to ‘avoid confrontation’.

But if peace is to be secured by simply withdrawing the state’s security presence from all areas of possible confrontation and conflict, then it will not be long before the Indian state vacates its entire jurisdiction and lapses into the territorial extent of what was evocatively described in the terminal stages of the Mughal era: Sultanat-e-Shah Alam/ Az Dilli ta Palam [The Empire of Shah Alam (extends) from Delhi to Palam].

In the turbulent days of protests preceding the August 18 ‘mass rally’, security officers who had done their duty had been summarily transferred out, humiliated, and, in at least one case, denied rightful and hard-earned Independence Day honours. Areas of the old town in Srinagar, which had been hotbeds of terrorism in the 1990s, and had been recovered at great sacrifice by the security forces, had once again been abandoned, without contest, to the extremists. Worse, demonstrators dispersing from the mass rallies pelted stones on Central Reserve Police Force (CRPF) personnel in the old city, forcing the troopers -- under strict orders not to fire at the crowds -- to withdraw, and then proceeded to smash their bunkers. One report spoke of, "groups of phenomenally emboldened secessionists dismantling hundreds of CRPF bunkers in the capital city." In all, state authority visibly crumbled across both the valley and Jammu, even as evidence of direct Pakistani interference in the current troubles mounted, and repeated violations of the ceasefire along the LoC were registered. 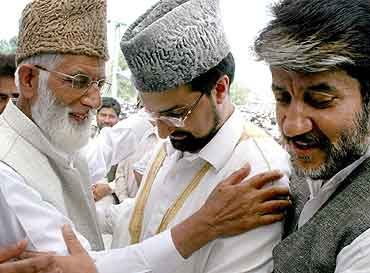 At the time of writing, however, the state administration -- on apparent instructions from a hitherto palsied centre -- is beginning to display some incipient evidence of a spine. The separatists, led by the Tehreek-e-Hurriyat’s Syed Ali Shah Geelani and the All Party Hurriyat Conference’s (APHC) Mirwaiz Umer Farooq, had announced another three-day bandh after the August 22 ‘mass rally’, to be followed by another mass rally, at Lal Chowk, on August 25. In the night of August 23, however, a curfew was announced, and orders were passed out to the SFs to arrest second-rung secessionist leaders (the principal mobilisers), and to block off the movement of protestors from rural Kashmir into Srinagar. Geelani and Farooq were also arrested on the morning of the 25th, hours before the announced 'mass rally'. Initial reports suggest that the Lal Chowk area has been effectively ‘sealed’, and the possibility of a significant gathering remains remote, though a handful of minor incidents had been reported from different locations in the valley at the time of writing.

At the same time, action has also been initiated against communal leaders responsible for violence in Jammu, and several prominent agitationists have been arrested under the Public Safety Act.

Negotiations with saner elements on both sides have, moreover, reportedly produced the outlines of a settlement of the Amarnath Shrine Board dispute, with a draft agreement providing for a restoration of the disputed land to the Board, explicitly for temporary use during the period of the annual yatra (pilgrimage), and with provisions for the reconstitution of the Board with members drawn from both Hindu and Muslim state subjects. 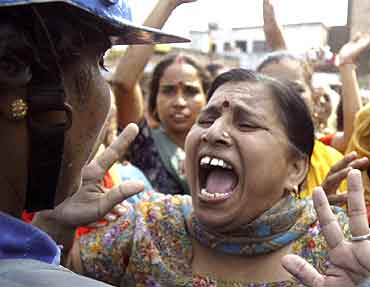 The agitation in the valley, however, has left the Amarnath land controversy far behind. While utterly cynical falsification of the issue had helped spark the initial demonstrations in Kashmir, it is now the case that these have now taken a momentum and direction entirely unrelated to the apparent proximate provocation, and have dovetailed perfectly into the wider objectives of mass separatist mobilisation -- objectives that have been vigorously, though unsuccessfully, pursued over the past two years by Pakistan-backed overground organisations in the state.

Administrative decisions over the past weeks have resulted in tremendous demoralisation among SFs in J&K, and a loss of confidence in the state’s police and administrative leadership. They have also resulted in the destruction of specific capacities -- large numbers of bunkers and police posts -- and of SF dominance in traditionally ‘difficult’ areas, all of which will require a tremendous effort of restoration. More significantly, the days of anarchy have demonstrated extraordinary vulnerabilities of the Indian state and have not only "phenomenally emboldened" the secessionists, but brought about an abrupt -- albeit tenuous -- unity of purpose across historically fractious formations.

The belated state response will, of course, result in some semblance of immediate order, but the subversive impulse that has found new momentum in Kashmir will not easily disappear, and separatist elements will continue with intensifying efforts to capitalise on the developments of the past weeks through new alignments and new initiatives. Any sign of infirmity in the Indian state will even further encourage such developments, and while excess of force will have its own adverse consequences, any hesitation in the use of judicious force will be calamitous.

The state in India has, for far too long, privileged violent dissent at the expense of the constitutional and democratic constituencies. This, precisely, has not only infinitely widened the separatist spaces in J&K, it has also made moderate and secular politics nigh impossible, forcing ideologically nationalist and secular political formations to adopt increasingly radical platforms, merely in order to be heard, or to secure a meaningful presence in their interface with government and with the people. The environment of exceptionalism and impunity that has long strengthened subversion, extremism and terrorism in J&K must be brought to an end, and democratic politics be restored to its primacy in the state. To this end, any argument advocating delays in the holding of state assembly elections must be brusquely rejected. India has held elections in circumstances infinitely worse than what currently prevails in J&K. The state must rebuild confidence in its instrumentalities and restore an elected government to power in the state at the earliest.