Braving five pit stops at Hockenheim, the Jordan driver brings up the car to the finish line at the 16th position. Updates 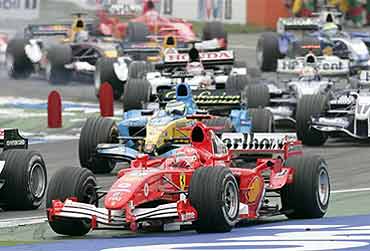 A smiles returned on Narain Karthikeyan's lips as he mastered a technically demanding circuit but McLaren's Kimi Raikkonen was left a shattered man after another machine failure ruined his chances of victory at the German Grand Prix.

Raikkonen put up a dominating display as he led from the start and looked set to narrow the gap between himself and championship leader Fernando Alonso.

But the race ended in tragedy when his car suddenly stopped in the track in the 36th lap, paving the way for another Renault win.

It was sixth win of the year for Spaniard Alonso who now has a 36-point advantage over Raikkonen, with a tally of 87 points against his rival's 51, with seven more races remaining in the calendar.

Raikkonen had suffered a similar fate at the European Grand Prix in May where his front tyre suspension gave away in the final lap when he was leading Alonso to the finish.

McLaren, however, had something to cheer with Juan Pablo Montoya taking the second place on the podium.

Jenson Button in BAR-Honda was third and Alonso's teammate Giancarlo Fisichella was fourth.

The disappointment of the day might have been Ferrari. Defending champion Michael Schumacher moved from fifth place to third at the start but his car clearly struggled to keep pace with the leading teams and eventually dropped back to his original fifth place.

India's Karthikeyan, driving his Jordan car, finished 16th ahead of his teammate Tiago Montiero of Portugal.

Bringing up the car to the finish line itself was an achievement for Narain whose debut season has been plagued by electrical and mechanical failures. That he had to pit five times did not matter for the 28-year old from Chennai.

"I had an eventful Grand Prix race with five pit stops but thought I would not make it to the end with my tyres," commented the Indian before leaving for race direction to justify a blue flag that he was waved at during the last part of the race.

On lap six, after starting in the 19th position, Narain was already running in the 14th position ahead of Monteiro after an incident between Jacques Villeneuve (Sauber Petronas) and Robert Doornbos (Minardi Cosworth).

Monteiro on the other hand learnt a lesson that he would not forget for the rest of his career.

The Jordan driver, keen to preserve his position Jacques Villeneuve, swung to his left and blocked the path of the former world champion just ahead a right hand corner.

But Monteiro closed the door too late and gave little time for the Canadian to react. Villeneuve rammed in from behind and both the cars went off the track.

The damage was more to Villeneuve as he lost his nose cone in the incident but Monteiro too was forced a visit to the garage, and as a result, lost his position to Narain.