'I Am Improving Every Day'

'Bad phases come in every player's career. I have worked hard on my wicket-keeping and hopefully, it will be a better period for me now' 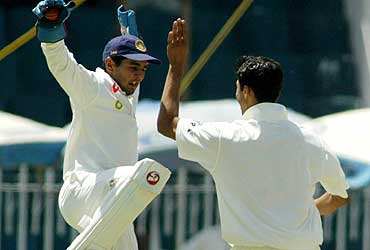 Parthiv Patel, one of the youngest players to don the wicketkeeper's gloves in world cricket, said the disappointing tour of Australia and the constant scrutiny by critics had strengthened his resolve to make himself a permanent member of the Indian team "by improving every day".

The baby-faced teenager said he had identified the flaws in his wicket-keeping during the Australian tour and had worked hard to rectify them.

"I have worked very hard on my keeping after the tour. I knew I was not up to the mark so I was determined to rectify all my problems. I still have a long way to go," the 19-year-old Patel said.

Patel's ordinary display behind the stumps had raised a question mark over his international career but the national selection committee, which includes two wicketkeepers who played for the country with distinction -- Syed Kirmani and Kiran More -- reposed faith on the youngster and persisted with him for the historic tour of Pakistan.

The youngster has not disappointed, having put up a much improved performance behind the stumps in the first two Tests in Multan and Lahore and also contributed with the bat by equalling his highest score of 62 in the Lahore Test which India lost by nine wickets.

With help from former wicketkeepers and video technology, Patel identified the flaws in his keeping and worked hard on rectifying them.

"I felt that maybe I was not watching the ball closely in Australia, and that I was probably getting up a little early. I got some inputs from Ian Healy, I am obviously in constant touch with Kiran More, and Kiri bhai too helped me out.

"After listening to them, I went and watched some videos of mine, and I found what they had identified was exactly what was wrong," he said.

"I thought there might be some extra bounce on the Australian wickets, so I was just trying to get up a fraction of a second early. But that was not helping, because the wickets weren't behaving the way I had anticipated."

Having smoothened the rough edges, Patel played in domestic cricket after returning from Australia. "I played a couple of one-dayers in Ahmedabad, and in the Duleep Trophy too. I did sense a difference in my keeping.

"I am more confident now. I kept well in the Duleep Trophy, and for a whole day in the practice match in Kolkata before we left for Pakistan."

With the Indians preferring to go with vice-captain Rahul Dravid as wicketkeeper in the one-dayers, Patel did not get to play in the five-match one-day series.

"It's a bit hard to just sit out. Nobody can improve his game unless he keeps playing. So it has been quite a difficult period from that point of view, a bit frustrating for me. But it was also good in one sense in that I got some time to work on my wicket-keeping and my batting."

Patel made his Test debut as a 17-year-old in Trent Bridge and was considered a naturally talented keeper but his career graph took a downward plunge with some ordinary displays in recent times. But the young man is determined to turn a new leaf on this tour.

Patel believed the Pakistan tour had been a good experience for him and he wanted to leave a mark as a series against the arch rivals was always special.

"I am very lucky to come to Pakistan. A lot of Indian cricketers haven't got the chance to come here in their career. It is a big series for me personally. I am trying to hold my nerve and play up to my standards."