After an Uber cab driver-- unable to pay his debt-- committed suicide on Sunday, protestors in Hyderabad's Begumpet have taken to the streets to vent their anger against the app-based taxi service. 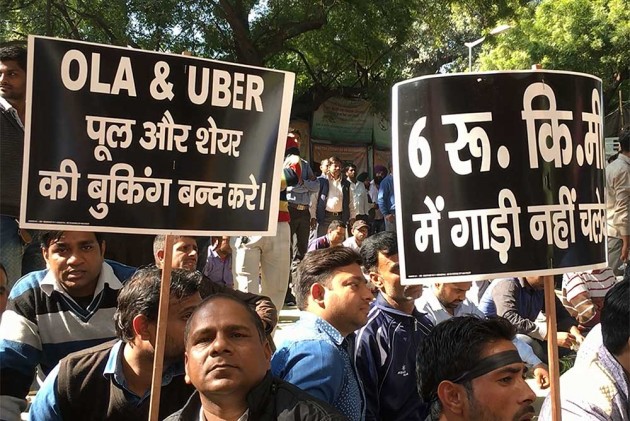 After an Uber cab driver-- unable to pay his debt-- committed suicide on Sunday, protestors in Hyderabad's Begumpet have taken to the streets to vent their anger against the app-based taxi service.

The 34-year-old cabbie M Kondaiah allegedly could not pay his car EMIs because his remuneration wasn’t enough.

Ola and Uber cab drivers are protesting nationwide against their organisations demanding pay hike and ease of working.

The worst hit is the national capital where the protest has entered fourth day. Commuters in the National Capital Region are likely to face a lot of trouble on Mondayas the app-based radio cab services Ola and Uber are set to remain off the roads. But auto and taxi drivers, whose business was eaten into by Ola and Uber’s services, decided to not be a part of the strike, reported Hindustan Times.

According to the paper, “From a blanket incentive plan of Rs 250 for every booked ride, irrespective of the distance, Ola and Uber started clubbing rides for a fixed incentive. Ola gives Rs 3,000 if a driver clocks six rides back-to-back, Rs 5,500 for 12, Rs 8,000 for 16, and Rs 11,500 for 19. Uber too offers similar incentive plans. This is over and above the fare. Of the fare, Uber or Ola take 20% as commission”.

The protests on Friday led to a massive crunch of cabs in the city due leading to surge pricing for every ride. The companies plying on limited stock, as a result, had to enforce 15-20% surge in prices, adding to the commuter’s woes.

The strike has been called by Sarvodaya Driver Association of Delhi, which claims to have 2,000 drivers in its group, and they demand better perks and relaxed hours for targets. The association hopes that 40,000 to 50,000 drivers will join the agitation.