How To Turn Off The ISIS Tap

As fasting for Ramadan began, a Sunni terrorist group popularly known as the Islamic State of Iraq and Syria proclaimed a caliphate, or religious-political dominion. ISIS also renamed itself “The Islamic State,” or IS. Across Iraq and Syria, IS has targeted key infrastructure for capture and revenue generation.

Unlike famous caliphates of Islam’s medieval Golden Age, this one is led by a terrorist, Abu Bakr al-Baghdadi, also known as Abu Du’a, regarded by followers as “imam and caliph of Muslims everywhere” despite Sunni leaders customarily refraining from acting as both spiritual guide and temporal leader. Under the name Caliph Ibrahim, he admonishes: “Terrify the enemy … your brothers all over the world are anticipating your brigades.” Even during Ramadan when goodwill is expected of all Muslims, IS’s Wahhabi fighters crucify other Sunnis for being moderates and gun down Shi‘ites as heretics.

The pseudo-caliphate now claims about 100,000 square miles, from Al-Ra’i, Salbah and Al-Nabak in Syria to Mosul, Fallujah and Al-Rutbah in Iraq. In peacetime this region supported approximately 3.9 million  urban residents. Violence has reduced that number to 915,600 – due to more than 1.9 million internally displaced, 969,600 external refugees and 54,300 deceased.

IS holds strategic stretches along the Euphrates River from Jarabulus to Fallujah, along the Tigris River between Mosul and Tikrit, and transit points along borders with Turkey and Jordan. It focuses control systematically on specific cities, highways, waterways, pipelines and natural resources (see map). Many locations such as Dayr al-Zur, Baiji and Tikrit, however, are still contested among IS, Jabhat al-Nusra and other jihadist groups; Kurdish Peshmerga; Naqshbandi, former Ba‘athists; and Syrian and Iraqi government forces. Pro-IS sites circulate images incorporating Turkey, Iran, Pakistan, India, Egypt, Morocco, Somalia and Nigeria into an expanding caliphate. 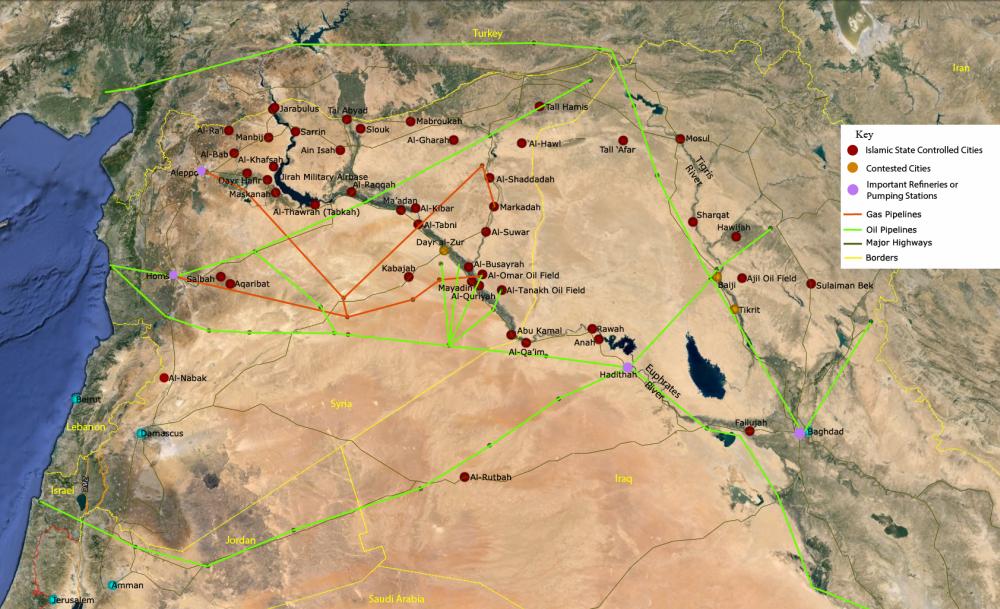 Dreams of future territories aside, and despite lacking authority over most of the world’s 1.6 billion Muslims, IS has become the wealthiest Islamist organization. According to western intelligence estimates, its net worth has risen to more than $2 billion. Its assets are larger than the sovereign wealth funds of nations like Nigeria, Panama and Vietnam. Most is hidden in bank accounts and vaults within Kuwait, Qatar and the United Arab Emirates and at safe houses within IS territory.

Recently, IS looted more than $500 million in currency and gold bullionfrom Iraqi and Syrian banks. Yet its long-term revenue streams are more mundane. IS’s videos on holy war attract Americans and Europeans disenchanted with the status quo. Those recruits hand over their passports, which are then sold to illegal immigrants heading westward. Ransoming captured and kidnapped opponents, landowners, merchants and western journalists is another small fiscal source just as for Boko Haram in Nigeria.

Funds for equipment and fighters came on a much larger scale from Sunni donors in Gulf nations like Kuwait, Qatar and Saudi Arabia. Lax banking regulations, traditional money-transfer networks and influential sympathizers there have been central to subsidizing IS, suggests the US Department of the Treasury. Fundraising is often public; contributors attending subscription dinners and charitable auctions make zakat, or charitable contributions. Donor campaigns and merchandise outlets have been launched via Twitter, Facebook and the Islamic State Report and Islamic State News of Al-Hayat Media Center. According to US intelligence sources, “hundreds of millions of dollars” are then transferred to these jihadists via internet banking, hawala privateers and couriers.

Even when donors are identified, they usually have been beyond the reach of western law enforcement. Now Arab monarchies, sensing danger to their largely secular existence, are beginning to join US and EU attempts to turn off private liquidity to terrorists. IS’s brutality toward civilians is another reason. Likewise Iran’s Revolutionary Guard Corps, which dallied with IS to counter US influence in Iraq, realize the threat to Shi‘ites. Perhaps archrivals Saudi Arabia and Iran will find common cause against this foe.

Like the Taliban in Afghanistan and Pakistan, Al-Shabab in Somalia and the Tuareg in Mali, IS entered the narcotics, human-trafficking and food-supply chains. When refugees, heroin and nutritional staples move across IS territory, the militants provide safe passage in exchange for currency, gold, jewelry, even electronic equipment and automobiles.

As IS establishes a bureaucracy, state-like activities provide sustainable income. The organization collects income, customs and other taxes and tariffs from residents. Al-Rutbah provides income from the Baghdad-Amman highway. Oil and gas from Syria’s Dayr al-Zur region and Iraq’s Ajil field are openly sold to Turkish, Jordanian and Lebanese dealers. A water-pumping station at Al-Khafsah and dam at Al-Thawrah facilitate control of the Euphrates. Hydroelectricity generation at Hadithah is targeted too. Monthly revenues of several millions of dollars are used to train fighters at $2500 each, billet them at $10 to $50 per day, and buy the loyalty of local populations with food, housing and municipal services.

Like the Taliban, IS subscribes to the iconoclasm of Wahhabi Sunnism. Yet, as artifacts from ancient and medieval civilizations of Iraq and Syria fall into its craw, IS sees profit from parlaying historical loot into cash – including at least $36 million from Al-Nabak in Syria. Likewise, IS commanders extend safety to non-Muslims in exchange for payment of the jizya poll tax, as medieval caliphate administrators once did.

IS has been assisted immensely by outsiders. Yet, its Wahhabi fighters are unlikely to be acquiescent toward their benefactors just as the Taliban turned on Pakistani patrons. Irrespective of whether donors fund IS for piety or profit, for community or politics, they cannot control ideologues and fighters. IS already speaks of overrunning the Arabian Peninsula: “oppressive idolatry rulers of the Muslim world will begin to fall one-by-one to the fighters’ swords.”

If they control substantial energy resources, IS and its backers may have clout on the world stage. But the United States, Russia and Venezuela among others can compensate for oil and gas embargoes. So, energy prices have not surged in response to the organization’s threats.

Thus far, religious zeal seems to be the primary motivation for IS funders, echoing the tension within Islam over whether the umma or community should be religious or secular. Not surprisingly Al-Qaeda affiliates in Arabia and North Africa are supporting the nascent caliphate. IS rewards them by showing no hesitation in bloodily stamping out widely held moderate versions of Islam and other faiths, too.

Strict regulation of capital and resource flows throughout the Muslim world must be put in place – similar to those imposed by the United States in the aftermath of 9/11 – to stanch funding and shrink recruitment. Centralizing records on terrorist backers, regulating every type of financial institution including those couriering cash across the Gulf region and through the Middle East, Asia and Africa, and limiting the value of cash transfers are vital. Registering charitable organizations and auditing their finances must become routine throughout the Middle East. Oil and gas trade and gold and antiquities smuggling with IS should be halted. Programs to identify dealings with militants, once in place, can stifle transactions between the extralegal caliphate and its neighbors.

The Islamic State may appear robust. But external fiscal flow and internal revenue generation can be halted quickly, leaving it with few resources for capturing Baghdad and Damascus let alone sustaining a caliphate of nearly a million people.

Carol E. B. Choksy is an adjunct lecturer of strategic intelligence in Indiana University’s School of Informatics and Computing. She also is CEO of IRAD Strategic Consulting, Inc. Jamsheed K. Choksy is chairman of the Department of Central Eurasian Studies in Indiana University’s School of Global and International Studies. He also is a member of the US National Council on the Humanities at the National Endowment for the Humanities.