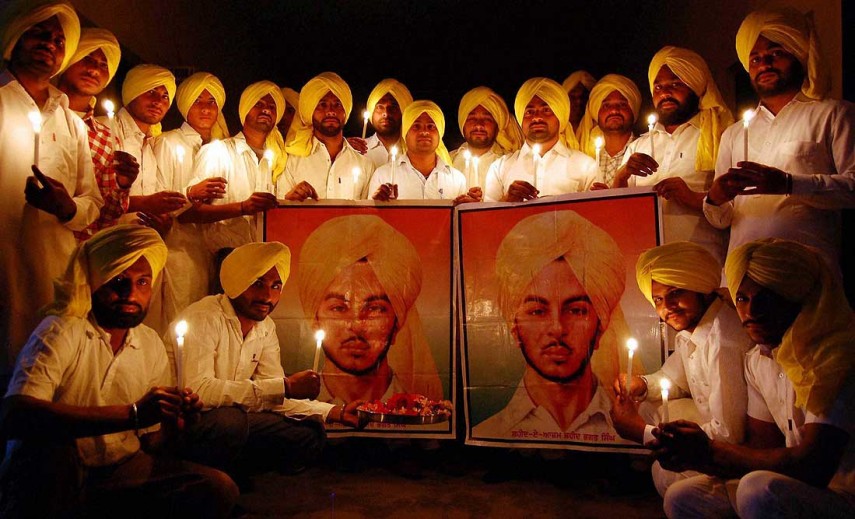 The ever-vociferous Khushwant Singh had been quite taciturn when it came to his father and builder Sobha Singh’s questionable role in the first conviction of Bhagat Singh.

Bhagat Singh faced two trials. The first trial was for charges of attempt to murder and conspiracy for the bombing of the Indian Central Legislative Assembly (CLA). It reduced the judicial process to a farce in the wake of the British colonial government trying to pin down two suspects with a quick conviction.

Bhagat Singh sat in the visitors’ gallery of the CLA (what is now the Lok Sabha) along with others. Two very important bills were under discussion.

The British government had tried to introduce a law to curb communism in the country. In those days, following the rise of communism in the USSR, leftist politicians several countries had started affiliating their political organisations with the USSR’s communist party. In Britain, some of the leftists also formed a Communist Party but the colonial government had tried to stop it in India. They first tried a Communist Deportation Bill which failed and then it was reintroduced as the Public Safety Bill in 1928 and then again in 1929.

The other debate of the day was on the Trade Disputes Bill, which was eventually enacted the next month. The legislation curbed many of the freedoms of industrial workers. It required a 15-day written notice for strikes and lockouts in public utility services. It became a foundation for tater versions of this law which were even more stringent and repressive for industrial workers.

It was no surprise that Bhagat Singh was present during the discussion on the Public Safety Bill which reportedly included a debate on how it had been reintroduced in 1929 despite a failure a few months ago.

Records of simultaneous debates in the British House of Commons on the Public Safety Bill 1929 are available online. The Bill, introduced in the Central Legislative Assembly (what is now the Lok Sabha) intended to target Communism in India. MP, Colonel Wedgewood asked the British undersecretary of state for India, Earl Winterton, if the British government was more concerned about communism than Indian nationalism. Communist MP of Indian origin Shapurji Saklatvala also pointed out that “…the primary rights of British subjects cannot be taken away from them, without the consent of this House, by any mere legislative act by the Government of India.”

Along with Bhagat Singh, a few others sat in the visitors’ gallery, which was above the house. As may be expected, this included journalists and freedom fighter-politicians. The odd man out seemed to be a businessman called Sobha Singh, then a contractor in Delhi. The British government gave him many important construction jobs such as Connaught Place and others in Lutyen’s Delhi.

When Vithalbhai Patel (Vallabhai’s brother) was about to announce the result of voting on the Trade Dispute Bill, a low-intensity explosion rocked the well of house. There were not many injuries and the trial judgment later noted medical reports that showed the six people had received “trivial injuries”. Forensics had also proved that the bomb was of low intensity.

When there is an explosion, the witnesses’ attention would automatically be towards the place where it happened. Besides, the people were absorbed in the CLA’s proceedings, including the lawyer Asaf Ali who later represented Dutt in the trial and cross-examined Sobha Singh.

The same man was again the exception to the general rule of everyone looking at the where the bombs had exploded – Sobha Singh. According to AG Noorani’s bestselling book on the trial of Bhagat Singh, Sobha Singh had later testified in court as a prosecution witness. He claimed to have seen the two youth throw the bombs.

"He [Sir Sobha] had arranged to have lunch with friends whom he was to meet in the House and his first anxiety was to discover their whereabouts. He found them sitting near the other end of the [Visitors'] Gallery in front of the place occupied by Bhagat Singh and Dutt. Hence at the critical moment his gaze was directed towards these two. He sent two policemen towards them from the opposite end of the Gallery and started to follow them," wrote Noorani.

It was said in court that the two youth Bhagat Singh and Batukeshwar Dutt waved their arms, shouted slogans and threw pink leaflets down to the House immediately after the explosion. Asaf Ali had later written that Dutt had voluntarily owned up for arrest because he did not want Bhagat Singh to be held and tried alone. Some witnesses claimed to have heard shots fired while the police had claimed that they had taken a gun from Bhagat Singh’s possession.

“Bhagat Singh and Dutt were irked by the allegation that they had fired shots from a gun. It was apparent that the government was not limiting the case to the bombs thrown in the Assembly. It was introducing extraneous elements to ferret out more information about the revolutionary party and its agenda,” writes the Indian Law Journal.

None of the visitors had actually seen Sobha Singh, nor did they testify to the fact. Others who researched the trial extensively had opined that Sobha Singh was a chance witness and even the magistrate was not impressed with his testimony.

What was Sobha Singh’s cause for allegiance to the British government? Difficult to say, except for the construction contracts.

Why is he important? He was knighted to Sir Sobha Singh by the British 15 years after Bhagat Singh’s trial. His son Khushwant Singh went on to become a famous journalist and writer and made unconvincing attempts to try and rewrite the history about his father.

In one such attempt, he had also reached out to Manmohan Singh, when the latter was prime minister to try and rename Windsor Place in Lutyens Delhi to Sir Sobha Singh Road.

Based on the sketchy testimony of Sobha Singh, the magistrate had convicted Bhagat Singh and Dutt and sentenced them to 14 years despite it being a low-intensity bomb, meant to shake things up and not kill people.

In the meantime, the prosecution in the Saunders killing case had collected several witnesses, including associates who turned approvers. The judge mentioned in his order that the Saunders trial was awaiting Bhagat Singh and rejected their appeal swiftly.