In an exclusive interview, the Japanese Prime Minister says that when it comes to supporting India in the NSG on the Indo-US nuke deal, utmost importance will be on nuclear non-proliferation. 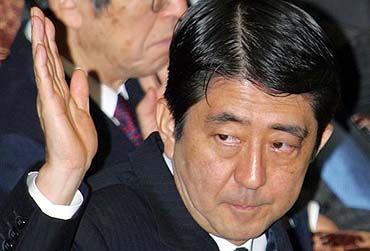 Japanese prime minister Shinzo Abe's office is an architectural marvel. Spiffy and elegant, the foyer has exquisite installations and sculptures. The prime minister, immaculately dressed in a pin-stripped suit, meets me in a wood-panelled ante-room. A hand-shake, and the interview begins.

Do you think the visit of Dr Manmohan Singh marks a new beginning in Indo-Japanese ties?

Will your government support India when the nuclear issue comes before the Nuclear Suppliers Group (NSG)?

I am of the view that in the NSG meetings there have been significant discussions taking place concerning the US-India (Nuclear) Agreement. As you know, Japan, among all the countries in the world, is the only country that experienced an atomic bomb (attack). So our ultimate objective is the total abolition of nuclear arms. We are actively deploying our activities towards that end. We place utmost importance on nuclear non-proliferation. Based on this stance, I would like to have discussions with PM Singh during his visit next week.

Will Japan's foreign policy towards India be independent of Pakistan? Do you see India emerging as a leader in the region to fight terrorism?

Japan and India share the basic values of freedom, democracy, basic human rights and the rule of law. The relationship between the two countries are based on shared values and interests. This should be the bedrock for the potentials and the opportunities between us. In that sense, I wish to bring the Japan-India relationship up to the higher level of strategic global partnership. India suffered from the bomb attack in the markets of Delhi in October last year as well as simultaneous bomb attacks in train in Mumbai in July this year. India, indeed, has been in the forefront of the fight against terrorism. India has been playing a very important role in the international community in the fight against terrorism—it being the first proponent for the negotiations on a comprehensive treaty on prevention of terrorism. Japan and India are firm partners in the fight against terrorism. In the future also we would like to cooperate with India to eradicate terrorism.

The clandestine role of Pakistan in North Korea's nuclear programme is now well documented. How do you propose to address the issue?

I understand the government of Pakistan denies any involvement in the proliferation of nuclear-related technology to North Korea. Whatever the form it may have been in, the proliferation of nuclear related technology by Dr (AQ) Khan is regrettable. And we have conveyed our view to Pakistan and have asked for related information for the purpose of investigation. So our firm position is that possession of nuclear arms by North Korea will never be tolerated. We would like to make the coming six-party talk a forum where, as a first step, North Korea will be asked for total abolition of all nuclear arms as well as (end its) existing nuclear programme. I say this because holding the six-party talk itself is not the end in itself. We will be gathering there to review the result and outcome, therefore we would like to make it a first step towards that end.

Mr Prime Minister, what precise strategic content you have in mind that would enable scripting of a comprehensive economic partnership agreement (EPA) between India and Japan?

The extent of the coverage of the agreement will be discussed in the first round of negotiations, but in any case I'd like to make the EPA comprehensive, covering not only the services of liberalization but also the concerning provisions to maintain other trade-related activities. I do believe that in our relationship, there is still a large room of potentiality and opportunity yet to be tapped. And I am confident that conclusion of EPA between the two countries will bring large benefits to both our countries, for the sake of our future.

Mr Prime Minister, after this visit does India get the most favoured nation status from Japan?

As I mentioned I do firmly believe that the Japan-India relationship is one of the most important bilateral relationship in the world and in that sense I am very much looking forward to the active exchange of views with PM Singh next week. In that discussion, of course, we will naturally be discussing economic and business matters as well.