#Hokkolorob: Let There Be Clamour

From Jadavpur to everywhere: It must not end. It must spread.

More then one hundred thousand students and their friends (according to Kolkata Police estimates) defied the rain to walk in protest on September 20 against the assault on Jadavpur University by Kolkata Police, backed by an insensitive University Vice Chancellor and a cynical state government. There were students, ex students, professors, students from Presidency University, and many other colleges in Kolkata and the neighbourhood, there were many ordinary citizens, some who had never been university students, and many who had stopped being university students a long time ago.

In the past few days, there have been also been protests in solidarity, in Delhi (at JNU, Banga Bhavan and Jantar Mantar), at IIT Chennai, IIT Mumbai and IIT Kharagpur, Pondicherry, Hyderabad and in Bangalore.

The #Hokkolorob hasthag (‘Let There Be Clamour’ — ripping off a famous song by the Bangladeshi singer Arnab) spreading everywhere embodies the acrid yet fragrant air of the last few days. 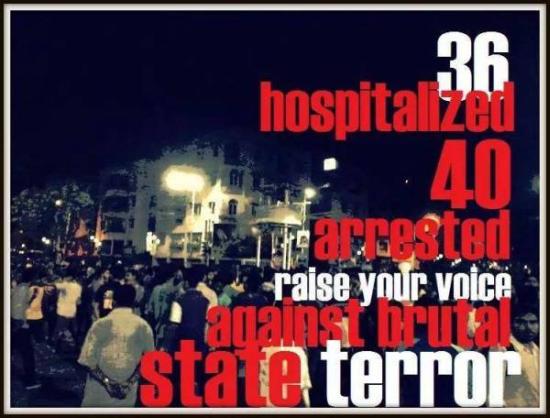 Why are the students in Jadavpur, and their friends elsewhere, so angry? What makes so many young people set aside studying, parental worries, anxieties about jobs, the endless distractions of mindless entertainment, the orchestrated frenzy of consumerism to do with the coming ‘Durga Puja’, and inclement weather — to come and stand by each other? And to realize that they may be in this, together, not just for one turbulent night, or for one rainy afternoon, but for the long haul?

First of all, We need to understand that by their actions, the University Vice Chancellor and the Authorities in Government who stand by him are the primary provocation for this outburst of rage. They are squarely responsible for the mess Jadavpur University is in by actually protecting (with their inaction) those who molested and assaulted a young woman student and her friend some days ago.The Chief Minister of West Bengal has dismissed the entire episode as a ‘chhoto ghotona’ ( an insignificant event). The state’s education minister, Partha Chatterjee has actually said that—

“I won’t be responsible if members of Chhatra Parishad, professors and others who want normalcy in the education sector also launch a movement of their own. We are requesting them (students of JU) to resume the classes and not waste their academic year by this movement. They have voiced their protest and now they should go back to their classes”

What this means is that basically, Partha Chatterjee is threatening to unleash TMCP cadre and allied goons on to the students of Jadavpur and elsewhere in West Bengal in order to ‘restore normalcy’ in the education sector in the state. A call by the Trinamool Cchatra Parishad (Trinamool Student Council) and other Trinamool front organization for a counter-demonstration in Kolkata in support of the Vice Chancellor of Jadavpur University means that the Trinamool Congress and the Government of West Bengal actually want to raise the stakes in this confrontation.

What they do not realize is that young people today, especially in the wake of the turbulence that took hold of young people in the aftermath of the 16 December rape in Delhi, will simply not take such a provocation (and prevarication on instances of sexual assault in a university by the authorities and the police are a provocation) lying down. Had the vice chancellor and the university authorities wanted, they could have dealt with the matter with promptness, sensitivity and intelligence. Instead, to please their political masters in the Trinamool Congress Party, they tried to shield the actual reign of thuggery that they preside over in the campus of Jadavpur University. It is the Vice Chancellor, not the students, who need to understand what ‘decorum’ and ‘discipline’ in a university mean. The students, on their part, have shown restraint. Their protest has been peaceful, laden with music and humor. The onus for inaugurating violence on campus (like in June 2005, when it was the CPI(M) led Left Front Government that unleashed police on peaceful students in the dead of night) lies not with them, but with the highest authorities of the university and the state government.

Jadavpur University Vice Chancellor, Abhijit Chakrabarty, in an interview with News X, refused to accept the demand for his resignation. He also fantasized. His imaginative prowess, as evident in his responses in the televised interview, included statements to the effect that the students of Jadavpur University were being manipulated by Maoists, Drug Lords and a Liquor Mafia. He said that he feared for his life on the night when the students gherao’ed him. We fear for his sanity.

These incidents come in the wake of an equally unfortunate incident in Shantiniketan, in Vishwa Bharati university, where once again, a callous administration humiliated a students from Sikkim and her family, asking her to leave the campus when she complained of sexual assault. There is a pattern here. University authorities and the ruling political culture in West Bengal are simply unable to cope with young women demanding dignity and autonomy. Their first response is ‘victim shaming’, (even in Jadavpur, the ‘professors’ sent to inquire into the victim’s complaint made absolutely irrelevant and unnecessary statements about her attire and her personal life-choices. Their second response is a refusal to follow due process and their third response, when it comes to a crunch, is to call in the police and unleash violence.

This is not a question just about students or women alone. This is about the way in which people in power view those who they think they wield power over. This is the same smug arrogance that is routine in factories and offices where managements treat workers and employees with contempt. It is the same arrogance that makes patriarchs and politicians insult the autonomous choices made by young people by invoking the poison of ‘love Jihad’. It is the insults that the powerful throw at dalits, and especially young dalit women and men who are trying to carve lives of dignity with education, by wearing what they want to, by simply being ‘present’ in public space. It is the racist slur that the Delhi landlord throws at his young north-eastern tenant. Each of these instances is an offensive in war that has been unleashed on the young. On students, on young women, on young workers. It is a war on love, on pleasure, on friendship, on solidarity and on the right to lead one’s life with dignity and with freedom. And now the young are beginning to fight back. 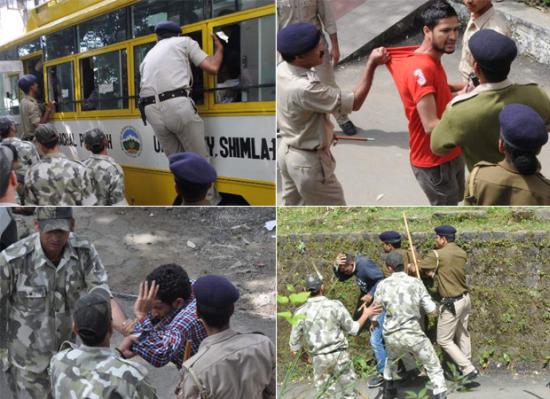 “How do you deal with peaceful student protest?”

“Send in the thugs and the lathi charge”.

The students of HPU may not be as well connected, or they may or may not be as ‘in’ with using social media as their peers in Jadavpur obviously are, to spread word of what is happening to them, nor may the mainstream media be listening to their story, but they are just as deserving of our support and solidarity.

The ‘Kolorob’ or ‘Clamour’ that the students and young people of Kolkata have invoked out of the thinning air of an atmosphere marked by despondency all over the country has broken a stifling silence. This clamour needs to grow. Every corner of sullen cynicism, every pedestal of arrogant power, every new found throne and smug cushion of entitlement needs to be thrown away and torn down. Time for a new beginning, not just in Jadavpur, not just in Kolkata, everywhere.

This post on Kafila is a homage to the incredible passion, creativity, good humor and solidarity that the students of Kolkata have brought back to the city, and even to those of us who have been following them from a distance.

A song created almost instantly by Rupam Islam, in solidarity with the students, says — ‘Andoloner Shuru Aacchey, Shesh Nei’. (This movement has a beginning, it has no end).

It must not end. It must spread. Until every university, and every factory becomes a laboratory of a joyous, loving, creative renewal of learning, life, love and labour. Some might choose to call that a revolution that has no end.

I would not disagree.