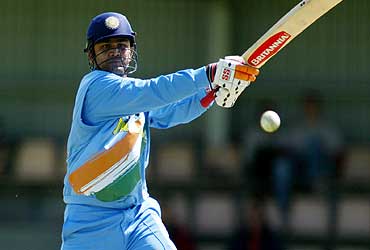 India have a rare opportunity to round off a golden summer for themselves on Australian soil. Much as their batsmen have frustrated the home team, true lovers of the game have relished their silken style at the crease. They have been unhurried yet dominant, graceful yet ruthless.

But it is the Australians who have a psychological edge going into the tri-series finals. I am not saying this because Indian batting struggled in the two league games at Perth. It is just that Ricky Ponting's men have that extra confidence with Brett Lee back to his destructive form. Again, it is not because of his success in Perth. It is just that matter of feeling.

Indian bowling has been good and I cannot overstate the case of Irfan Pathan and company. One of the many good things that has happened for India on this tour is that their bowlers have continued to develop. Youngsters like Pathan and Balaji have shouldered the responsibility well. They are India's bowling hopes, in this series and beyond.

Yet they have not been able to stop the Australian run-making machine. There is nothing at this point of time to make us believe that they would do so at Melbourne and Sydney either.

There have not been very clear-cut messages on Anil Kumble's fitness, so I would go with the media reports and believe he is struggling for the finals. It is a shame really, for Kumble has the class and experience to lift his performance that extra notch in the finals.

He is a big match player and there is this pride to play and win titles for your country. He was not given a chance in the World Cup finals, and he would not like to miss a similar opportunity again. He would love to finish off a process which he could not do in the Tests.

The Indian batstmen then will have to take up the responsibility. They have to be at their very best to keep Australia on the mat, and it is not going to be easy. It is an irony indeed, for they have had the world champions at their mercy on this tour.

But let me not give the impression that I am completely writing off Saurav Ganguly's men. Throughout the summer they have shown they are perfectly capable of giving the Australians a run for their money. And a few of the Indian seniors would love to lay their hands on a rare trophy in Australia.

Neither am I inclined to read too much into the struggle of the Indian batsmen in Perth.

Even for us Australians it is not easy to come and score runs at WACA. There was a time when Western Australia had a dominance in domestic cricket and it was because they enjoyed such unique conditions at the WACA. The other state sides used to come here every year and struggle.

So, when even the locals take some adjusting to its pace and bounce, you cannot read too much into the Indians' failure. Over the years Australia have loved giving visitors a taste of the WACA's unique offerings. Except for the West Indies of the 80s of course! The Perth pitch had its typical pace and bounce and, in retrospect, Australia would have loved to play India on such type of wickets.

The other venues offered good wickets and the Indians bloomed but here they struggled. It was not because of any technical deficiency, they remain marvelous to watch. It is just that the WACA, like hot spicy Indian curry, takes some time getting used to.

Lee of course has now got his tail up. He was fired up on Sunday. He was responsible for the Indians losing half their side for 79 runs -- a rare happening this summer. It was very difficult for tail-enders to make any substantial contribution from then on.

Sachin Tendulkar and Virender Sehwag might have been rusty but they are too good players to fail regularly.

They would be in far more familiar terrain in Melbourne and Sydney. Everyone knows they chalked up their best Test scores at these venues -- 195 for Sehwag and 241 for Tendulkar -- and the memory of those knocks should keep the Australians uptight.

Ganguly did not play the last league game (against Zimbabwe) but one cannot be too worried about him. He knows his game and it does not serve any psychological point either way to presume he would have been better off playing on Tuesday. His absence has thrown up Hemang Badani's credentials for the left-hander took India past the finishing line.

Looking at all those clutters at the helmets at the WACA, you tend to think all these protective gears have been a boon for batsmen. Over the years, helmets have saved some very serious injuries.

Mark Vermuelen fractured his skull and it could have been a far more serious injury had the grill not been around. It has given batsmen that courage to stay in line. It has prolonged a few careers and other gears have avoided rib injuries -- a common occurrence when facing a fast bowler on wickets which are doing a bit.

It is a shame that Glenn McGrath and Shane Warne were not around. They might have been tested as never before in their careers. It is one of those ponderables of the series!