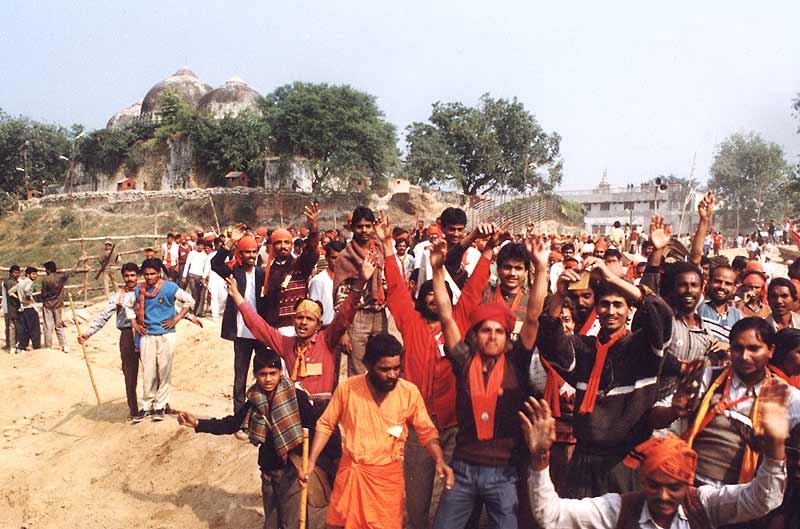 Heavy security deployment was made in the twin towns of Faizabad and Ayodhya as the VHP and the Bajrang Dal plan to observe 'Shaurya Diwas' (Day of Valour) while Muslim organisations plan 'Yaum e Gham' (Day of sorrow) to mark 25 years of Babri Masjid demolition.

Taking note of the gravity of the situation and the advisory issued by the Centre, the Faizabad administration has made heavy security deployments in the two towns.

Police along with the CRPF and RAF have been deployed on roads and sensitive localities of Ayodhya–Faizabad. Regular search operations of the vehicles, hotels and dharamshalas in Ayodhya are being conducted.

The Vishwa Hindu Parishad (VHP) has given a call for grand celebrations on 6 December to commemorate the silver jubilee of the demolition. Its associated organisation, the Bajrang Dal, will celebrate December 6 as 'Shaurya Diwas' and 'Vijay Diwas' (Victory Day) and have also issued appeal to people of Ayodhya - Faizabad to lit up their homes with lamps.

Talking to PTI, VHP spokesman Sharad Sharma said that not only homes but also temples in the temple town of Ayodhya and adjoining city Faizabad would be decorated and the day would be celebrated with much fan fare.

As per our tradition we will organize a 'Shaurya Diwas' and 'Vijay Diwas' in Karsewakpuram, the VHP headquarters in Ayodhya, he said.

Meanwhile, some Muslim organisations in Ayodhya - Faizabad will observe December 6 as "Yaum E Gham". A functionary of the Indian Union Muslim League said they will observe this day as Black Day.

Talking to PTI, Afaq Ahmad Khan, Chairman of Babri Masjid Action Committee, said, we are in waiting for the last 25 years for justice, we wish that the Government of India must fulfil its promise of reconstruction of Babri Masjid.

Faizabad SSP Subhash Singh Baghel said heavy security deployment had been made in the twin towns of Faizabad – Ayodhya. The police along with CRPF and RAF have been deployed on roads and sensitive localities of Ayodhya–Faizabad, he said.

"Regular search operations of the vehicles, hotels and Dharamshalas in Ayodhya are being conducted. We have maintained all necessary security arrangements and have allowed only traditional programmes to be held by both the communities," he said.