The border trade point between India and China reopens soon, and the bonhomie at this border between troops on either side, currently witnessed twice a week when mail gets exchanged, will get tested when the traffic increases. 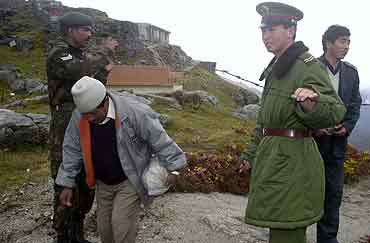 Wanding Tamang is dreading the day when his mail bag will be so heavy with letters and parcels that he cannot walk the four Kilometres distance that he has been covering every Thursday and Sunday up to the Nathula border post between India and China in the tiny Himalyan state of Sikkim.

An employee of the Postal department, so far Tamang mainly carries letters from Tibetans in India who write to their relations and friends across the border in the Beijing-ruled Tibet. But soon Tamang may need help in terms of transportation once Nathula reopens as the border trade point between India and China following an agreement on this point between the two governments during Prime Minister Atal Behari Vajpayee's recent China visit.

Once trade resumes, the postal department will have a lot more work to do than just exchange the mail bags twice week as it does now. Since Nathula is the only overland international mail exchange facilities between the two countries so far, Tamang's hand will be full once the trade resumes in the very near future.

At present, the mail exchange lasts exactly three minutes beginning 8.30 am. On Thursdays Tamang walks past the barbed wire fence into the Chinese territory, goes inside the building, obtains a receipt from his counterpart and in turn brings another bag from that side. On Sundays, Yaling, Tamang's counterpart follows the same routine under the watchful eyes of Army troops on either side.

The mail exchange is also an occasion for a lot of bonhomie between the troops on either side. Chinese officers and soldiers, some with their wives and children, start shooting photographs. They beckon Indian soldiers to come and join hands across the fence. For Indian officers and jawans too these two days are a break in the monotony of braving high altitude, loneliness and sheer boredom.

Sikhs are a big hit. An old-timer recalls: "The Chinese want Sikh soldiers to come and pose with them. After all, Sikhs are easily distinguishable among the Indians. When they go back home and show the photographs taken at the Indian border, their claims are believed only if Sardars are in the photographs!"

The routine over, the soldiers retreat to their respective posts, which are just 500 metres apart. A long wall is all that separates the two countries. Both sides can watch each other closely, come snow, storm, fog or rain. 'Watch' is the operative word here. A senior army officer could well be reciting his manual: "Constant vigil is the key to border management."

On the ground, there is no tension between the two forces. There are no firearms on display here. In fact, it is the ubiquitous black umbrella, which almost everyone carries to ward off a sudden drizzle or a light snowfall that is the constant companion of soldiers here.

Beneath the apparent casualness with which the troops move about lies the steady routine of constant vigil on Chinese activities. The army knows if the Chinese want to create mischief along the Sikkim border, Nathula would be a major trouble spot. Not only is it well-connected by an all-weather, black-topped road, it is also just a two-hour drive from Gangtok, the Sikkim capital, which, in turn, is less than 150 kilometres away from the plains of north Bengal.

Not that there is anything untoward happening here. A staff officer of the Nathula Brigade agrees: "Things are as normal as can be."

To remove any possible misunderstanding, officers from both armies meet twice a year -- once in March and once in September. 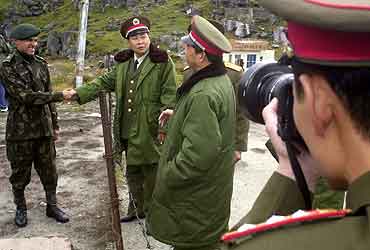 The commander of the Nathula Brigade represents India while the Chinese colonel, in charge of the border defence regiment posted to guard the border, represents China.

The last recorded skirmish between the two forces in Nathula was way back in 1967. A dispute about bunkers and defensive positions led to a fortnight-long conflict that saw a young Indian captain earn a posthumous Vir Chakra for his bravery. Since then, things have been quiet. And, unlike the Kameng sector in Arunachal Pradesh, the Chinese have refrained from 'nibbling' away at the Indian border. As a senior army officer says: "There are no disputes here unlike in Aksai Chin or Arunachal Pradesh." As a result, the last meeting, held in September got over in less than 10 minutes.

But all that will change when Nathula reopens for trade. A lot more activity will be discernible at the post with a lot more civilians -- ranging from customs officials, traders to truck drivers and tourists -- flocking to the area.

As of today, however, the soldiers live in splendid isolation. They feel that the isolation and physical problems resulting from staying at super-high altitudes are more lethal than enemy threats. As an officer posted under the Nathula Brigade says: "At this altitude [14,600 feet], a man's physical efficiency reduces by over 40 per cent. During winter, when the oxygen level in the mountains falls further, it is painful even to walk short distances. You can imagine the plight of troops staying at posts which are at even higher altitudes than this one."

But the army knows how to take care of its soldiers. Every man posted here has to undergo an acclimatisation process before crossing the 10,000 feet barrier. A transit camp, located midway between Gangtok and Nathula at an altitude of 10,370 feet, is the first stop for anyone going up for deployment. A six-day routine is followed. For first two days, troops are advised to rest and get used to the altitude. From the third day onwards, they walk about three Kms and on the final two days, the walk is for five kms with a climb of about 300 meters thrown in. It is only after this routine that the soldiers are allowed to go further up.

The troops are well looked after, well-fed and given the best of facilities for recreation. Despite such care, isolation can also prove unnerving. Although no jawan is allowed to stay alone, the fatigue of seeing the same faces over and over again gets to them. Hence, any visitors, be it journalists or touring generals, are a welcome respite from the monotony.

If the top brass tries to keep up the morale by looking after the troops, the soldiers themselves attempt to find solace through devotion to a common deity. But their deity is not god; it is a dead soldier.

Baba Harbhajan Singh is the presiding deity of the Nathula Brigade. Three decades ago, he was an ordinary soldier posted here to escort the mules that carried supply loads. One day he died -- buried under an avalanche.

End of story? Not quite.

Some months after his death, the commanding officer of his unit, the 23rd Punjab, apparently saw Harbhajan Singh in a dream. The dead soldier apparently urged the CO to construct a small samadhi (memorial) for him, which the officer promptly did.

Today, every soldier in the brigade pays his respect to 'Baba' Harbhajan Singh. Every Sunday, a langar (free food) is organised at the temple. All the soldiers posted here believe they are blessed by the Baba, who looks after their well-being.

To those who do not live for days on end, under hostile conditions, in these mountains, this blind faith may appear inconsistent with rational and modern thought. But, as a staff officer of the brigade says, "It is this kind of faith that sustains the soldier in these extreme conditions."

Clearly, faith, and, as the manual would say, constant vigil and devotion to duty are on permanent display at this frontier.