Going by the book is one thing; looking at the bigger picture and spirit of the game quite another. The big Aussie not only had to believe, but also had to show that the game was paramount bigger than the players, Inzamam and himself. 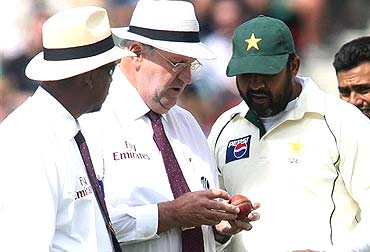 My sympathies in the stand-off between umpires and the Pakistani team at the Oval are with Inzamam-ul Haq. There have been many people, including some former Pakistan players and captains, saying that he was wrong in forfeiting the match. But given the way the drama unfolded, I would have refused to carry on unless umpire Darrell Hair told me who the bowler was who had tampered with the ball.

Cricket's biggest crisis since match-fixing actually need never have been had some of the people involved in it been less egoistic and more far-sighted. I still cannot fathom why with so many influential people present at the match, including the umpires, the captains, the match referee, the PCB chief, matters came to such a pass that Pakistan forfeited a Test match.

In my opinion, what happened is a travesty of the game. Going by the book is one thing; looking at the bigger picture and spirit of the game quite another. That is where umpire Darrell Hair's approach was flawed. He not only had to believe, but also had to show that the game was paramount bigger than the players, Inzamam and himself.

I'm afraid the big Aussie made a hash of it with his stand-offish approach. In this day and age when technology is available at the click of a mouse, I see no reason why Hair did not use it to his advantage. In fact, had he referred that matter to the third umpire or the match referee, the issue could have been settled within minutes for all that was needed was for somebody to check if any footage of ball-tampering was available.

It was apparent that without any proof, Hair was skating on thin ice. Thereafter, his ego and stubborn personality took over, complicating the matter to a degree from where it became extremely difficult to come back. By contrast, Inzamam was humble and stayed calm. This is where I believe the match referee, Mike Procter, should have stepped in, because it was rapidly becoming one man's whims against the conduct of the game.

I know of a few umpires in my time who would have handled the situation differently. Dicky Bird, David Shepherd, M Gothoskar, to name only three, were wonderful influences in the middle simply because they were primarily interested in ensuring that a game was played out completely. Of course, it was a difficult situation for Hair. But if umpires are unable to resolve such crises, they would not be needed.

Yet, I am surprised that Procter, with years of experience as player, coach, manager and referee, played such a passive role in defusing the crisis. Anybody could not see that every minute's delay was only worsening the situation.

As the supreme representative of the ICC, Procter should have stepped in as soon as he saw the bristling Hair penalize Pakistan five runs. In fact, he should have pulled up both Hair and Inzamam at tea time and had a serious dialogue which clearly suggested that whatever the problem, egos had to be buried and the show had to carry on.

This has been a sad and wholly unnecessary controversy, which has only maligned the name of cricket. With Hair coming out as he has in the past few days, clearly there are dimensions to the issue which were not apparent on the fourth day of the Oval Test.

I can't see Hair having any leg to stand on after this, which means the ICC is like to review his appointment in the Elite Panel soon. But the damage caused to the game may take a long while to remedy.