In the end, the best man won. But Lance Armstrong wasn't the only class act in the centenary edition of this great bike race 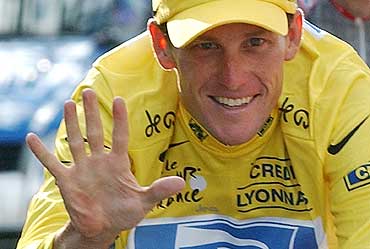 Much like the Green Jacket in golf and the Australian Baggy Green in cricket, the Yellow Jersey in cycling has come to acquire mythical proportions. Worn by the leader of the Tour de France through the race and presented to the winner of this gruelling trek on the saddle, the Yellow Jersey is the most coveted prize in the sport of cycling. Woven by the threads of sporting history and achievement, these pieces of golden fleece radiate dramatic stories of cyclists conquering all manner of obstacles to win this great (sometimes strange) bike race.

Given the overriding historical, sporting and human overtones attached to the Tour, it’s only fitting that, in its centenary year, it is Lance Armstrong -- a cancer survivor and a reformed man -- who is draped in screaming yellow at Champ Elysses in Paris. It’s his fifth consecutive Tour win, equalling Miguel Indurain of Spain.

It’s also fitting that this year’s Tour will go down in sporting lore as one of the most memorable ever, with so much happening to, and around, the leading bunch. Right through the three weeks and the 3,000-odd kilometres, the leading cyclists created, or fell victim to, moments that were fleeting in the context of the overall duration of the Tour, but were powerful reminders of why the Tour is such a challenge and so special.

History will remember CSC rider Tyler Hamilton’s courage in soldiering on despite breaking his collarbone in a high-speed pile-up on the very first day. The injury forced this slight American rider to sleep on his back instead of his preferred side position and use his left hand to exchange greetings. But, those were the least of his worries. The injury restricted his mobility on the handlebar, to which he had to add six layers of extra padding so that he would have to work his arms and shoulders less. Yet, not only did Hamilton ride all the way to Paris, he did it with resolve and stayed competitive, finishing fourth overall, winning a mountain stage after holding on to a dare-devil 140 km solo breakaway and helping CSC finish first in the team standings.

History will remember Jan Ullrich’s grace and nobility. When Armstrong (and Iban Mayo) took an unlucky tumble on an especially painful climb through the Pyrenees, Ulrich didn’t take advantage of his opponent’s momentary handicap and make an attack to the finishing line. He waited for Armstrong to catch up, probably replaying a similar moment in a similar chase two years ago, when the German ended up in a ditch and the American waited for him before resuming racing.

It’s another one of those unwritten codes in the Tour that a race is won or lost on the road, not off it -- and Ulrich honoured it. Armstrong, recounting the 2001 incident, would later say: "Jan is a good guy, he's an honourable guy. He probably didn't forget that when he crashed in 2001, I told everyone: 'We can't race until he gets back up.' As we say in English: 'What goes around comes around,' and so I appreciate him doing that."

History will remember Joseba Beloki’s cruel shunt from the race. One of the favourites and looking extremely strong, Beloki was setting a punishing pace in searing heat for Armstrong on a high-speed descent through the Alps, when his wheels caught a piece of melted tar, simply folded up, and consumed him. As he lay on the side of the road, anguish writ large on his face, one wondered what hurt Beloki more: the pain from a broken hip and shoulder, or the knowledge that his dream of winning the one race that he, as other cyclists, had waited for all year long was over.

Armstrong did realise his dream, with an efficient ‘drive for five’. The American from Austin, Texas, wasn’t half as dominating as his previous four race wins, but when it mattered, he invariably had a gear or two in reserve, which he used with punishing effect. After the first of the two trips into the mountains, Armstrong held only a slender lead of some seconds over his rivals, which slammed some critics into saying that he had been finally caught.

So towering -- and occasionally absurd -- are the benchmarks reserved for the best that Tiger Woods is said to be "in a slump" because he hasn’t won a major this year; as if, his 4 wins in 11 tournaments for the year counts for nothing. Likewise, till that dramatic adrenaline-fused surge on Luz-Ardiden, Armstrong’s slender lead was considered as proof of his fallibility, not a rider digging deep to hold off a pack snipping at his wheels. Much as the mind wonders how the race would have unfolded had Hamilton and Beloki not crashed, it also marvels at the greatness of Armstrong.

It’s hard to win a Tour. It’s harder to win five on the trot. It’s even harder to win after being stricken by a debilitating medical condition that gives you a 40 per cent chance of staying alive. Apparently, not if you are Armstrong, who constantly reminds himself and whoever wants to listen that surviving testicular cancer was the best thing to happen to him -- he got another perspective on life and death, which changed him, as a cyclist and as a human being.

He wrote a book about it with Sally Jenkins (It’s Not About the Bike: My Journey Back To Life) and another (Every Second Counts) is due in October (a chapter from the book can be read on his website, www.lancearmstrong.com). The writings mirror the man and all that be believes in and stands for, and put a positive, inspiring spin on battling adversity and suffering: "Before I was diagnosed, I was a slacker. I was getting paid a lot of money for a job I didn’t do 100 per cent, and that was more than just a shame -- it was wrong. When I got sick, I told myself: if I get another chance, I’ll do this right -- and I’ll work for something more than just myself."

In his ‘second life’, Armstrong got it right -- in more ways than he might have imagined. The five Tour wins aside, he’s been singularly responsible for initiating a whole legion of cycling fans around the globe and propelling the sport forward. He’s a beacon of hope for thousands of people diagnosed with cancer in the US, probably other countries too, for whom survival is a daily endeavour. He uses public forums to talk about cancer and overcoming odds -- knowledgeably and humanely. Survivorship is the core theme of his Lance Armstrong Foundation, which helps people in various ways to deal with cancer and its after-effects.

Armstrong’s popularity in his own country stems more from being a cancer survivor who has become an over-achiever in his calling, less from being the best road cyclist in the world. In the US, cycling remains a fringe sport. A majority of Americans don’t appreciate the nuances of the sport -- the sheer arduousness of the task, plus the tactics and the strategies. Sportswriters there constantly resort to analogies from other, more popular sports to explain the enormity of Armstrong’s achievements. In fact, on the day of Armstrong’s record-equalling win, the lead story on the Sports Illustrated website was baseball.

Some of this apathy is understandable, for cycling is a unique sport and the Tour de France a unique event. The very act of cycling is repetitive in nature, and therein lies its dullness as well as appeal. The disinterested see a machine at work, the interested see a rider who has just pedalled 200 kms over five hours and yet is pumping hard on his bike.

The Tour itself is a bike race, but most riders are content to pedal along bunched together for long stretches, giving little impression that they are racing each other in a competition. Racing happens in bursts, usually at the end of a stage. Then, every stage sees a different set of riders attacking, with the leaders holding back till the mountain stages, where the race usually gets decided. There’s also the big influence of the team. Contrary to what it might seem, cycling is very much a team sport.

Armstrong, like other cyclists, would never win the Tour without his support cast of eight riders, who are appropriately referred to as domestiques (French for ‘domestic’). The other eight riders in the US Postal Service team, which is referred to as the ‘Blue Train’ or ‘Lancemobile’, all ride with a singular objective: to see Armstrong wearing Yellow. It means protecting Armstrong from ugly crashes in the peleton (the main bunch of riders) and from the wind by escorting him in their slipstream as far as possible; this effectively means that Armstrong will expend around 30 per cent less energy to ride the same distance. It means using their energy so early on in the race that the latter stages become an even bigger race of attrition. It means working like a mule and stifling all personal ambitions. It means doing a lot of dirty work for Armstrong, but seeing him corner the glory. Of course, if Armstrong wins, they win.

Apart from being one of the most eventful Tours, it was also one of the closest. Said Armstrong: "It's definitely been the most stressful considering my physical and mental fatigue. This year it's all been multiplied by a factor of 10." This Tour showed he’s got worthy in Ullrich, Beloki, Vinuokourov and Hamilton, each one capable of winning and probably itching for another shot at him.

Armstrong intends to come back next year, in pursuit of a sixth Tour. It’s set up beautifully. Armstrong thrives on being the marked man, and there are many who are in search of redemption, and will have him and the coveted Yellow Jersey in their sights.