The BJP has rubbished Narendra Patel's charges and said it was a "drama" staged at the behest of the Congress. 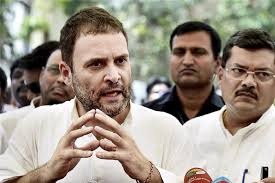 Gujarat is priceless and can never be bought, Congress vice president Rahul Gandhi said today, a day after Patidar leader Narendra Patel claimed in Ahmedabad that he was offered Rs 1 crore to join the BJP.

The activist of the Hardik Patel-led Patidar Anamat Andolan Samiti (PAAS) made his claim at a press conference last evening, hours after he announced that he was joining the BJP.

The BJP has rubbished Narendra Patel's charges and said it was a "drama" staged at the behest of the Congress.

"All these allegations are false. It was a drama (enacted) by Narendra Patel at the behest of Congress," Gujarat BJP spokesperson Bharat Pandya said.