'Guard Our Tradition Of Tolerance'

Full text of President Narayanan's passionate advocacy of minority rights and the suffering "silent majority" with extensive quotations from Nehru and Vivekananda and the need for Hindus "to speak out in the traditional spirit of the Hindu religion". 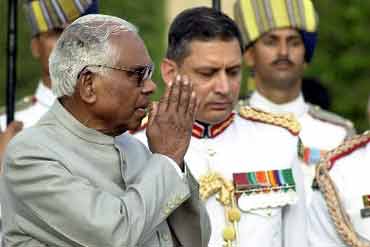 On the eve of stepping down from office, my heart is filled with emotions of gratitude and thanks to the people of India, their elected representatives, and to the political parties for the trust and confidence they reposed in me and the kindness and affection they bestowed upon me during the last five years.

And I extend to Dr. Abdul Kalam my heartiest congratulations and warm welcome, as the next President of India, and, wish him success and fulfilment in this highest office of the State. I applaud him as a distinguished scientist and technologist and as a scholar and a humanist.

I had the privilege of being the President during the 50th anniversary of our Republic and to participate in the celebrations of that historic anniversary and also to see India enter the 21st century. It was exciting for me to see our country stepping into the new century as the largest and most vibrant democracy in the world, as an economic and technological power of significance, and above all, as a country of one billion people that has achieved self sufficiency in food for the first time in its modern history.

To-day the youth of India are awake and they have brought India to the cutting edge of technology making it possible to be a developed nation in the near future. Swami Vivekananda used to say "give me a dozen young people dedicated to the service of the nation and I shall transform the world".

To-day we have thousands of enthusiastic young people in our country who are awaiting a call from the elders, and examples set by the older generation for service to the people and the nation. It is not an exaggeration to say that we of the older generation has failed to set examples and role models to our youth for social action in the service of the nation. If only we could release and set in motion the bottled up potential and energy of our youth we can change India, if not change the world.

Gandhiji has once remarked that true democracy is what promotes the welfare of the people. We are proud of our 200 odd million people who are educated and belong to the entrepreneurial and the more well off classes. But we should not forget that this educated well off class is surrounded and almost besieged by the majority of our people who are poor, ill-fed and illiterate.

The economic reforms through liberalization and globalization should not ignore this weaker majority – the scheduled castes and scheduled tribes, the women who toil day and night and make life worth living in our homes. The provisions we have already made in our social and economic policies and programmes must be strengthened, expanded and implemented with sincerity in order to deal successfully with the condition of all the marginalized sections of our society.

Above all, we should safeguard the unity of India and the democratic order that has elicited a sense of wonder and admiration from the world. At the base of our unity is our tradition of tolerance, religious tolerance, and communal and social amity. In this context I should like to recall the words of Swami Vivekananda at the Parliament of Religions in America. He said he was proud that he came from India, the wonderful land of tolerance, where the Hindus built mosques for the Muslims, and Churches for the Christians.

Indeed Vivekananda entertained a vision of India having a Vedantic brain, an Islamic body and a Christian heart. It was in the same spirit that Mahatma Gandhi declared that "I do not expect the India of my dream to develop one religion i.e. wholly Hindu, wholly Christian or wholly Muslim, but I want it to be wholly tolerant with its religions working side by side with one another".

Combining the moral and pragmatic aspects of this tolerance Prime Minister Jawaharlal Nehru wrote to the Chief Ministers of India during the dark days of 1947 and I wish to quote excerpts from this letter.

"We have a Muslim minority who are so large in numbers that they cannot, even if they want to, go anywhere else. They have got to live in India. That is a basic fact about which there can be no argument. Whatever the provocation from Pakistan and whatever the indignities and horrors inflicted on non-Muslims there, we have got to deal with this minority in a civilized manner. We must give them security and the rights of citizens in a democratic State. If we fail to do so, we shall have a festering sore which will eventually poison the whole body politic and probably destroy it. Moreover, we are now on a severe trial in the international forum. I have it on the authority of our delegates to the United Nations that the friendliness towards India which existed before the recent tragedy, has changed and we are looked upon with distrust, and almost with a certain degree of contempt. We cannot afford to ignore this feeling..... And pure self-interest, apart from moral considerations, demands that world opinion should be on our side in this matter of treatment of minorities."

His words are true and relevant even to-day and we can ignore these words of wisdom at our risk. It is important for us to-day to introspect and realize that what makes India’s unity and democracy credible and enduring is this precious tradition of tolerance.

My dear fellow citizens, I was born and brought up in a village called Uzhavoor in Kerala among all religionists. I recall how people of different religions lived together in that village without any sort of tension among them and how the upper class Hindus in that village as well as well-to-do Christians encouraged and helped me in my early studies. Later in life I had the opportunity to fight in general elections from a constituency called Ottapalam well known for important upper caste Hindu families. I recall how they all came out to canvass for me in the elections with great enthusiasm.

From this constituency where there were considerable number of Muslims and Christians also, it was my good fortune to get elected to Lok Sabha for three consecutive terms with a sizeable majority. At Ottapalam I experienced the essential goodness of our people, their capacity to forget all communal, religious and social divisions of our society, when an occasion was presented to them. It is up to our social and political leaders to present the people with such occasions, especially to-day when the poison of communalism has caused so much violence and hatred in some parts of our country. We need the Hindus, who form the majority, to speak out in the traditional spirit of the Hindu religion.

My parting appeal to you, dear citizens of this proud and tolerant Republic of India, is to guard our tradition of tolerance, for, that is the soul of our culture and civilization, that is the spirit of our Constitution, and that is also the secret of the successful working of our democracy and the secret of the coherence of this vast country as a united nation. May I thank you all again when I step down from the elevated position of the First Citizen, to be a citizen among other citizens of this great Republic.

We Oppose It, But Why You?