It was a farce from the beginning till the very end, but finally Shibu Soren was persuaded to resign and Arjun Munda got that much coveted letter appointing him Jharkhand Chief Minister, which was rightly his to begin with. 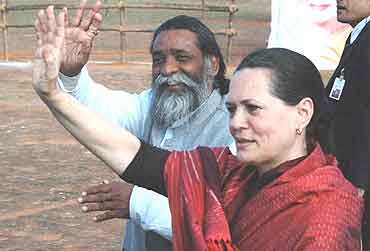 Finally, after a political drama that began soon after the Jharkhand assembly results, it was an exhausting last day of farce, hopefully, that saw the JMM-led UPA's controversially appointed Chief Minister Shibu Soren finally bowing out of office after failing to prove his majority in the state assembly as directed by the Supreme Court, following which BJP leader Arjun Munda was appointed to the post.

But there were some last minute hitches too. The bluff and bluster lasted till the very late night when Shibu Soren refused to give up and put up a last-minute resistance of sorts before the Governor Sibtey Razi, who called him to quit, after belated intervention by the center.

Soren, who was sworn in as Chief Minister on March 9, refused to tender his resignation during the hour-long meeting at the Raj Bhawan this evening. He went home without having tendered his resignation and it reportedly took quite some "persuasion" by Congress leaders before he announced his resignation at a press conference close to midnight, the deadline set by the Supreme Court for completing the trial of strength.

Almost half past midnight, Munda, who had been the Chief Minister for close to two years before the recent elections, met the governor who finally gave him that much sought after appointment letter which should have been his due to start with. Munda will be sworn as the Chief Minister tomorrow, a Raj Bhawan communique said, and would be given time till March 21 to prove his majority in the house.

The day started with high drama and an attempt at damage control on Lok Sabha Speaker Somnath Chatterjee's controversial demand for making a presidential reference. It was discussed at at a high-level meeting of Congress leaders, including Sonia Gandhi and senior ministers, at the Prime Minister's residence and they decided that the government would choose not to go on a collision course with the Supreme Court. Law minister H R Bhardwaj went on record to say that
"it was the duty of the central and state governments to abide by whatever order was given by the Supreme Court".

But throughout the day it seemed as if we were headed for a constitutional confrontation never witnessed before. Till pretty late in the evening when, finally, the centre moved, belatedly as ever. Shortly before Shibu Soren's meeting with the governor, union home minister Shivraj Patil finally appeared before reporters after after a meeting of the Cabinet Committee on Political Affairs to say that " constitutional propriety demanded that Soren should resign" in view of the failure to prove his majority and expeditious efforts should be made to install an alternative government which should prove its majority in 3-4 days. He also saw it necessary to add that the Prime Minister and the government were determined to uphold the constitution in its letter and spirit.

Throughout the day, the proceedings in the Jharkhand assembly were adjourned five times when UPA members, knowing that they did not have the numbers, stalled the business of the house, questioning the competence of the Protem Speaker Pradip Kumar Blamuchu to conduct a trial of strength. They wanted him to strictly go by the schedule of events announced earlier by Governor Sibtey Razi before the Supreme Court directive, under which the protem speaker was only to preside over oath taking by members and Speaker's election.

The Protem Speaker, who is a Congress MLA, pleaded helplessness, and decided to adjourn the house till Tuesday. But that was not all. He went further and taking a cue provided by the Lok Sabha Speaker, suggested that the President should seek the Supreme Court's opinion on its interim order advancing the trial of strength.He also said that no pro-tem speaker had ever conducted a trial of strength in a newly formed assembly. Despite all the brave talk by the Congress in Delhi, they had not even been able to reign in their own MLA it would seem, who was clearly flouting the Supreme Court order.

The NDA's flock of 41 in the 81-member House remained intact throughout the day. They wanted him . "We sat like good boys," Arjun Munda was to smilingly say later, knowing that it was all being videographed as per the Supreme Court's order. The UPA members, on the other hand, displayed clippings of a newspaper to claim that the independent MLAs had been kidnapped by the NDA and were being forced to support the opposition combine.

Finally, it was left to the independent MLAs to address the press themselves. Independent MLA Enos Ekka, subject of much discussion and allegations recently, told the reporters: "I have several times stated that I am with the NDA. Even today I informed the house that I am an independent MLA and support the NDA" .

"No one has confined us...You can see we have come before you," he asserted in reply to a question on UPA's claim that he and two other MLAs had been 'kidnapped' by NDA.

AJSU president and independent Sudesh Mahto said UPA's claim of kidnapping was "rubbish as we were in the House and we are here now." Mahato along with Ekka, Madhu Kora, Hari Narain Rai and Chandra Prakash Choudhury, asserted that there was no pressure on them from any quarter.

But by then the assembly had been adjourned till March 15. And it was after that, having failed to exercise control over its allies and its own MLAs, the harried and "upset" Prime Minister had to have hurried "consultations" with leaders of Left parties, arguing that the constitutional deadlock had been created by the assembly's failure to hold the floor test and a way out should be found to implement the apex court directive. The PM also held "telephonic consultations" with RJD leader Lalu Prasad and DMK leader M Karunanidhi. The UPA constituents agreed with the Prime Minister that the damage should be undone. And thus followed the CCPA and then came Patil's statement to reporters which resulted in the long awaited change in Ranchi.

Is this finally the end of this farce? Watch this space.

'A Total Fraud On The Constitution'