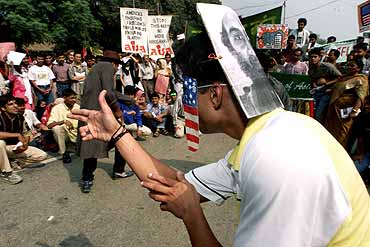 The conflicts which were expressed in the tragedy of September 11 are being looked at through lenses coloured by mono-cultures - the monoculture of "a universal western civilization" or the monoculture of an equally universal Islamic terrorism. In the Samuel Huntington paradigm, this is leading to the clash of civilizations. In the Francis Fukuyama paradigm, we are seeing the end of history -- the ultimate conquest of the west over the rest.

Yet both Huntington and Fukuyama are constructing fictitious worlds -- removed from our diverse histories, and our plural pains.

Firstly, there is no such thing as a western civilisation. The dominant West has extinguished its own diverse cultures -- of women in the witch hunts, of native Americans in the genocide of colonisation. And Seattle, Washington, Gothenburg, Genoa were voices of other cultures, other visions from within the West which are being attempted to be silenced, including with bullets. Remember Gandhi's response when asked what he thought of Western civilization. "It would be a good idea", he said.

Just as dominant western culture is not universal, terrorism is not necessarily linked to Islam.

In India we experienced it as Sikh terrorism in Punjab during the 1980s. The farm crisis fuelled violent Sikh nationalism as unemployed and angry youth took guns exported by the same global powers that had destroyed Indian agriculture and who looked on India as a market for their overpriced non-essential often hazardous products and technologies.

The Oklahoma bombing was a result of the rise of Christian militias in the mid west. And terrorism within the U.S like that in Punjab was also linked to the farm crisis, the growing dispossession of American family farmers which made them accept the new gospel of violence and hatred. As Joel Dyer says in Harvest of Rage: Why Oklahoma City is only the Beginning":

America's innocence lay in the rubble of the Murrah building as surely as the crumpled bodies of the victims. The deadly Oklahoma City bomb was just the first shot in the collective suicide of the nation. Some Americans -- some of them our neighbors-- have declared war on the powers that be, and those of us who stand unknowingly in between these warring factions are paying the price. And we will continue to pay the price -- one building, one pipe bomb, one burned-down church at a time -- until we come to understand, first, that the nation is holding a loaded gun to its head and, second, why so many among us are struggling to pull the trigger.

Terrorism has no religion - it is not restricted to any region. It is now global - and terrorisms everywhere share the culture of hate and hopelessness, victimhood and violence. In a discussion of September 11 at the Forum 2000 in Prague, Nobel Prize Winner Elie Wiesel asked, "What happened? Why did it happen? Could it "have been avoided?" In other words, what is the ecology of terrorism.

Over the past two decades, I have witnessed conflicts over development and conflicts over natural resources, mutate into communal conflicts, and into extremism and terrorism. My book "Violence of the Green Revolution" was an attempt to understand the ecology of terrorism. The lessons I have drawn from the growing but diverse expressions of fundamentalism and terrorism are the following:

Globalisation is contributing to the Talibanisation of the world. Economic globalisation is fuelling economic insecurity, eroding cultural diversity and identity, and assaulting political freedoms of citizens.

The survival of people and of democracy needs a simultaneous response to the double fascism of globalisation -- the economic fascism that destroys peoples lives, economic freedoms and economic security and the fascism of fundamentalism that feeds off peoples' economic insecurities and fears.

The "war against terrorism" will not contain terrorism because it does not address the roots of terrorism. It is in fact creating a chain reaction of violence and spreading the virus of hate. Just as pests multiply and grow resistant with pesticides, the war effort will increase the numbers and resilience of terrorists. Pests can only be controlled by making plants resilient and maintaining pest-predator balance in ecosystems.

The ecology of terror shows us the path to peace. Peace lies in nourishing democracy and nurturing diversity.

Democracy is not a shell but the life blood of free society. It is not merely an electoral ritual but the power of people to shape there destiny, and influence their lives, policies and conditions which destroy democratic control of people over how their food is produced and distributed, what health and education systems they have, how their natural resources managed, owned and utilised are.

Terrorism is born from the death of democracy and can only be responded to by giving the power back to people. This is why the anti-globalisation movement is an anti-terrorist movement. It is giving peace and democracy a chance. If it is stifled by the brute force of militaries and global markets, our worlds will disintegrate into vicious cycles of violence and chaos. And no one will be immune.

The Empire Wants War, Not Justice