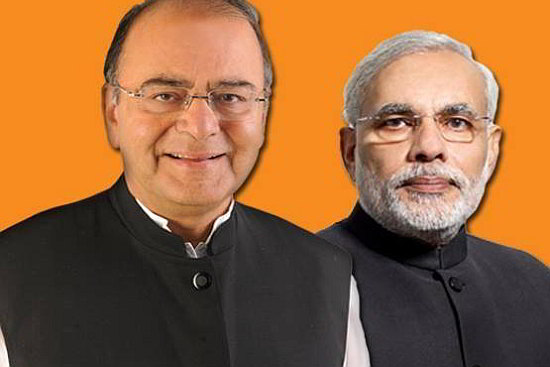 Recently, Mr Arun Jaitley wrote a blog on several issues, in which he has also accused Rahul Gandhi of breaching the unstated code of Indian politics by making Narendra Modi's marriage a political issue.

Mr Jaitley had, in the piece, lauded Mr Modi for his disclosures on his marriage saying this fact is sufficiently in public domain that Narendra Modi and his "wife" were made to solemnise a marriage as young children and they never lived together. He then makes no attempt to answer why Mr Modi did not acknowledge his wife for all the four elections he contested before 2014.

Mr Jaitley however praises him by saying "Modi dedicated himself to spiritual and political activities. The lady lived with her parents, and worked as school teacher. By all accounts, the comments of lady have been extremely dignified."

The BJP usually invokes Lord Ram to power their coming to power. In the Ramayan is a character who is married to Mandodari, a pativrata, but is himself a debauch. He kidnaps a woman against her will and keeps her captive.

In the present case is a man who conveniently walks out of his marriage in the relentless pursuit of political power. A man who uses personages like Keshubhai Patel, Kanshiram Rana and L.K. Advani as stepping stones to further his political mission and then conveniently kicks them away. His alleged dalliances with a senior minister was spoken about in hushed tones, until the minister’s own husband issued a public statement that Mr Modi decides the menu in the minister’s home.

An IAS Officer Pradeep Sharma has made startlingly serious allegations about Mr Modi that a young architect from Bangalore whom Mr Modi was said to be infatuated by was stalked and snooped upon by the Anti-Terror Squad (ATS). The lady’s movements including those of her trips to ease herself in the ladies room were reported to two persons, one of whom was the home minister of the state (kaali daaRii) and the other—Mr Modi (safed daaRii).

If Mr Modi had consummated the marriage with Jashodaben in 1968, he’d have had a child at least 20 years older than Madhuri, the assumed name given to the 25 year architect whom Mr Modi was alleged to be courting through a combination of illegal information, rewards, favours and threats including to her and members of her family.

Ramakrishna Hegde, Chief Minister of Karnataka had to demit office for tapping the phones of political rivals.

Contrast this with Narendra Modi who has survived allegations of snooping on 90,000 political rivals besides a woman he was alleged to be arduously pursuing. This is in addition to allegations of staging 17 encounter deaths between 2002-2007 of ‘ISI operatives’ (encounter deaths strangely ceased in 2007, the day DIGP Vanzara was arrested). Mr Modi’s personal involvement in the pogrom of 2002 have been graphically exposed separately by R.B. Sreekumar, former DGP and by a sting operation by Ashish Khetan. Mr Modi, who still survives as Chief Minister, despite each one of these issues having the potential of unseating him is the proverbial cat with nine lives.

Mr Jaitley further goes on to state that "Indian politics has an unstated code of conduct. Ordinarily, we don't drag families and ladies into controversy. Rahul Gandhi is guilty of breaching that code."

So Mr Jaitley, who has brought up the issue of a completely private individual Mr Robert Vadra? The sum total of allegations against Mr Vadra revolve around his business dealings with another private entity DLF.

The BJP has raised this issue despite knowing fully that DLF has handed out Rs 2,500 crore worth of advances to various vendors in return for securing lands that has been within their sight. For DLF, contiguity to lands already existing under their ownership matters foremost, for it is less expensive to create islands of prosperity rather than a cluster of prosperity hither and thither. Robert Vadra was only one of the several investors who received some amount from this huge pile of reserves that had been set aside by DLF. If his investments of Rs 50 lakh in 2007 leapfrogged to a figure of Rs 300 crore, it is not astounding primarily because several hundreds of other investors in this sector have witnessed such windfalls, owing entirely to the vagaries inherent to the sector.

Contrast this: Robert Vadra buys private land and sells to a private coloniser (DLF) who have set aside a corpus of Rs. 2500 crore to fund acquisitions from 3000 other persons, besides Mr Vadra.

Mr Modi, on the other hand allots 44 Crore sq. ft of governmental land to Adani at rates ranging from Re. 1 to Rs. 33 per sq yard who further sub-leases the same to other companies for between Rs. 800 to Rs. 10,000 per sq yard.

It is then Mr Modi who carries out a stinging diatribe against Mr Vadra!

Mr Jaitley further adds that "He (Rahul Gandhi) must remember that the disturbed matrimonial relationship of a former Indian Prime Minister was never a political issue. It is not clear if Mr Jaitley was referring to Atal Behari Vajpayee when he said this.

Jaitley then questioned why Rahul Gandhi has not been able to click as a leader acceptable to the country and said all Congressmen must reflect upon this. "Rahul's communication skills are at best modest. Let alone the average common citizen, his ability to inspire even the Congress cadre is questionable. His understanding of economy is a suspect. But latest desperation that he has displayed makes one wonder whether his level of discourse can at all be prime ministerial," he said.

As a young person, I can safely tell Mr Jaitley that I have met scores of young men and women who find Mr Modi and his speeches repulsive. They have a nasal twang with too many pauses in an attempt to cultivate the manner of Mr Vajpayee’s speech. More than the style and tenor, the content is downright repetitive, low class and pessimistic.

Mr Jaitley said the requirement of filing an affidavit with the nomination form was directed by the Supreme Court as a part of the voter's right to know facts even about the private lives of their candidates.

"Since the marriage was never acted upon in accordance with the requirements of the then law, Narendra Modi was earlier leaving the column regarding the name and assets of his spouse blank," he said.

The law however is that the wife may be of any age—minor or major. ‘Wife’ for the purposes of Section 125 means a legally married woman. The legality of the marriage would be governed by the personal laws applicable to the parties. If the fact of legally valid marriage is disputed, the applicant will have to prove marriage. A marriage solemnized by exchange of garlands was held invalid.

According to Section 125(1)(b) of the Code of Criminal Procedure, if any person having sufficient means neglects or refuses to maintain his legitimate or illegitimate minor child, whether married or not, unable to maintain itself or as per Section 125(1)(c) of the Code, his legitimate or illegitimate child (not being a married daughter) who has attained majority, where such child is, by reason of any physical or mental abnormality or injury unable to maintain itself, a Magistrate of the first class may, upon proof of such neglect or refusal, order such person to make a monthly allowance for the maintenance of such child, at such monthly rate, as such Magistrate thinks fit, and to pay the same to such person as the Magistrate may from time to time direct.

However, the Magistrate may order the father of a minor female child referred to in Section 125(1)(b) to make such allowance, until she attains her majority, if the Magistrate is satisfied that the husband of such minor female child, if married, is not possessed of sufficient means. Here ‘minor’ means a person who, under the provisions of the Indian Majority Act, 1875 is deemed not to have attained his majority.

The word ‘Child’ is not defined in the Code. It means a male or female person who has not reached full age, i.e., 18 years as prescribed by the Indian Majority Act, 1875 and who is incompetent to enter into any contract or to enforce any claim under the law.

Mr Jaitley said the requirement of filing an affidavit with the nomination form was directed by the Supreme Court as a part of the voter's right to know facts even about the private lives of their candidates. "Since the marriage was never acted upon in accordance with the requirements of the then law, Narendra Modi was earlier leaving the column regarding the name and assets of his spouse blank," he said.

Mr Jaitley does not however explain that this requirement h as existed even since the 2002 Judgment of the Supreme Court of India, how Mr Modi will overcome the legal hurdles which arise as a consequence of his present disclosure. The BJP is today a troika of Rajnath Singh, Arun Jaitley and Narendra Modi. Many people feel that if not Mr Modi one of the two others will be the natural claimants to the prime ministerial position. Is this Mr Jaitley’s manner of ensuring that the top job becomes his by advising Mr Modi to now acknowledge a woman he has abandoned without mercy nearly half a century ago?!

Brijesh Kalappa, whose twitter profile describes him as "Activist, Attorney and Aficionado of the middle path. Will work over-time to achieve the India of the Mahatma's dreams", is media panelist, All India Congress Committee (AICC)