Sorry for the predictable puns, but is it the General's Election or the General Election? Same difference. Sustainable Democracy will be Democracy In Olive Greens (or Khaki?), thinks an old Pakistan watcher. 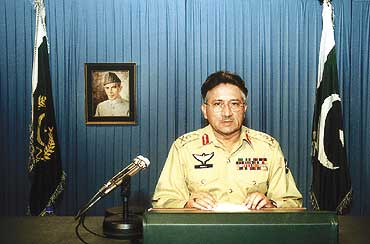 Pakistan has had four military dictators (if one omits Gen.Iskander Mirza) in its history, but none had sought to distort the entire constitutional and legal process in the country in such an outrageous manner as Gen.Pervez Musharraf has done with his constitutional amendments and  administrative orders without constitutional or legal sanction. None had misused the military-intelligence establishment  in such a blatant manner to manipulate the electoral process as he has been doing to influence the forthcoming elections to the National Assembly on October 10, 2002.

Having decided that Pakistan needed him as the President for the next five years and got his decision "endorsed by the people" in a referendum widely perceived as rigged by the Inter-Services Intelligence (ISI) in April last, he has been trying, through the so-called elections on October 10, 2002, to ensure the "election" of a hotch-potch  National Assembly in which the two mainstream political parties -- the Pakistan People's Party contesting under a slightly different name (PPP Parliamentarians)  and the Pakistan Muslim League (PML) of Nawaz Sharif -- would be marginalised and the political balance would remain in the hands of a group of politicians known for their mediocrity, lack of popular political base and malleability by the military-intelligence establishment.

The "elections" are supposed to culminate in the coming to office of a Prime Minister, who, according to the machinations of  Musharraf, would exercise all residual executive powers  not retained by Musharraf such as those relating to general administration, the economic management and the social sector. All powers relating to the military-intelligence establishment and national security management including relations with India and other important foreign powers, Pakistan's contribution to the international war against terrorism, the nuclear deterrent etc  would continue to be exercised by the President, with the role of the "elected" Prime Minister reduced to agreeing with the decisions of the military dictator and explaining them to the National Assembly and getting its approval.

All past military dictators of Pakistan had got an act of indemnity passed by the newly-elected National Assembly in order to spare them from all prosecution for their acts of illegal commission and omission during their dictatorial rule.  Not wanting to take any chance, Musharraf has by an order issued under his signature  pardoned himself and all his colleagues and banned any legal action against them after a National Assembly has been "duly elected".

It is doubtful whether  Musharraf would have been able to indulge in such a rape of democracy, which is shocking even from Pakistan's standards, if he had not had the blessings of the US and if Nawaz Sharif and Benazir Bhutto had not discredited themselves in the eyes of the people  because of  their corrupt and arbitrary ways of functioning when they held office as the duly elected Prime Minister.

However, despite the lingering bad taste in the mouths of sections of the public over the way Nawaz and Benazir misruled the country, Musharraf has not succeeded in his efforts to reduce them to irrelevance by excluding them from the political process through orders of questionable fairness and validity which would not have stood the test of judicial scrutiny in any democratic  country.  But, in Pakistan, the judiciary has always been malleable and has once again lent itself to serve the narrow  interests of the military-intelligence establishment at the cost of the national interest.

Even if there is a modicum of fairness in the elections under international pressure, the PPP is certain to sweep the rural areas of Sindh where its, and Benazir's, popularity remains undiminished and will do well, though not so well as in the rural areas of Sindh, in the Seraiki areas of southern Punjab. Nawaz's PML would do well in central and northern Punjab and Altaf Hussain's Muttahida Qaumi Movement (MQM) in Karachi, Hyderabad and Sukkur. The results would be mixed in the North-West Frontier Province (NWFP) and Balochistan.

It remains to be seen whether the international community would ensure such a modicum of fairness.  In the light of the USA's narrow interest in not contributing to a weakening of Musharraf's position, it is doubtful whether it would.

Whatever be the outcome of the elections, it would not be the beginning of what Musharraf calls sustainable democracy. It would be the beginning of democracy in olive green, continued military rule behind a civilian facade. Since Musharraf is a Mohajir, the Prime Minster is likely to be from outside Sindh.  It is  believed by many analysts  in Pakistan that Musharraf's preference as his compliant Prime Minister would be either Mian Mohammad Azhar, of the anti-Nawz faction of the PML called PML--Qaide Azam, , Farooq Leghari, former President, of the Millat Party, or Imran Khan, of the Tehrik Insaf Party.

While Mian is a Punjabi and Imran Khan a Pathan, Leghari is of mixed parentage---Seraiki father and Balochi mother. Musharraf's anxiety not to further rub the Islamic fundamentalists on the wrong side, at a time when they are already angry over his pro-US policy,  might come in the way of his choosing Imran Khan, because of his marriage to a foreign woman and his image as a playboy. Leghari, a retired civil servant who entered politics through the PPP, could turn out to be a good administrator, but he has a network of friendships among the Punjabi officers of the Army, which might make Musharraf nervous about him. Mian Azhar has all the qualities valued by Musharraf in a political leader -- mediocrity, a supine attitude to the military-intelligence establishment and lack of popularity.

The late Zia-ul-Haq thought that Mohammad Khan Junejo of the PML from Sindh had similar qualities which would make him a compliant Prime Minister and made him the Prime Minister after the "elections" of 1985. Junejo grew up in office and turned from a compliant to a defiant Prime Minister, resulting in his dismissal by Zia in 1988.  A similar transformation cannot be ruled out even in the case of any other civilian political leader -- even Azhar --.but, that would be a long way off.

Whoever be the Prime Minister, whatever be the post--"election" combination in the National Assembly, whether the new Assembly is one of Musharraf's henchmen or of his detractors from the PPP and PML (pro-Nawaz), Musharraf and the military-intelligence establishment would continue to call the shots.  It would be unwise for India to count on any qualitative change in the Army's hostility towards India and in its policy of using pan-Islamic terrorism against India.

India should not be under any illusion that the coming into office once again  of civilian political leaders would mark a dilution in the Pakistani Army's hostility.  The US pressure on India to make a gesture towards Musharraf by agreeing to a resumption of bilateral dialogue on all issues, including Kashmir, would increase.  New Delhi's response has to be based on a lucid calculation of India's national interests and not on the desirability of a quid pro quo to  the US in view of its support to the electoral process in J&K and its certification of the fairness of the elections there.

If such a quid pro quo to the US  is considered necessary for real politic reasons, India could consider any proposal for a resumption of the talks on nuclear confidence-building measures based on the agreements reached at Lahore in 1999, but should not relent in its opposition to any talks on the Kashmir issue unless and until Pakistan winds up its terrorist infrastructure directed against India.

The Other "Good War"