From Vienna To Jalandhar

Barely had the clash over Dera Sacha Sauda died down that an incident in Vienna sets off a violent reaction in Punjab and Haryana. Political parties step in to exploit the roused religious passions. 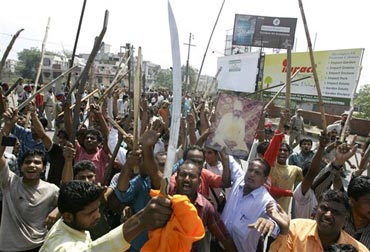 It’s not just a simple clash of Dalits and upper caste Jat Sikhs over religious identity which has triggered off the current violence in Punjab.

Though tension between the two sides has been on the rise for the last several years and has manifested itself on several occasions, the shootout which took place in Vienna on May 24, leading to the death of Sant Ramanand, head of Dera Sachkhand in Jalandhar is a little more than that.

For one, the Punjab Police which has activated its intelligence network keeping an eye on Sikh fundamentalists in India and abroad is unable to place the perpetrators of the crime.

Punjab DGP KK Attri announced today that out of the five assailants, three were lynched to death by the followers of the Dera immediately after they fired. He said that the assailants are believed to be Sikh fundamentalists but had nothing more to add.

At about the same time, chief of the Babbar Khalsa, (presently in Pakistan) Wadhawa Singh distanced himself from the incident by condemning the incident in a statement issued today.

Radical Sikh organizations based in Punjab are also betraying nervousness, fearing that the heat could turn on them. Few among them now are prepared to talk about their oft repeated opposition to ‘deras’ and the mode of worship which the deras of Punjab propagate.

For the record, the shootout in Vienna took place because some radical Sikhs had been objecting to the practice of Dera Sach Khand (as also other deras in Punjab) followers touching the feet of the head of the Dera while the Guru Granth sahib lay in the same room.

Conservative Sikhs, believing in the tenets of Sikhism as taught by the 10th Sikh Guru Gobind Singh, do not accept any living being as a Guru. For them the Sikh holy book is the ultimate Guru.

The Vienna incident was clearly not a spontaneous act of anger and was clearly designed to set off a reaction. The answers will come once it is clear who exactly planned and executed it.

The reaction in Punjab, though, has been swift and spontaneous. The Dera followers who are mainly from the Doab region of Punjab -- that is, the districts of Jalandhar, Kapurthala, Phagwara and Hoshiarpur -- unleashed violence which has left two persons dead and several injured.  Shops, buses and vehicles have been burnt and lakhs worth of public and private property destroyed.  The army and paramilitary forces are out and curfew has been imposed in four towns.

The Doaba area of Punjab is known for its huge migrant community and in the last two decades the Dalits of this region have become assertive on the strength of their dollar earnings. Most of the followers of the Dera Sach Khand in Ballan village in Jalandhar belong to the Dalit community.

Add to this a dose of politics in the form of the Assembly bye election to the Nurmahal constituency scheduled for May 28th. That is now likely to be postponed if things do not improve, because Nurmahal is in the heart of the Doab region.

The ruling Akali Dal did a curious thing to ingratiate itself with the Dalits. It announced a bandh to express solidarity with them and even the curfew that it imposed in the four towns is not being enforced with a firm hand.

So, even as the Prime Minister, Manmohan Singh appealed to the Punjabis to maintain peace and calm, the Akalis did their own bit to encourage the Dera followers.

Even if the present chaos is quelled with the help of the army, Dera politics have once again come to the forefront in Punjab. And political parties are unlikely to resist the temptation to play politics.

Never mind if the social and religious tensions that this is unleashing, threatens peace in Punjab once again.

We Are The World