From Title Contender To Also-Ran

Sliding from bad to worse, India capitulates once again and will now settle for minor placings 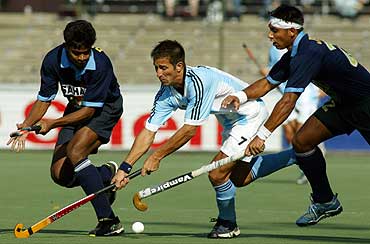 India slid from bad to worse as they crashed to a 2-4 defeat against Argentina and will now be left to fight for minor positions in the 25th Champions Trophy at Amstelveen today.

Argentina, playing only their second Champions Trophy event after their debut in 1987, capitalised fully on a tottering Indian defence to score their second win in three matches.

India suffered their third defeat in four games with only a win against an inexperienced Germany to show for their efforts, and are left with one match in hand, against Pakistan on Friday.

It was not as if the Indians played badly, rather, they allowed Argentina to score despite having more opportunities themselves.

India had more of the ball in the first-half much of which they controlled. But two lapses in the midfield saw them fall behind. In the first instance, Argentina was allowed to develop a left wing move that led to a penalty corner which Lombi converted in the 19th minute.

Five minutes later, Vila was left totally free at the top of the circle to receive a pass from Juan Eduardo Garreta and scored to give Argentina a 2-0 advantage.

The Indians did well to keep their nerves and following a nice rotation of the ball from wing to wing, centre-half Bimal Lakra let fly a long ball straight to Thakur who deflected in as the teams went into the break with Argentina leading 2-1.

The Indians had a couple of more scoring chances mid-way through the session, but the sharpness was missing at the finish and it allowed the Pan American winners to breathe a bit easier.

Soon after half time, Argentina came up with a typical counter-attack through the middle where the Indian mid-field had left acres of space. Tomas MacCormik began the run and put through Matias Paredes who, on advancing into the circle, flicked left for Almada to score from close.

The Indians had no respite as Lombi forced a penalty corner and went on to convert it as Argentina took a firm grip on the match.

However, the Indians were not quite finished yet as Dhillon pounced on a rebound after Dhanraj Pillay's attempt came off the goalkeeper, and found the boards with an angular hit.

Though India forced a couple of penalty corners in the dying minutes, they failed to convert any of them.

Earlier, a high-flying Australia destroyed Germany 6-1 with an awesome display of speed and power.

Thriving on lightning counter-attacks and set-piece play, the Australians left their opposition clueless scoring goals at will.

Two goals each by Michael McCann and Grant Schubert set the stage for the big Australian win while both Adam Commens and Aaron Hopkins sounded the board once to complete the German rout.

Alexander Sahmel put the world champions on the board with a penalty corner conversion.