The Cricket World Cup provided many highlights on and off the field over the 45 days and 48 matches. Ben Stokes set the tone for the tournament with a stunning catch in England’s opening game vs South Africa. 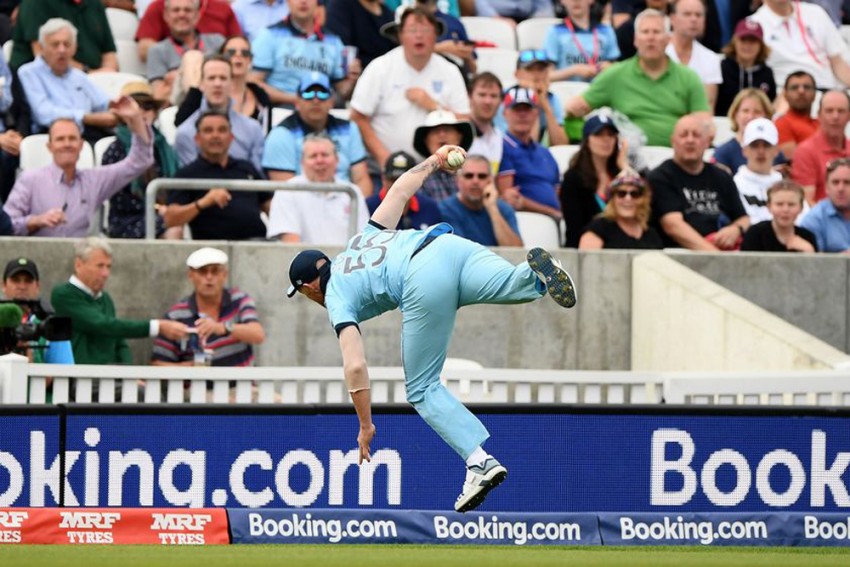 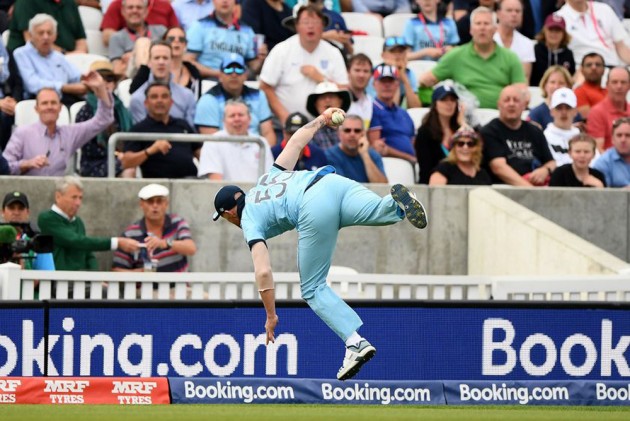 After 48 matches over 45 days it all came down to a Super Over but the ICC Men’s Cricket World Cup 2019 was about more than just that most dramatic of finales at Lord’s.

While England were eventually crowned champions for the first time in the Men’s Cricket World Cup, there were standout moments throughout the tournament, from Ben Stokes’ stunning catch to light the touch paper to that final run-out which decided the closest final of them all.

Nasser Hussain said what everyone else was thinking on that very first day at The Oval at the end of May: ‘You cannot do that, Ben Stokes.’

When you’re Stokes, you can, pulling off a simply sensational catch off the bowling of Adil Rashid to dismiss Andile Phehlukwayo. The Proteas all-rounder had smashed a slog sweep flat over midwicket and Stokes stunned everyone by racing back, flinging up his right arm and plucking the ball out of the air.

That set the tone for a tournament of brilliant catches, with Sheldon Cottrell’s efforts to dismiss Steve Smith possibly even better. Racing around the boundary he flung out his left arm, caught the ball at full stretch then, realising he was about to step out, lobbed it up before collecting once he had re-established himself in the field of play. The Cottrell Salute, one of the World Cup’s abiding images, followed, and rightly so.

Martin Guptill might have struggled with the bat, but he pulled off a screamer in the field to get that man Smith out again, reacting so quickly at short fine leg from a well-timed pull. The Australian batsman at least got some measure of revenge with a similarly impressive catch of Tom Latham in the reply in that group stage win over the Kiwis.

Guptill and Ravindra Jadeja played leading roles in the field in the knockout stages – more on that later – and even before he had made India’s XI in the tournament, Jadeja had made a huge impact.

The all-rounder was on as a substitute fielder against eventual champions England and made a spectacular diving catch to break a 160-run opening stand. He went onto underline his position as one of the best fielders in the world.

Fans flocked to the grounds in huge numbers over the course of the tournament, with perhaps no group game capturing the imagination more than India’s clash with Pakistan at Old Trafford.

More than 700,000 people applied for tickets for the encounter, which drew so much interest that a fanzone was set up in central Manchester for those who missed out on a ticket.

That match drew more views than any other on the ICC digital and social channels, with 120 million video views in all.

One Pakistan fan caught the imagination as he arrived at the ground on horseback, while on the field it was Rohit Sharma who stole the show with one of his five centuries at this tournament in an 89-run DLS victory.

A couple of weeks later, India were facing more Asian opposition in the shape of Bangladesh at Edgbaston, and it was there that one of the most moving images of the World Cup came.

Charulata Patel, an 87-year-old Indian fan, was in Birmingham for the encounter, cheering on the India team as she has done for so many different generations.

Virat Kohli and Rohit Sharma went to speak to her after the game, with Kohli then promising to find tickets for India’s Superfan in their remaining games.

Patel, who was spotted by the cameras blowing a vuvuzela to support the team, had been in attendance at Lord’s in 1983 when India first won the World Cup under the leadership of Kapil Dev.

The final gave us perhaps the most dramatic ending to a game of all, but this was a World Cup that had a host of great finishes along the way.

New Zealand were involved in a lot of them, from an early two-wicket victory over Bangladesh to Kane Williamson’s heroics to edge past South Africa at Edgbaston.
The tightest of all was the win over the West Indies though, Trent Boult catching Carlos Brathwaite as the all-rounder tried to hit the winning six after a stunning century had taken the Windies to the brink at Old Trafford.

Elsewhere, Afghanistan were on the wrong end of two tight finishes against India and Pakistan, losing by 11 runs and then three wickets in games that came right down to the wire.

And while England against Australia was not quite as close at Lord’s in the group stages, that was only thanks to arguably the ball of the tournament from Mitchell Starc. As we saw throughout, Stokes could win a game on his own, but even he had no answer for Starc’s perfect Yorker that derailed England’s chase of 286.

The eventual champions also fell short against Sri Lanka as Lasith Malinga rolled back the years in a low-scoring thriller in Leeds taking 4/43 in the standout performance of his final World Cup campaign.

Finally, a word also for Ikram Ali Khil, who broke Sachin Tendulkar’s record for the highest score by an 18-year-old at a World Cup with his 86 on the Little Master’s forming stomping ground of Headingley.

We were treated to some brilliant cricket over the course of the semi-finals, with India and New Zealand playing out a cracker in a rain-affected clash at Old Trafford before England laid down a marker against Australia in the second.

Jadeja had a remarkable all-round performance against the Black Caps, taking 1/34, scoring 77 and chipping in with two catches and a run-out. It was the run-out that really stood out, racing in from the boundary and removing Ross Taylor with a stunning direct hit. He caught Tom Latham next ball and almost won the game on his own.

It was not quite enough though, as Guptill had his own stunning run-out moment, a rocket of a throw removing MS Dhoni with a direct hit that effectively ended India’s counter-attack in an 18-run loss. Let us not forget Jimmy Neesham’s contribution either, a remarkable one-handed catch to remove Dinesh Karthik early in India’s chase.

England’s victory at Edgbaston was altogether more straightforward, but no less captivating as the Hollies Stand rocked at seeing their side cruise to an eight-wicket victory.

No moment encapsulated the explosive power of the England side than Jason Roy’s three successive sixes off the bowling of Smith, lifting his leg-spin higher and higher until the last went into the top tier of the ground.

That Lord’s encounter will live long in the memory, with the fielding on show quite remarkable from both teams.

Lockie Ferguson’s catch of Eoin Morgan will join Dev’s pouch of Viv Richards in 1983 in the pantheon of great finals catches.

But that was only part of the story. It may be forgotten because of what was to follow, but the two run-outs of Rashid and Mark Wood, thanks to perfect throws from Mitchell Santner and Neesham were incredible. Under the most extreme pressure, the pair was spot on with their throws from the boundary to force a Super Over.

And what of Jason Roy? In that Super Over, he misfielded one and then could not quite cut off a two the next ball as New Zealand looked set to win it. But when it mattered most, Roy was deadly throwing to Jos Buttler to run-out Guptill a yard short of his crease and clinch the World Cup for England.

It was only fitting that a World Cup full of brilliant fielding was decided by one final moment of magic.