Forty Panelists And An Actress

The high points were listening to writers like Nadeem Aslam, Amit Chaudhuri and Rana Dasgupta not only reading their work, but discussing the possibilities, the responsibilities and the limitations of being a writer 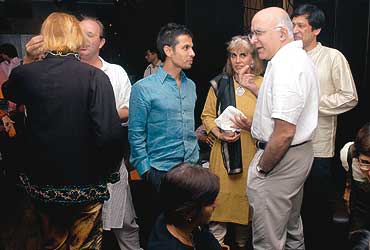 Billed as "bringing the world’s famous literary and media minds to Delhi’s doorstep", this British-Indian literary and media ‘extravaganza’ was an eclectic collection of the great and the good from the world of books. With over forty panelists, including actors, newspaper editors, reviewers, novelists, poets, politicians and a diplomat or two, the festival aimed to celebrate literature in all its variety.

The festival opened with William Dalrymple reading from his forthcoming book, The Last Mughal, which transported the audience back to the Delhi of Bahadur Shah Zafar. He was delightfully cross-examined by Rahul Bose who demonstrated, yet again, that he’s more than just a pretty face. 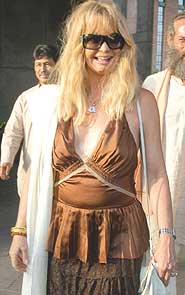 The other pretty face of the festival was Goldie Hawn who arrived in a halter-neck top and kitten heels, trailing acolytes and her personal guru, who beamed beatifically from beneath his beard. Explaining her love of the country, she turned on her 2000W smile: "It was like Kevin Costner said to me: ‘Wow, India’s really got ya by the belly button, huh?’"

In stark contrast to the cappuccino-light froth of Goldie, there were more serious sessions where pertinent contemporary issues were discussed. The heated discussion on ‘truth, fallibility and humanity’ centred largely around the US invasion of Iraq, with Clare Short taking on the question of ‘truth’ and the lies perpetrated by the US and British administrations. Even Shashi Tharoor’s diplomacy couldn’t smooth over that.

It was a shame that the programme was almost entirely panel sessions, and that audience participation was so limited. It was a shame also that the auditorium at the Habitat Centre was often less than half full. But, even Britain’s biggest festival at Hay-on-Wye started small, and now it is, according to Bill Clinton, ‘the Woodstock of the mind’. If his wife Hillary accepts the invitation to next year’s Kitab Festival—who knows what will result?

Pottering About
The discussion on ‘literary festivals’ was also lively, boosted by the presence of two directors of British literary festivals. Catherine Lockerbie, director of the Edinburgh festival, described the biggest surprise sell-out last year: a workshop on how to translate a Shakespearean sonnet; and Sarah LeFanu spoke of a young author who read out a story about a boy wizard called Harry to a tentful of 20 kids one summer many moons ago.

was a breath of fresh air, both for its delivery and its humour.

How do they do it?
But for me, the high points were listening to writers like Nadeem Aslam, Amit Chaudhuri and Rana Dasgupta not only reading their work, but discussing the possibilities, the responsibilities and the limitations of being a writer: of being simultaneously engaged in the private, usually solitary and intensely personal work of putting words on paper, and yet deeply engaged in the world around them, in all its complexity.