The high drama enacted as police descended on The Hindu's office without warrants following the Tamil Nadu Assembly sentencing the newspaper's publisher, top editors and senior journalists is a direct assault on the freedom of the press. 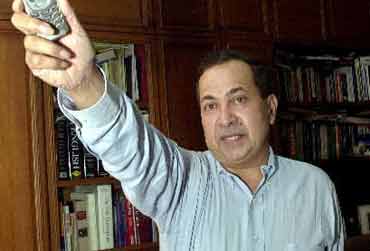 – N.Ram, editor-in-chief of The Hindu, when the police asked him for executive editor Malini Parthasarathy and editor N. Ravi’s whereabouts.

Let us be careful and declare at the outset that we have never used words and phrases such as "stinging abuse", "unrestrained attacks on the opposition", "fumed", "incensed", "chastisement" or "diatribe", singly or collectively, to describe Jayalalitha's speeches on single or different occasions.

Nor do we intend to use them now.  After all,. these, as The Hindu had pointed out in its impugned editorial, Rising Intolerance (which, you would note, we are taking great care not to reproduce), are the descriptive phrases, mostly about the Tamil Nadu chief minister's speeches, strung together from separate reports, that had been collectively referred to the Tamil Nadu Assembly's Privileges Committee.

And this editorial, too, in turn, got referred to the august committee for breach of privilege.

The august committee concluded breach of privilege and recommended seven days’ simple imprisonment to the five concerned employees of The Hindu. Jayalalitha quickly adopted the higher moral ground, and rose to say she was not pressing the punishment, and suggested that the House withdraw the punishment, which was accepted.

But on the second count, the august committee decided that this editorial (please note, not reproduced by us) because it endorsed earlier news reports and "attributed motive to the House as a whole and lowered its dignity" was a  "gross act of contempt and breach of privilege of the House".

Apart from the prison sentence, the Assembly-passes of all the reporters of the two dailies have also been suspended

Incidentally, in another privilege move, DMK legislator P. Ilamvazhuthi to 30 days’ simple imprisonment for "gross misconduct" in the last budget session, and he was arrested as he emerged from the Assembly.

That was not all.

More drama was to follow as within half and hour of the assembly order, about two dozen policemen descended on The Hindu's offices in Chennai, apparently in a typically inept manner without the necessary warrants. In any case, they definitely did not produce any documentation when confronted by N. Ram, the editor-in-chief of The Hindu, but returned soon thereafter in full glare of the media.

Despite that Supreme Court ruling that no woman should be arrested and kept in police custody between dawn and dusk, male police officers landed at the office of The Hindu to arrest Parthasarthy, and it was after 8:30 p.m. that they searched her room. They also searched her house in the night.

Indeed, ever since Jayalalitha came back to power in May 2001, incidents such as these – be it the drama involving DMK chief Karunanidhi’s midnight arrest, the arrest of MDMK leader Vaiko under POTA for his pro-LTTE posturing, the threatened arrest of union minister Kannappan, or the string of defamation cases against the press – seem to indicate a disturbing pattern of stifling any dissent and criticism by intimidation.

Fear is the key, it would seem.

Such have been the AIADMK government’s intimidation tactics that the media in Tamil Nadu seems effectively muzzled and most papers apparently prefer to play it safe instead of objectively reporting the political affairs in the state. There are over 100 defamation cases against newspapers and magazines, and of these The Hindu alone has 16 criminal defamation cases and one civil defamation suit.

During her previous term (1991-96), Jayalalitha had slapped 146 cases against the Tamil bi-weekly Nakkheeran alone. Nakkhheeran, reeling under a series of repressive measures this time as well, has had its editor R.R. Gopal in jail for 213 days. He was abducted by the police on April 11 for "possession of certain unauthorised arms". A notification issued in December 2002 described the "whole of the state of Tamil Nadu as notified area for the purpose of Section 4" of POTA, since apparently terrorists are having a field day in the state. However, the Madras High Court recently wondered why the unauthorised weapon in Gopal’s possession was described in various police records as ‘an unlicensed, country-made pistol’, ‘a country-made gun with two live muskets of 410’, and a ‘revolver’. Justice P. Shanmugam and justice T.V. Masilamani had observed:

So, the learned judges decided, "that the weapon could not have been in the possession of Mr. Gopal or recovered from him" and agreed to bail out Gopal. However, when the Tamil Nadu government moved the Supreme Court, bail was denied to Gopal.

The latest move to effect the arrest of top journalists at The Hindu is of a piece with the government’s attitude towards the media. Jayalalitha had made it known even before assuming power that she believed the Nakkheeran editor and the DMK chief had a role in the Rajkumar kidnap by brigand Veerappan. So Gopal’s arrest came as no surprise, given that three other Nakkheeran reporters had already been arrested.

However, this time around, The Hindu equally earned the government’s wrath because of its strident anti-establishment reporting when N. Ravi and Malini Parthasarathy called the shots. The reporter Radha Venkatesan who was on the secretariat beat—currently in the UK on a Chevening fellowship—embarrassed the government with several of her investigative reports.

Among the many speculative theories doing the rounds, it is believed in some circles that the changes effected at the highest editorial level in The Hindu a few months ahead of the newspaper’s 125-year celebrations in September 2003 were also to ensure a toning down of the criticism of the Jayalalitha government, or to at least appear conciliatory. The Hindu board of directors thought it wise to jettison Ravi and Malini, and bring back Ram after a gap of 14 years at the helm of the newspaper, goes this theory.

As further substantiation, it was cited that soon after taking charge, Ram admitted in an editorial (August 27) that the newspaper had indeed been editorialising even while reporting, and said he would buck the trend by emphasising what he identified as the core values of journalism – truth telling, freedom and independence, justice, humaneness, and contributing to the social good.

Much was also made of the Ram-Vajpayee bonhomie. On September 13, the occasion of 125 years of The Hindu, Ram said in the presence of prime minister Atal Behari Vajpayee, "We are determined to make this panchsheel work". To this Vajpayee responded saying the Indian media should take care of its responsibilities and professional ethics and "draw its own Lakshman rekha." Turning towards Ram, he corrected himself, "Or should I say Ram rekha?" But today, in Tamil Nadu, all rekhas are being crossed and redrawn.

But, speaking to Outlook on the eve of Jayalalitha’s two years in power, Ram, then editor of Frontline, had said:

"Article 19(2) permits the state to impose by law ‘reasonable restrictions’ under eight specified grounds. But the Jayalalitha government is trying to impose unreasonable restrictions on the media. This government is intolerant of any criticism. And in the case of privilege, we have been demanding that the legislature codify privilege since assemblies claim sky-high powers under this guise."

And since the arrest of an editor for breach of privilege is not unprecedented in Tamil Nadu, Outlook had reported that Ravi and Parthasarthy faced the prospect of jail, and this has proved ominously correct. In April 1987, during MGR’s chief ministership, S. Balasubramanian, editor of the weekly Ananda Vikatan, was sentenced to three months rigorous imprisonment since he "violated the privileges of the House" by publishing a cartoon in his magazine.

For now, The Hindu’s owner-editors Ravi and Parthasarthy, the printer-publisher Rangarajan and bureau chief Jayanth have gone underground. When K.P. Sunil, Illustrated Weekly of India’s Tamil Nadu correspondent, was issued a similar arrest warrant in 1992 under Jayalalitha's chief-ministership, he went underground for several weeks till the Supreme Court issued an interim injunction. Sunil, who today ironically heads Jaya TV, had invited the government’s displeasure for his article headlined ‘Tamil Nadu Assembly Fast Gaining Notoriety’, in the September the 21-27, 1991 issue of the magazine. The House found that the article violated its privilege.

A three-member Bench of the Supreme Court referred the issue of privilege to the Constitution Bench. The Constitution Bench referred the issue in 1997 to the Speaker who dropped the proceedings against Sunil. The DMK being in power at that time helped matters. Ram has spoken to the prime minister in this regard, but help and intervention, if any, can come only in the form of a Supreme Court interim injunction and subsequently a permanent one. But to prevent such occurrences in the future, what we need, as Ram has been reiterating, is to "codify privilege".

The AIADMK government has of course been no less kind to its political opponents. On August 15, the government tried to curtail the freedom of the opposition top brass. The City Central Crime Branch registered cases against former Chief Minister Karunanidhi; Tamil Nadu Congress Committee working president E.V.K.S. Ilangovan; CPI(M) state secretary N. Varadarajan and CPI state secretary R. Nallakannu, under Section 5 of TESMA, after receiving a complaint from the Secretary (Public). Section 5 says:

"Any person who instigates or incites other persons to take part in, otherwise acts in furtherance of a strike, which is illegal under this Act, shall, on conviction, be punished with imprisonment for a term which may extend to three years, or with a fine which may extend to Rs.5,000, or with both."

These leaders were accused of abetting the protracted government employees strike. On November 1, three months after the employees’ strike came to an end, the Chennai police handed over chargesheets against the four leaders, including Karunanidhi, to the Chennai Metropolitan Magistrate. So the day may not be far when everybody who matters in Tamil Nadu finds themselves in prison for a variety of reasons.

While referring to the Arundhati Roy contempt case in the Supreme Court, author Vikram Seth had said, "it would be a terrible pity if we were to feel muzzled. Activists or not, if we were to look over our shoulder every time we wrote...it would be a thousand pities."

And more than a thousand pities it is not to be able to even use words and phrases such as those that we had to avoid using in this article. For it is not a question of going to jail for 15 days, but the sheer harassment accompanying it all.

It was heartening therefore to hear Ram's answer when he was asked if the newspaper's journalists seek bail. "We have to get the resolution itself annulled," he replied. "It's a criminal misadventure, a foolish misadventure. It is going to backfire," he added.