'Explosion Of Self Esteem'

Chandan Mitra, Editor, The Pioneer, a consistent supporter of the bomb, feels that a furore both within the country and outside was caused perhaps because it was a BJP government which exploded the bomb. 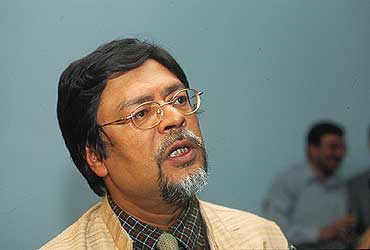 outlookindia.com
-0001-11-30T00:00:00+0553
Original Interview: August 1998
Please click here for exclusive excerpts  from Countdown. For more writings by and on Amitav Ghosh, please visit his website, amitavghosh.com, where this first appeared

CM: I’ve always believed consistently that India should weaponize and convert its potential energy into kinetic energy and to that extent I think that decision should have been taken long ago. It was left to a BJP government to do so and which may have perhaps caused such a furore both within the country and outside.

But I do believe that the NPT was discriminatory something that wanted to freeze the world between nuclear haves and have nots and India which has had a nuclear programme for many many years also has certain security requirements to look after -- particularly in the aftermath of the collapse of the Soviet Union and in this defenceless position it was an imperative to explode [the] bomb, declare itself a nuclear weapon state and thereafter whatever safeguards the nuclear weapon states have decided to adopt, India joins the league and agrees to adopt.

So in that sense I have been a consistent supporter of the bomb.

AG: But the price is too high in terms of sanctions.

CM: No, sanctions really didn’t bother us that much—the economic impact wouldn’t have been that dramatic. Because honestly I feel the US cannot really afford the sanctions—besides the hypocrisy of US policy in this regard. We see what is happening in China for instance that American business has wooed China back, so this is going to happen—We have to stand on our own feet in the economic arena. I think the sanctions are not going to be of any particular significance.

Luckily we are still broadly insulated from international economic trends and also the degree of foreign investment in India is still very limited. It's a blessing in disguise 10-15 years down the line India would have globalized fully and then it would have been that much more difficult to carry this out.

I again feel that Pokhran II has not come a day too late.

AG: I saw an article you wrote soon after the explosion, called an ‘Explosion of self esteem’ in that your argument there was not in strategic terms, but a kind of an internal address.

CM: I think it is a reality that the bomb is a currency of self-esteem. Now whether it should or should not be so is another matter—but all the major powers, the US, the erstwhile Soviet Union, China, France, Britain, are the countries which have made the bomb a currency of both domestic and international self-esteem.

AG: What about Japan and Germany ?

CM: Japan and Germany have specific reasons and under the clauses which bound them not to do so is a very different kind of scenario—

CM: But we must understand the Indian compulsion in a different context, that of 200 years of colonialism and also the kind of nation-building exercise that has had to be carried out in the last 50 years. And in this nation building exercise, I think the bomb is something that adds a tremendous meaning to national pride.

Given India’s size, its security concerns, its geo-strategic needs, plus the fact that the bomb is something that adds to a nation’s feelings of security, of self-esteem, of a sense of pride -- something which this country needs and which needs to be sometimes concretely expressed -- space exploration is one, the bomb is another -- these do have an impact on your pride in being an Indian.

AG: Can you enlarge on your point about colonialism—how do you think it becomes a factor in this—

CM: Two hundred years of colonialism—and the fact that India was never really a modern nation. We do not have really any degree of national pride or national cohesion in the same way as the British have, the French have, the Germans have, Americans have.

We have been told systematically that we are really not fit to rule ourselves—that there had to be degree of external authority -- that was the whole justification of colonialism—that our achievement, our worth, our talent has always been negated and all colonized people suffer from a feeling of inferiority this is common everywhere whether Africa or Asia and that's what colonialism did, it robbed people of their self-esteem and Gandhiji’s whole endeavour throughout the freedom movement was to build this sense of self-esteem saying so what if you don’t have a gun or lathi in your hand, you still have moral force.

Now, this was very important at that point when we were combatting British rule, but now that we are an independent country, 50 years down the line, we know that moral force alone is not enough to survive in this world or to get the esteem of the people. We tried it through the Non Aligned Movement but we have seen what has happened to it -- moral force does not count for very much in today’s world.

And when you are looking towards the end of the 20th century towards 21st century as to how you can instill national pride, overcome the feeling of inferiority which had been ingrained in your mind for 200 years, something like the bomb would seem could deal with the world better. So that you feel more completely yourself.

AG: Say, you and me. Do you think we carry this sense of inferiority within us?

CM: Yes and No—Even now, may be your experience has been different. Certainly when we go abroad, when we have to prove ourselves in international forum we have to shout out louder and also there is a very strong element of patronizing about an ex-colonial doing so well. I feel that ought not to be there we are as good as anybody else—the cream of Indian society is at par if not better in many ways to certain developed societies.

Nonetheless we have this problem of either being treated as inferiors or being patronized. This is a feeling that even the Chinese have suffered from and even continue to do.

So its not that we feel inferior, but somewhere when we interact in international forums, you know that you have to truly excel and draw attention—it won’t automatically come to you and this is quite a different sense of inferiority—not as it used to be in the colonial period. Where you were deemed not to be a District Magistrate, not fit to be in police, not fit to run your own affairs—now people are surprised that you are and are patronizing about it. And you have to shout louder in order to be heard. So the feeling is still very much there—

'The Indian Argument Was Opportunist'