Exclusive: ‘I Went To Kerala Event As State Guest, No Police Officer Warned Me About PFI,’ Says Hamid Ansari

Former Vice-President Ansari was criticized for attending an event allegedly organized by the women’s wing of PFI, which NIA suspects has terror links

Former Vice president Hamid Ansari has said he went to Kerala as a state guest and no police officer warned him against attending an event organized by a Delhi-based Institute along with the women’s wing of PFI, an organization that is suspected of having terror links.

The saffron group Vishwa Hindu Parishad (VHP) had lambasted him for attending the event.

Ansari told Outlook in a telephonic interview he was invited to the event by the Delhi-based Institute of Objective Studies, and no other organiser’s name was mentioned in the invitation. He was apparently ambushed by the organizers by not revealing that PFI’s unit was part of the event.

“I was invited by a Delhi-based body called Institute of Objective Studies; they had come to me saying they are organizing a study on status of women and role of women in making a humane society, with a focus, of course, on Muslim women,” said the former Vice-President.

“I was a state guest, which is the standard practice. When a former President or former Vice-President travels, the state government makes the necessary arrangements, starting with security. Senior police officials met me, but nobody told me not to go for it or there was a second sponsor. The controversy came as a great surprise to me,” he told Outlook.

Here is a copy of the invitation extended to Ansari by the Institute: 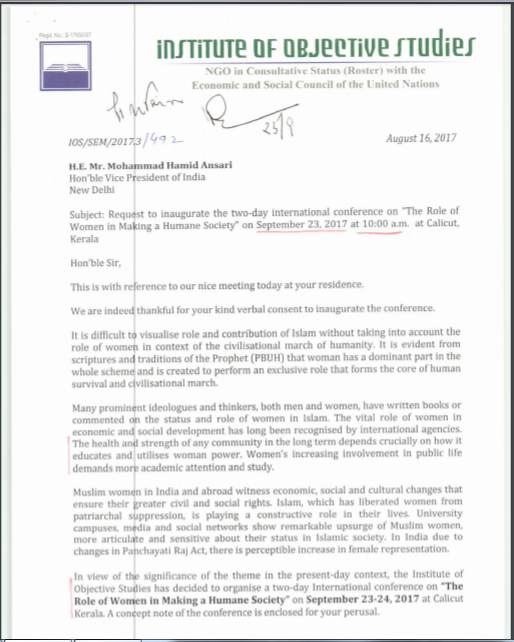 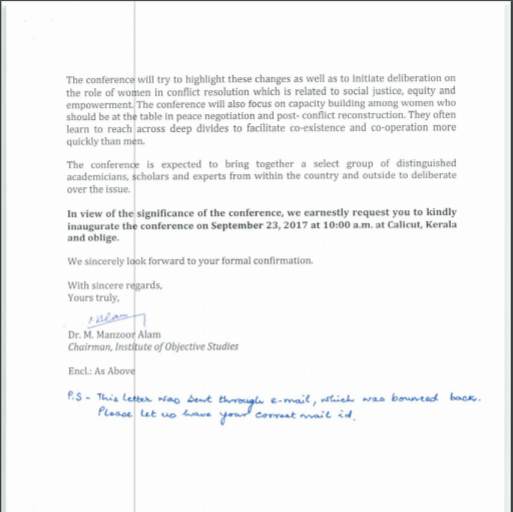 VHP Joint General Secretary Surendra Jain had said Ansari ‘stands exposed’ after attending the programme. "He was spreading dissatisfaction in the Muslim community even when he was holding the post of Vice President," Jain had said.

Earlier, the Calicut University had cancelled permission to hold the programme on the campus saying that the parent body of the Chair of Islamic Studies at the University objected to the women’s wing of PFI, which were initially not part of the event, later collaborating with it.

The National Investigation Agency (NIA) in a report to the Union Home Ministry had said the PFI has been involved in terror acts, including running terror camps and making bombs, and it was a fit case to be declared banned under the Unlawful Activities (Prevention) Act (UAPA).

But amid the hullaballoo over the organisers not being kosher, what got sidelined was the content of Ansari speech that blamed patriarchy in India for gender inequality.

The former deputy head of state also spoke at length on how women should overcome this ‘subordination.’

Here is Ansari’s speech in full:

Role of Women in Making a Humane Society

I thank Dr. Manzoor Alam saheb and the Institute of Objective Studies for inviting me to this conclave. Coming to the beautiful and historic city of Kozhikode is in itself a bonus.

At a first glance, today’s theme is self evident and in no need of commentary. Women constitute about half of humankind and should therefore share the same responsibilities as men.

The term ‘humane’ according to the dictionary is compassion or benevolence; a humane society is therefore one that avoids pain or suffering to fellow humans. Sociologists consider a society humane if it is motivated by the most desirable of human values. It implies a society dedicated to the principles of justice, equality and fraternity and one in which its members are recognized and respected as human beings without differentiations of religion, race, caste, sex or place of birth.

This, in relation to the female half of humankind, implies that women get justice, equality and fraternity in equal measure in the societies they live in.

Does this correspond to reality? Data published by UN Women shows that:

Some questions inevitably arise: Why has this come about? What lends legitimacy to it? Does this benefit women as a human species or the societies they live in? Can women inequality in most spheres of human activity place them to be equal beneficiaries of the benefits of a humane society? How can it be corrected?

These and related questions need to be answered, in this conference, and on all platforms where human progress is discussed. The Concept Note’s focus is on the status and role of women ‘in the Muslim world’. This includes Muslim women in India since demographic data shows that the world’s second largest Muslim population, amounting to around 189 million, resides in India.

I begin with the wider Indian scene. Jawaharlal Nehru had once said that ‘you can tell the condition of a nation by looking at the status of its women.’ The June 2015 Report of the High Level Committee on the Status of Women in India, headed by Professor Pam Rajput, was candid in its assessment and I would like to quote from its chapter on the ‘Socio-Cultural Landscape’:

‘Indian women are born into and raised in a socio-cultural environment that is highly discriminatory, patriarchal and hierarchal, in which economic, political, religious, social and cultural institutions are largely controlled by men. This environment has evolved over centuries through various social practices and institutions that are governed by patriarchy. Through a combination of family, caste, community and religion, among others, patriarchal values and ideas are constantly reinforced and legitimized’

It adds that ‘the first lesson in hierarchy, subordination and discrimination are learnt in the family’.

Thus for purposes of analysis, the question of status in society requires determination at three levels: as citizens, as women, and as women members of a specific religious grouping.

The rights of citizens are enshrined in our Constitution. It not only grants equality to women and prohibits discrimination but also recognizes their marginalization and empowers the State to adopt measures of positive discrimination in their favour. This has been reinforced by Supreme Court which has held that the equality clause does not speak of mere formal equality before law but embodies the concept of real and substantive equality which is an essential ingredient of social and economic justice.

As against this, the Gender Inequality Index of the 2016 Human Development Report of UNDP ranks India at 125 in a list of 159 countries.

Since it is nobody’s case that Muslims in India are altogether immune to the social impact of the Indian society including some of its ailments, a working hypothesis could be to accept these shortfalls as generally representative of the ground situation; at the same time, care is to be taken not to treat Muslim women as a monolithic category since like other large communities, it is also highly differentiated and heterogeneous. The Sachar Committee Report sheds much light on this.

A number of academic and field studies are available on the general condition of Muslim women as well as in different socio-economic segments. One study examined them in three categories: education, workforce participation and social mobility. Allow me to summerize its findings:

These, and other actual or alleged drawbacks, are often attributed to tradition based on socio- religious beliefs and practices. It is therefore essential in the first place to distinguish religion per se from practices attributed to it by tradition in individual societies.

The principle of equality and justice between men and women in terms of their rights and obligations is emphatically stated in Sura Al-Ahzab. This is reiterated in other places of the Holy Book. It is to be noted that Islam makes no distinction between secular and religious duties; also that in Islamic law a woman has an independent juridical personality. She has to be respected as a person.

When then, and how, did inequality creep in?

The answer to this question lies in the psycho-sociological totality that prevailed for centuries in most societies including Indian, and still does, and which can be summed up as a system of values and social practices that became and remain embedded in economy and culture and are referred to as patriarchy. Details, of course, vary from society to society; its overall impact was and remains a lessoning of the equal status of women.

Thus the equality bestowed by faith was diluted or denied by tradition and practice and replaced by subordination. An obvious result of this was overt or covert misogyny so vividly reflected in proverbs relating to women in most languages in use in Muslim societies.

This state of affairs is clearly contrary to tenets of faith. It is unethical and is harmful to the individuals and the community. It must change. Only then can women, as equal partners participate in the creation of a society that is humane. This requires meaningful correctives in social practices.

I asked a lady sometime back about empowerment of women. She said: ‘we are born empowered; life is created within us, through us.’

The validity of her response is evident. A child’s first lessons in life are received from the mother. Despite this, the fact remains that deep-rooted social handicaps diminish the full impact of this relationship. The conscious or sub-conscious perception in many segments of society is that the girl child is a burden, even a misfortune, on account of social evils like insistence on dowry outlawed though it is and many beliefs and practices associated with the institution of marriage.

Our present effort, through affirmative action initiatives of the government, or through voluntary initiatives, is to produce equity of varying intensity rather than substantive equality. It is clearly inadequate.

The challenge is to produce substantive gender equality so that women become active and equal partners in the creation of a humane society.

The first step in this direction is to be taken with the girl child, with her nourishment, education and inculcation of a sense of equality. Each of these has to be given adequate weight. The principal responsibility for this lies with the parents but for this to happen meaningfully, the social ambiance and the attitude of the husband has to change accordingly. The traditional societal bias towards a patriarchal relationship in the family unit has thus to give way to a relationship of equal partners.

The next step is at the nursery, primary and secondary school level where gender equality has to be practiced and be a part of the curricula. A supportive but essential element in this is obligatory physical training and yoga and encouragement to participate in sports of choice. The human potential for learning and excellence has no gender and class ceiling and experience shows that given opportunity the most deprived in both sexes can scale the heights.

Alongside is the question of preparing the younger generation for participation in the workforce and for requisite career planning. At present, according to World Bank data, it is only 27 percent for India as against 51 in Indonesia, 49 in Malaysia, 43 in Bangladesh, 30 in Sri Lanka and 25 in Pakistan. The Muslim women’s share of this 27 percent is barely 10 percent.

There is, surely, considerable room for improvement. Such an improvement would be in consonance with requirements of faith and necessitates individual and community effort since ‘Verily never will God change the condition of a people until they change it themselves.’ (s xiii.11).

This indeed is an imperative need of our times.