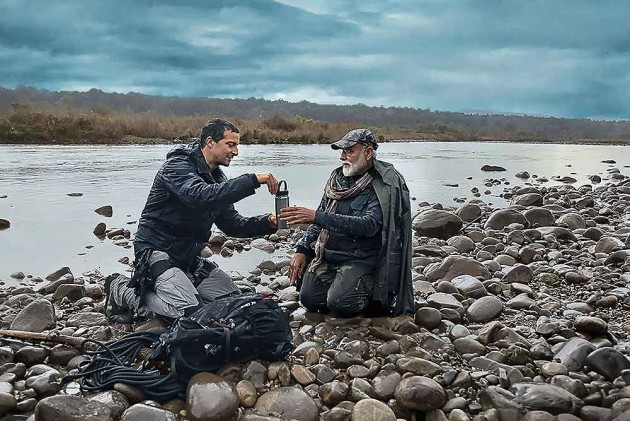 Prime Minister Narendra Modi and Bear Grylls during a conversation in the special episode of 'Man Vs Wild'
File Photo
PTI August 25, 2019 00:00 IST PM Modi Reveals How Bear Grylls Conversed With Him In Hindi In 'Man Vs Wild' Special Episode

How did Bear Grylls converse with Prime Minister Narendra Modi in the special episode of 'Man Vs Wild' when the famed adventurer and survivalist does not understand Hindi? -- This was the question several people have been pondering about after watching the show.

Modi gave out the "secret" on Sunday in his monthly radio broadcast 'Mann ki Baat'. He said technology was used extensively in the conversation between the two in the Jim Corbett National Park.

"Whenever I spoke, it was instantly translated into English. Bear Grylls had a small cordless instrument in his ear. So I used to speak in Hindi and he heard it in English... the communication became very easy. This is an amazing aspect about technology," the prime minister explained.

He said, with some hesitation, people do ask him as to how could Grylls understand Hindi.

"Was the episode edited later? How many times did the shooting happen for this episode and how it happened? They ask with great curiosity...There is no secret in this. Many people have this question in their minds, so I will unravel this secret. In a way it is no secret at all the reality is that technology was used extensively in my conversation with Bear Grylls," Modi said.

After the show's broadcast, a large number of people have been discussing about the Jim Corbett National Park, he said.

"You must also visit sites associated with nature and wildlife and animals. As I have said before, and I emphasise, that you must visit the northeast in your lifetime," he said.

Walking through the wild and taking a ride on a cold river in a makeshift boat were some of the things that Modi put up with as he teamed up with Grylls to promote causes close to his heart -- conservation of nature and cleanliness.