“Happy birthday to my beautiful mother in law….Iconic,” wrote Kareena Kapoor on her Instagram stories to wish her mother-in-law, Sharmila Tagore.

Kareena Kapoor Khan is a well-known actress who is constantly active on social media. On her Instagram account, the actress continues to share breathtaking photos and videos, as well as vital updates with her fans and followers. Last night, Kapoor went out partying with her friends and looked stunning in black. She used her Instagram stories today to wish her mother-in-law, Sharmila Tagore a happy birthday. 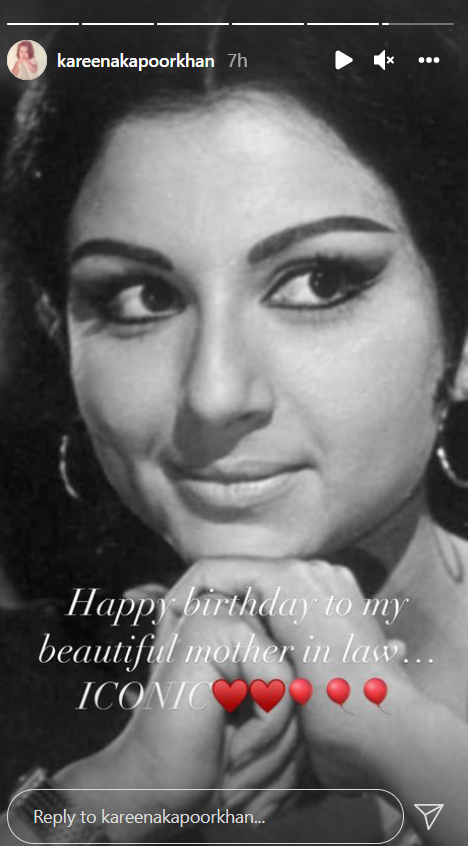 Today is the birthday of Saif Ali Khan's mother, Sharmila Tagore, and greetings have been pouring in from all corners. Kareena Kapoor Khan, her daughter-in-law, has sent her one of the most personal greetings. She shared a flashback photo of Sharmila Tagore on her Instagram stories. Tagore looks lovely in her retro appearance in the black and white photograph. Her beauty was enhanced by the iconic hairstyle, winged eyeliner, and flawless thin eyebrows. Kapoor wrote under this photo, “Happy birthday to my beautiful mother in law….Iconic.”

On the work front, Kareena Kapoor Khan will next be seen in 'Laal Singh Chaddha', opposite Aamir Khan. This is the official Hindi remake of Tom Hanks' 'Forrest Gump'. The movie was supposed to come out on Valentine's Day 2022, but it will now be released on Baisakhi 2022.

Naga Chaitanya and Mona Singh also star in the film. Viacom 18 and Aamir Khan Productions are promoting 'Laal Singh Chaddha'. The film was shot in Punjab, Himachal Pradesh, Ladakh, and Turkey, among other places. Advait Chandan is the director.