Film Review: De De Pyaar De Is Not For You If You Are Looking For A Logic
Advertisement
Home Art & Entertainment

Film Review: De De Pyaar De Is Not For You If You Are Looking For A Logic

Ajay Devgn’s latest release, De De Pyaar De is not devoid of regressive elements when it comes to objectifying women or peddling misogynistic stereotypes in the garb of a laugh riot in this film. 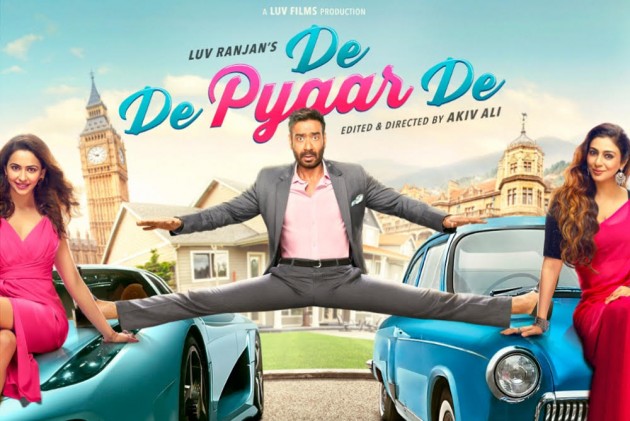 Bollywood has never been quite adept at tackling the romance of an old man with a young woman over the years. It either ends up making unintended erotica, or simply puts together a slapstick comedy about middle-class mores. Worse still, some of them have been highly misogynistic and sexist as well. Only a few filmmakers have been able to handle this “taboo” subject with care and sensitivity which it requires without being overtly didactic in the past.

Ajay Devgn’s latest release, De De Pyaar De is not devoid of regressive elements when it comes to objectifying women or peddling misogynistic stereotypes in the garb of a laugh riot in this film. But that should not be surprising enough given the fact that this rom-com about an odd couple comes from the stable of Luv Ranjan, the filmmaker known for films like Pyaar Ka Punchnama, its sequel and the last year’s big hit Sonu Ke Titu Ki Sweety. Although Ranjan has handed over the directorial baton to debutant Akiv Ali this time, DDPD carries forward the unmistakable and familiar template of Ranjan’s previous films.

Written by Luv Ranjan and Tarun Jain, DDPD revolves around a 50-year-old investment banker (Devgn) living in London who falls in love with a pretty young thing half his age (Rakul Preet Singh) and wants to marry her after having initial reservations. It is all about how all hell breaks loose when he brings his free-spirited ladylove to India to introduce her to his estranged wife Tabu and his kids on the eve of his daughter’s engagement.

What, however, saves the film from being a total washout are some good performances, especially by its main star cast. Rising above the script, Devgn, who is playing his age in this film, lends the authenticity to his character with his comic timing and so does Tabu, who is, as usual, brilliant as Devgn’s separated but sympathetic wife. Their chemistry and comfort level with each other is too perceptible to be missed here. Rakul, after her two previous failed attempts to make an impact in Bollywood, finally lands a role which offers her an opportunity to showcase her talent. Jimmy Shergill also impresses in a special appearance as a man besotted with Tabu.

DDPD is basically targeted at young audiences like all of Ranjan’s previous ventures. Thankfully, it is not overtly preachy or moralistic. Carping critics of his school of film-making will once again squirm over some of its one-liners and punch lines but his connect with the millennial audiences cannot be overlooked. You can endure the movie for the sake of some fun and laughs only if don’t intend to find anything logical or politically correct in every frame you see in a typical masala movie from Bollywood.