Diminished violence does not indicate a necessary decline in the capacity for terrorism, and there are clear indications that the infrastructure that supports and sustains the Kashmir jihad remains intact in Pakistan...

Jammu and Kashmir (J&K), the theatre of a raging high intensity conflict (more than 1,000 fatalities per annum) between 1990 and 2006, saw a continuation of declining trends in fatalities and a second consecutive year within the low intensity threshold. 541 persons, including 69 civilians, 90 Security Force (SF) personnel and 382 militants, were killed in 2008. Fatalities had fallen to 777, well below the high intensity mark, in 2007, from a peak in 2001, at 4,507. J&K has witnessed continuously declining violence since 9/11, bringing tremendous respite to the people of this terror-wracked state.

In its year-end review, the union home ministry stated that, during 2008 (data till November), terrorist incidents in J&K were down by 39 per cent, killings of civilians by 41 per cent and of SFs by 31 per cent, over the corresponding period of 2007. The level of infiltration across the Line of Control/International Border also saw a decline and, for the first time since 1990, the number of militancy-related incidents, according to J&K Police data, dropped below the four-figure mark to approximately 703 in 2008. The J&K Director General of Police (DGP), Kuldeep Khoda, stated on December 25, 2008, that the year witnessed an exceptional decrease of 40 per cent in militancy-related incidents compared to 2007, the largest such decline since 1990. The highest number of militancy-related incidents stood at 5,946 in 1995. 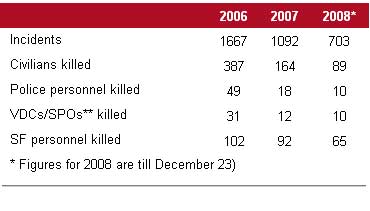 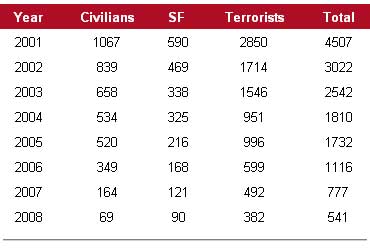 The diminution in violence was further underlined by the fact that civilian casualties, at 89 in 2008, fell below the 100 mark for the first time since 1990. Even SF fatalities stood at 85.

382 militants were killed in counter-terrorism operations across J&K in 2008, including some top ranking commanders. These included at least 67 category ‘A’ terrorists, and 27 category ‘B’ terrorists.

Steps initiated to check infiltration from across the border have had significant success. For the first time since 1990, the number of militants operating in J&K is estimated to have fallen below 1000. On December 24, 2008, DGP Khoda told reporters at the year-end briefing on the security situation in the state, "There are around 577 local militants and 231 foreigners operating in the state. These are figures based on information from various agencies working on the ground… The measures taken along the Line of Control and International Border have resulted in lesser number of militants infiltrating into the state. There have been casualties among the infiltrators which means the efficiency in preventing infiltration has improved."

Attempts to strengthen political and civic participation in governance received a noteworthy boost in the Legislative Assembly elections, which were held in seven phases in November-December 2008. A record number of 1,353 candidates contested from 87 Assembly constituencies in 2008 as against 709 in 2002 and 547 earlier in 1996. For the first time since the beginnings of terrorism in the state, 4,277 political/public meetings were held by various parties, 2,281 in Kashmir and 1,996 in Jammu, including 1,115 small, 2,516 medium and 646 large meetings.

The overall improvement in the ground situation was dramatically reflected in a voter turnout averaging 63 per cent during the seven phases of the 2008 elections, as compared to 43.6 per cent in the 2002 elections, which were held under the shadow of the gun. Significantly, all terrorist groups and their sympathetic and front organizations, including factions of the Hurriyat Conference [the All Parties Hurriyat Conference (APHC) and the Tehreek-e-Hurriyat (TeH)] had announced a boycott of the elections and issued threats of retaliation against those who participated, but these were, evidently, rebuffed by a public long weary of extremist excesses and endless strife.

The National Conference (NC) emerged the single largest party in the elections, securing 28 seats (20 in Kashmir, six in Jammu and two in Kargil), while the People’s Democratic Party (PDP) was second with 21 seats (19 in Kashmir and 2 in Jammu). The Congress party was victorious in 17 seats (13 from Jammu region, three from Kashmir and one from Leh), while the Bharatiya Janata Party (BJP) prevailed in 11 constituencies. The National Panthers Party won three seats and the Communist Party of India-Marxist, the People’s Democratic Front and the Democratic Party (Nationalist) secured one each. Independents won in four constituencies. Forty-four seats constitutes a mark in the 87-strong House. The NC leader Omar Abdullah assumed office as the new Chief Minister of J&K, with the Congress extending support to his party and joining the Government.

The success of the elections also needs to be assessed against the backdrop of the extended Shri Amarnath land agitation which had virtually paralysed and apparently polarized J&K through July-August 2008, and which had, at one point, raised a question-mark over the very possibility of the elections being held on schedule. The agitation impacted dramatically on both sides of the Pir Panchal and led to the deaths of at least 51 civilians (Kashmir – 42; Jammu – 9) and injuries to another 1,473 (Kashmir – 979; Jammu – 494). 333 SF personnel were also injured during the 62-day agitation (Jammu – 182; Kashmir – 151). Apart from the socio-political impact of the agitation, which is bound to linger for some time, there were serious economic costs incurred before order was restored. The Chamber of Commerce and Industry (CCI) president Ram Sahai claimed in Jammu on September 1, 2008, that the economy of the Jammu region had suffered a loss of INR 9,980 crore during agitation. Sahai said the industrial and tourism sectors were affected the most during the turmoil. He pegged the losses to the tourism trade (hotels, lodges, restaurants, cinemas) sector at INR 3,050 crore and of the industrial sector at INR 4,050 crore.

J&K also saw increasing tensions along the Line of Control (LoC) and international border. Defence Minister A. K. Antony informed the Parliament on October 20, 2008, that, "Pakistan had violated the five-year-old pact on ceasefire 58 times since the ceasefire agreement came into effect from November 2003. And since January 2008, Indian positions on the LoC have been fired upon 34 times, while the total cease-fire violation by Pakistan has occurred on 58 counts." He, however, indicated that ingress across the LoC/border was decreasing: "Infiltration bids in Jammu and Kashmir from across the International Border are on decline, today. There were only 243 infiltrators during April to September 2008 as against 419 infiltrators during the same period last year. During the current year, 193 terrorists were killed while 157 were arrested in the same period this year. A multi-tier arrangement, including deployment of troops, surveillance devices, Line of Control fence, state and central security forces, has proved effective in discouraging infiltrators."

On a more general level, the secular decline in violence witnessed since September 2001 can be attributed to Pakistan’s compulsions arising out of its domestic difficulties, the American and international pressure on Islamabad, and the continuing successes of the counter-insurgency grid in J&K. Diminished violence, however, does not indicate a necessary decline in the capacity for terrorism, and there are clear indications that the infrastructure that supports and sustains the Kashmir jihad remains intact in Pakistan, despite the recent crackdown in that country. Lt. Gen. P.C. Bhardwaj, the General Officer Commanding-in-Chief of the Northern Command, told reporters on January 15, 2009, that "a number of terrorists training camps are still active in Pakistan." While the exact present number of these camps is not available, official sources had disclosed in September 2008 that there were 45 such camps. Notwithstanding the recent crackdown on the LeT and its front the Jama’at-ud-Da’awa (JuD), sources indicate there are currently at least 1,500 militants waiting at mobile and temporary launch pads for an ‘opportunity’ to infiltrate into J&K. These militants have reportedly been divided into small groups (each comprising of 75-80 men) and have been kept, in readiness, across the Line of Control/International Border. Reports also indicate that the Inter-Services Intelligence (ISI), Pakistan’s external intelligence agency, is training women to carry out militant attacks. During interrogation of a woman arrested in the state, during the first week of January 2009 by the J&K Police for providing logistical support for JeM and LeT militants, it was disclosed that the ISI is inducting women into militancy. The arrested woman reportedly confessed that she was trained by the ISI in the Bhiber and Kotli forests in Pakistan occupied Kashmir (PoK), and that there were presently about 700 women receiving arms training in different militant camps run by the ISI.

The unstable domestic scenario in Pakistan has impacted significantly on the Kashmir jihad, though it has not yet led to any change in the establishment’s intent or the infrastructure that supports and orchestrates terrorist violence on Indian soil. There is, nonetheless, a definite pause, and a shift within J&K, with Islamabad increasingly attempting to nurture a cohesive political voice in its favour. To this end, efforts are directed towards uniting various pro-Pakistan groups, including the two factions of the main secessionist formation, the APHC. The objective appears to be to gradually transform the predominantly terrorist movement into a more wide-based movement of political extremism, backed by calibrated terrorist operations, to secure a stronger position at the negotiating table and achieve what has not been possible on the ground through terrorism alone.

Crucially, the decrease in levels of violence in J&K is not due to any change in Pakistani intent, but is rather the consequence of "changes in capacities and compulsions in Pakistan." The multiplicity of crises in Pakistan has diluted Islamabad’s capacities to sustain past levels of terrorism in J&K,

…particularly since a large proportion of troops had to be pulled back from the Line of Control (LoC) and the international border for deployment in increasingly violent theatres in Balochistan, NWFP [North West Frontier Province] and the FATA [Federally Administered Tribal Areas]… Pakistan's creeping implosion has undermined the establishment's capabilities to sustain the 'proxy war' against India at earlier levels.

Another important element in the decrease in violence in J&K is the progressive shift in the terrorists’ focus to the Indian heartland. 336 civilians and 27 SF personnel died in Pakistan-backed Islamist terrorist attacks outside J&K in 2008 in locations as varied as Bangalore, Rampur, Jaipur, New Delhi, Ahmedabad and Mumbai – attacks engineered principally by terrorists groups that were earlier limited in their campaigns to J&K. In significant contrast, 69 civilians died in the whole of J&K through 2008. In the immediate future, it is anticipated that Pakistan-based terrorist groups will continue to sustain calibrated levels of violence in J&K and simultaneously carry out terrorist attacks on soft targets in the Indian heartland. Such a shift offers Pakistan greater ‘deniability’, and also enables it to harness the grievances – real or perceived – among Indian Muslims.

Pakistan’s intentions, notwithstanding a change in regime and international pressure, remain unchanged as far as the Kashmir jihad is concerned. The only noticeable shift is in strategy and tactics. Crucially, Pakistan’s Islamist terrorist reserves remain intact. In fact, no Islamist terrorist group, including those focusing on Kashmir, has been effectively neutralized in Pakistan since 9/11. As radical Islamist mobilization and a belligerent posture on Kashmir remain integral to Pakistan’s internal politics – both for the ‘democratic’ parties and the Army – consequently, regardless of the significant and continuing decline in terrorist violence in the state, a stable peace still remains a distant prospect in J&K.

Why India Is Not A Secular State