'Do Not Allow Proliferation Of Sensitive Technologies Into Dangerous Hands'

Among other things, the oil prices and the nuke deal remain on the PM's mind as he reiterates, "We do not have the luxury of limiting our options of energy sources" 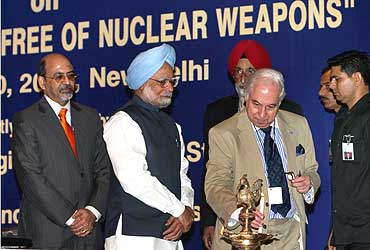 We take great pride in hosting this International Conference on a subject that touches upon the very survival of humankind. Twenty years ago, on this day, our former Prime Minister, Shri Rajiv Gandhi addressed the Third Special Session on Disarmament of the UN General Assembly.

Speaking on the theme of  "A World Free of Nuclear Weapons" he introduced an Action Plan calling on the international community to negotiate a binding agreement on general and complete disarmament. At the heart of the Action Plan was a commitment to eliminate all nuclear weapons in three stages by 2010.

Rajiv Gandhi believed that disarmament, in particular nuclear disarmament, was essential to usher in a safe and non-violent world. He had a deep insight into the nature of evolution of technology, its potential for advancing human welfare as also for unleashing destruction. In this context he was acutely aware of the power of the atom. He wished that it should never again be used for destructive purposes.

A review of developments since 1988 presents a mixed picture on how far the world has moved to realise the vision of Rajiv Gandhi. On the one hand, the end of the Cold War has created an opportunity for the world to move away from the dangerous doctrines that were based on the precept of Mutually Assured Destruction. Greater engagement and realization of the inter-dependent nature of global security among major powers has created new space for action on disarmament. In 1993, the Conference on Disarmament was able to finalise the Chemical Weapons Convention, a multilateral, non-discriminatory and internationally verifiable treaty aimed at eliminating an entire category of weapons of mass destruction by a fixed date, namely 2012.

On the other hand, the painful reality is that the goal of global disarmament, based on the principles of universality, non-discrimination and effective compliance, still remains a distant one.

Even more disturbing, however, is the emergence of new threats and challenges to global security. I refer to the growing risk that nuclear weapons may be acquired by terrorists or those driven by extreme ideologies; the increasing danger of non-state actors, accessing nuclear materials and devices; the development of new weapon systems based on emerging technologies which pose challenges to space security and provide new roles for nuclear weapons; and the weakening of multilateralism even as bilateral arms control processes falter in shifting strategic landscapes.

The threat of climate change and global warming itself raises a range of security concerns, especially for us in the developing world.

India, which has witnessed rapid economic growth in the last few years, and is poised for even higher growth rates in the future, needs a peaceful international environment so that we can focus our resources on improving the lives of our people. We seek a world in which power flows through the empowerment of people, and from the strength and resilience of our economy, our society, our institutions and our values.

Our energy needs will continue to rise in the foreseeable future. We do not have the luxury of limiting our options of energy sources. We therefore wish to create an international environment in which nuclear technology is used not for destructive purposes but for helping us meet our national development goals and our energy security.

India is fully aware of its responsibilities as a nuclear weapon state. We have a declared doctrine of no first-use that is based on credible minimum deterrence. We have in place strict controls on export of nuclear and fissile related materials and technology. India has no intention to engage in an arms race with anyone. Above all, India is fully committed to nuclear disarmament that is global, universal and non-discriminatory in nature. The pursuit of this goal will enhance not only our security but the security of all other countries.

It is in keeping with this approach that India has recently submitted a Working Paper on Nuclear Disarmament to the UN General Assembly, containing initiatives on nuclear disarmament. We hope to stimulate a debate and promote consensus on the way forward. These proposals have also been submitted before the Conference on Disarmament in Geneva. They are a set of practical measures for working towards the goal of a nuclear weapons free world. We do not wish to exclude other measures that may contribute to achieving this goal nor do we hold that there is a rigid hierarchy among these steps and a specific sequencing for their implementation. The measures we suggest include:

These proposals retain the spirit and substance of the Rajiv Gandhi Action Plan. We hope that other states will agree to a dialogue on these proposals, and will join us in committing to nuclear disarmament. That is the critical first step – a commitment, preferably a binding legal commitment through an international instrument, to eliminate nuclear weapons within a time bound framework. In parallel with this general commitment to nuclear disarmament, we need strengthened non-proliferation commitments such as on denying nuclear material, technology and equipment to terrorists. Pending global nuclear disarmament, all states must ensure that they do not allow proliferation of sensitive technologies into dangerous hands.

India is ready to add its own weight and voice to the global debate on nuclear disarmament with a view to crafting such a consensus on disarmament and non-proliferation. We need a collective approach anchored in a universal partnership that is supported by non-governmental communities and public opinion.